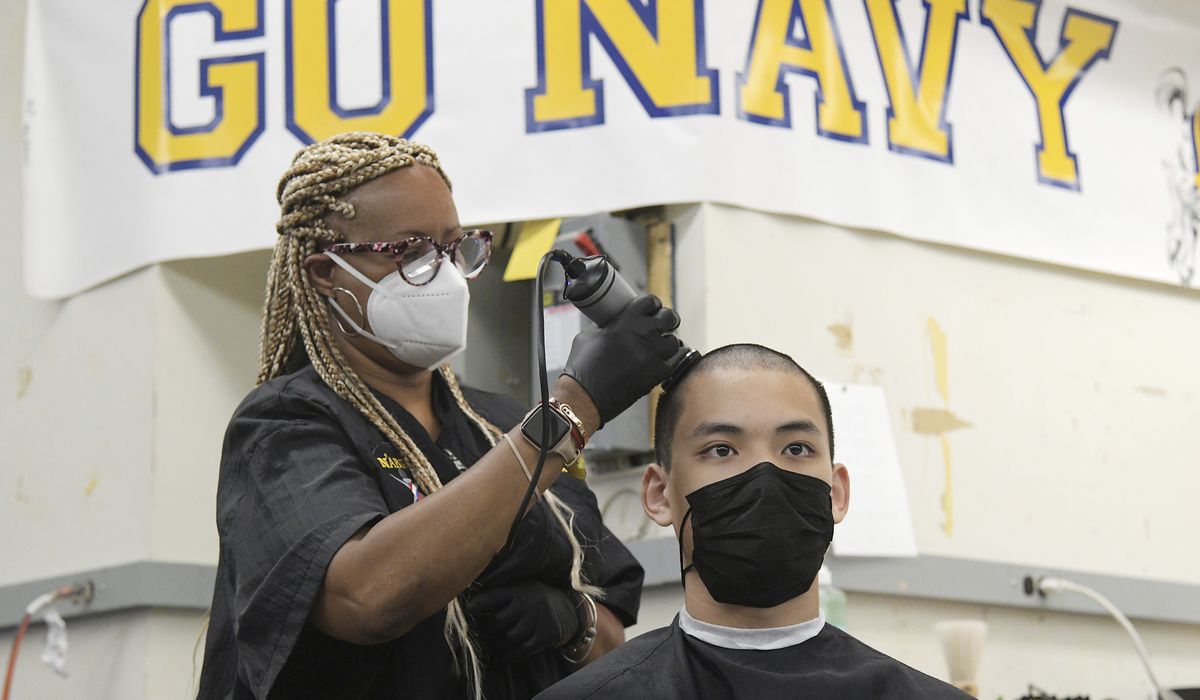 ANNAPOLIS — There were no group pictures or tearful hugs from parents crowded outside Alumni Hall on Tuesday as the U.S. Naval Academy’s Class of 2024 began the first stage of their lives as future officers in the Navy or Marine Corps.

For generations, incoming freshmen at the Naval Academy, known as plebes, arrived at the historic campus on the banks of the Severn River with family members at their side.

But this year, the Plebes were unceremoniously dropped off at the in-processing building by a parent who was then quickly hustled off the campus.

Welcome to Induction Day at Annapolis in the age of Coronavirus.

“Our No. 1 priority is safety,” said Commander Kelly Laing, the officer in charge of Plebe Summer. “We’ve asked our parents to please refrain from being on the Yard to minimize the risk of a spread.”

The stripped-down ceremonies reflect a U.S. military still adjusting to life under COVID-19 just as the civilian world has had to do. The pandemic has affected everything from deployment schedules and recruiting targets to the missions of giant aircraft carriers, forced into port as the disease ravaged their young crews.

Just two months ago, an iconic milestone of plebe life — the “Herndon Climb” up the greased

granite obelisk on the academy grounds that signals the end of the plebe’s first year — fell victim to the COVID-19 quarantine and was indefinitely postponed.

Still, amid all the uncertainty, a new class of about 1,200 plebes will be going through this year’s modified induction period. Where it usually takes a single day to complete the process, this year it has been extended to four days.

Induction Day, or I-Day, activities include a full medical screening, with the first of at least two COVID-19 tests but a minimal draw of equipment. Many of the check-in procedures that usually occur on I-Day will take place at a later date, Navy officials said.

Most of the medical checks were taking place in a basketball arena at Alumni Hall. Draped over the medical tables and examination rooms was a movie screen showing female plebes how to tie their hair up into a regulation bun.

“Before last year, the women had to keep their hair cut shorter,” said Ensign Joshua Engler, a newly-commissioned officer helping out with the intake.

The male incoming plebes were told to get a buzz cut before they showed up at the naval academy. But just in case, several barber chairs at Alumni Hall were ready to provide regulation haircuts.

Orville Nyblade, 18, from Burley, Idaho, didn’t need to make an extra trip to the barber shop. Tightly grasping his medical and personnel records, he stood in line Tuesday waiting for the next station in the processing period. The oddness of the day did not detract from the massive turning point it marks in a young person’s life.

Mr. Nyblade, who wants to fly Navy helicopters some day, has seen YouTube videos of past Induction Days. With everyone in masks and maintaining proper social distancing, he realized this year would likely be different.

“I think they’re doing a great job,” he said, just before moving on to the next table.

Following I-Day, the new plebes will go into a 72-hour waiting period followed by a two-week restriction of moment, known in Navy-speak as an ROM.

“We need to prove that every one of them is negative,” for COVID-19, said Commander Laing. The plebe’s only contact during the period will be with a roommate, but they will be assigned a laptop computer for online training.

“We’re going to teach them all kinds of lessons, from sexual assault prevention to basic military indoctrination,” Commander Laing said.

Another COVID-19 test will be done at the end of the two-week period. If negative, the new plebes will finally be introduced to the upper-class Midshipmen, known as Detailers, who will be their primary trainers during the summer.

With the arrival times staggered, there were none of the traditional long lines of plebes stretching around Alumni Hall waiting to be processed.

Maximus Lear, 18, from Las Vegas, hadn’t really thought of a military career until he heard about the chance to attend the prestigious Naval Academy. Now he wants to be a fighter pilot after he graduates.

“I’m not scared. I’m excited,” he said. “This all seems to be running pretty smoothly. I’m impressed.”

Ensign Engler hails from Okeechobee, Fla., about 100 miles south of Orlando. Like the incoming plebes, his graduation ceremony this summer was overhauled because of COVID-19.

Defense Secretary Mark Esper and other top officials addressed the virtual graduation in a pre-recorded video, a video in which the Navy’s top officer, Adm. Mike Gilday, had to miss because he was quarantining after a family member was exposed to the coronarvirus.

“I watched it from my couch,” Ensign Engler recalled. “It was nice being able to watch it on TV rather than sitting in the sun, but it definitely didn’t feel as special.”

The new plebes are likely surprised that their I-Day experience has been brisk and businesslike rather than a boot camp-type experience that they might have expected, Ensign Engler said.

“Nobody is really yelling at them today,” he said. “But, they don’t really have that comfort like they would on a normal I-Day when they get to say good-bye to their families.”

Incoming plebes receive a training handbook called Reef Points filled with facts and figures about the military and the academy that they are required to commit to memory. Ensign Engler noted the Class of 2024 will have two extra weeks to study the manual before they face the customary grilling from upperclassmen.

“I’d be expecting them to know everything at the end of the two weeks,” he said. “They won’t have any excuse if they don’t know their” Navy ranks.

Naval academy officials expect that some of the incoming plebes will probably test positive for COVID-19. That has been the case at other service academies. Any plebe testing positive will be kept isolated as they receive medical care.

Following the initial two-week quarantine period, the Class of 2024 will be formed into companies of 30 plebes and nine upper-class Detailers. They will live together, eat together and train together for the rest of the summer, Commander Laing said.

Plebes will be allowed to call home at least twice during their training and are encouraged to write letters but, because of health concerns, there are still no plans to allow family visits.

The formal swearing-in ceremony, normally a capstone event on I-Day, will occur later in the training period. The event will be live-streamed for families to watch, officials said.

“This is a year that’s been very unique and very different,” Commander Laing said.