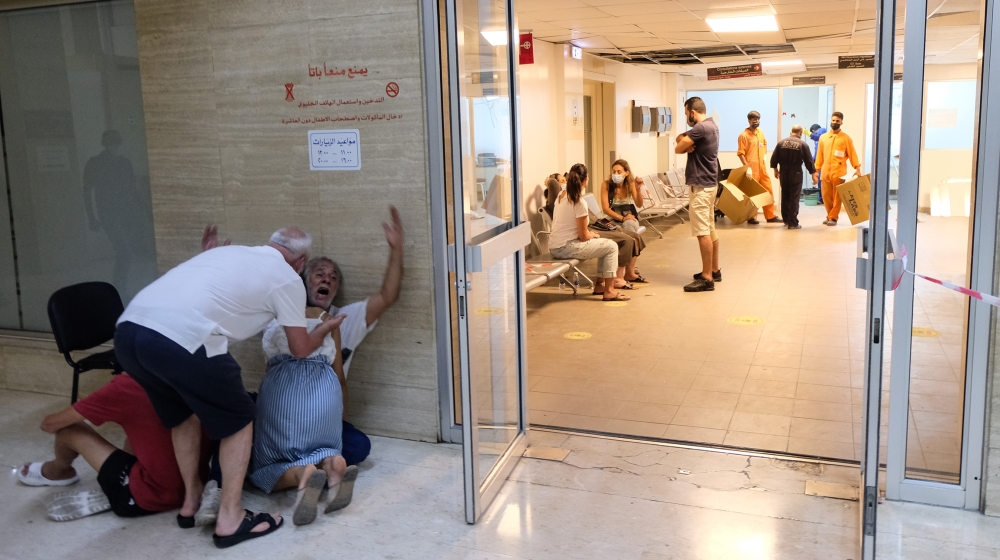 Beirut, Lebanon – A government-led investigation is under way in Lebanon to probe the cause of the massive explosion that ripped through the capital, Beirut.
The government announced on Wednesday that those responsible for guarding and storage at Beirut’s port – the epicentre of the blast – would be placed under house arrest “as soon as possible,” after the disaster left at least 137 dead and 5,000 wounded.
Damages from the explosion, which officials have linked to some 2,750 tonnes of ammonium nitrate stored at the port, may be worth up to $15bn, Beirut Governor Marwan About said.
As the debris is cleared, anger has turned to rage after revelations that officials knew the highly volatile material had been stashed at Beirut’s port for more than six years.
A top-trending hashtag in Lebanon on Wednesday was #علقوا_المشانق, or “hang up the nooses”.
Ramez al-Qadi, a prominent TV anchor, tweeted: “Either they keep killing us or we kill them.”
As heat rises around the country’s decision-makers, some have sought to deflect blame onto other branches of the state – including Lebanon’s judiciary.

Public Works Minister Michel Najjar told Al Jazeera that he had only found out about the presence of the explosive material stashed in Beirut’s port 11 days before the explosion, through a report given to him by the country’s Supreme Defense Council. He had taken over the post six months earlier.
“No minister knows what’s in the hangars or containers, and it’s not my job to know,” Najjar said.
The minister said he followed up on the matter, but in late July, Lebanon’s government imposed a new lockdown amid a rapid increase in new COVID-19 cases. Najjar eventually spoke the general manager of the port, Hasan Koraytem, on Monday.
He said he asked Koraytem to send him all the relevant documentation, so that he could “look into this matter.”
That request came too late. The next day, just after 6pm (15:00 GMT), a warehouse at the port exploded, gutting the harbour and wrecking large parts of Beirut.
Najjar said he learned on Wednesday that his ministry had sent at least 18 letters to the Beirut urgent matters judge since 2014, asking for the goods to be disposed of. Najjar declined to provide the documents to Al Jazeera, citing a continuing investigation into the cause of the explosion.
“The judiciary didn’t do anything,” he said. “It’s negligence.”
But Nizar Saghieh, a leading Lebanese legal expert and founder of NGO Legal Agenda, said the “primary legal responsibility here is on those tasked with overseeing the port – the port authority and the public works ministry, as well as Lebanese Customs.”
“It is certainly not up to a judge to find the safe place to house these goods,” he told Al Jazeera.
Popular scepticism
Many angry Lebanese are demanding accountability and answers as to how and why 2,750 tonnes of highly explosive material was stored near residential Beirut for more than six years.
Management of the port has been split between a range of authorities. The port authority runs the operation of the port, and its work is overseen by the public works and transport ministry.
Lebanon’s customs agency nominally controls all goods that enter and exit the country, while the Lebanese security agencies all have bases at the port.
Few Lebanese feel confident they will see justice for this latest disaster in the country’s history, pointing to the lack of official accountability for the period of rampant corruption and mismanagement in the years after the country’s civil war.

Prime Minister Hassan Diab has promised this time will be different.
He is heading an investigation committee that includes the justice, interior and defence ministers and the head of Lebanon’s top four security agencies: the Army, General Security, Internal Security Forces and State Security.
The committee has been tasked with reporting its findings to Cabinet within five days, and Cabinet, in turn, will refer those findings to the judiciary.
In the meantime, officials in the executive authority, including Najjar, a minister in Diab’s government, have attempted to cast suspicion on Lebanon’s judiciary.
The case against the judiciary
The ammonium nitrate that blew up on Monday arrived in Beirut, reportedly by chance, on board a vessel facing technical issues in September 2013.
By 2014, the cargo had been unloaded and stored at Hangar 12 at Beirut’s port – now a deep crater filled with turquoise seawater.
Public documents verified by Al Jazeera show that Lebanese Customs sent six letters to the Beirut Urgent Matters Judge between 2014 and 2017, urging the judge to get rid of the “dangerous” material by either exporting it, re-selling it or handing it to the Army.

BackPage 1 of 2Next →
In this article:Anger, rises