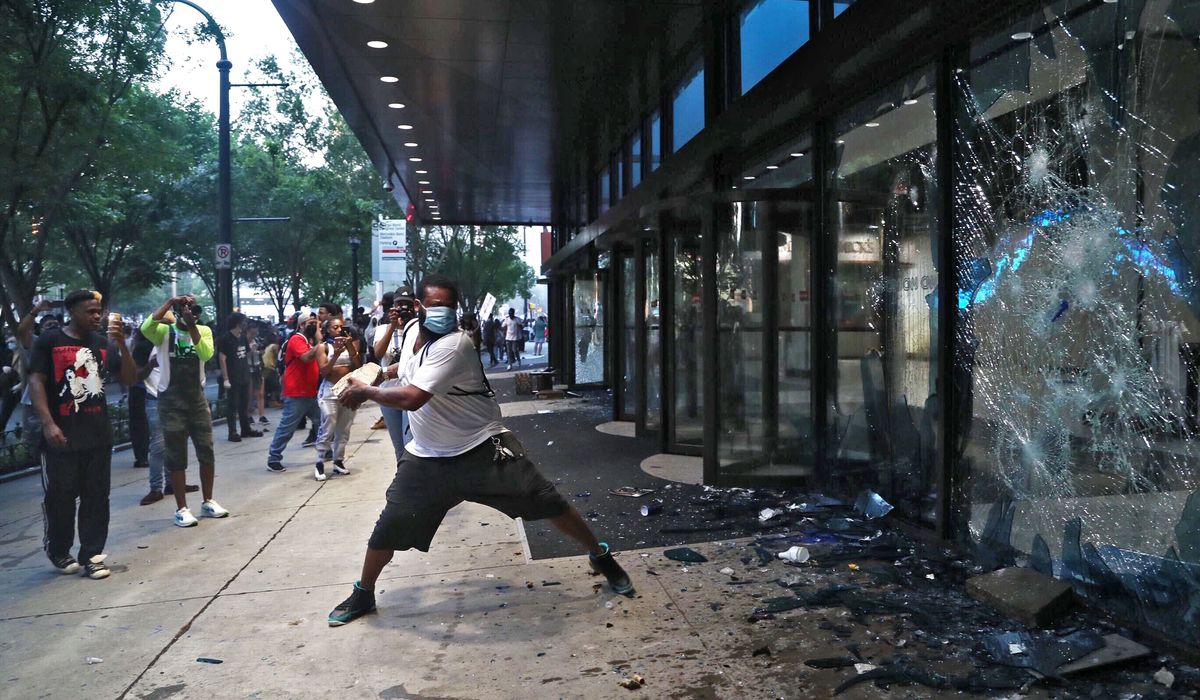 An angry mob outraged at the death of George Floyd stormed CNN’s world headquarters Friday night in Atlanta, vandalizing the building’s facade, breaking windows, and tossing a firecracker or smoke bomb at officers blocking the entrance.

Video posted by CNN personalities and others showed demonstrators in a large, rowdy crowd jumping on police cars outside the CNN Center, which was defaced with graffiti, setting fires, and throwing rocks and bottles.

Police reacted by deploying tear gas and making some arrests, as shown on video.

“That is the CNN world headquarters,” said CNN host Chris Cuomo. “Police had been outside, and then as the crowds advanced on CNN, and they were on top of the CNN logo and spray-painting things on it, and they started to light cars on fire and become increasingly violent, we had the police move inside CNN and then the windows of CNN were broken. And so you had a big point of ingress.”

The crowd was one of many that gathered at major cities across the nation to protest the death of Mr. Floyd, 46, who died Monday in Minneapolis after an officer kneeled on his neck during an arrest for using a phony $20 bill at a grocery store.

“What you’re seeing live on CNN is vandalism in the lobby of CNN Center in Atlanta. So disturbing to see,” tweeted CNN “Reliable Sources” host Brian Stelter. “FYI: Our control rooms and newsroom employees are several floors and locked doors away. The coverage continues, no matter what.”

The last moments of @CNNValencia’s live shot from the entrance of the CNN Center in Atlanta before he moved to another location. pic.twitter.com/B7ZlYyt6xz
— Oliver Darcy (@oliverdarcy) May 30, 2020

—@CNNValencia reporting from *inside* the CNN Center in Atlanta as demonstrators throw a smoke bomb inside and officers attempt to hold the line. pic.twitter.com/SH8w3IOkTo
— Oliver Darcy (@oliverdarcy) May 30, 2020

“They’re telling our stories, and you are disgracing their building,” Ms. Bottoms said at a Friday press conference.

She cited Atlanta’s history of black mayors, police chiefs and business owners as well as the city’s tradition of peaceful civil-rights protest.

“So what I see happening on the streets of Atlanta is not Atlanta,” Ms. Bottoms said. “This is not a protest. This is not in the spirit of Martin Luther King, Jr. This is chaos.”

She added, “When you burn down this city, you’re burning down our community.”

CNN reporter Nick Valencia said the crowds began showing up at 3 p.m., throwing rocks at 7 p.m., and set a car on fire shortly before 8 p.m., which “really instigated this crowd.”

“It was earlier tonight that our crew got shot with what we believe was a BB gun,” said Mr. Valencia, adding, “These are demonstrators that are very, very upset here tonight, and they came here to confront police. There’s no peacefulness about this at all whatsoever.”

He also said that the agitators outnumbered police officers by about 4:1.

Protesters turned out Friday night at a number of U.S. cities, including Los Angeles, New York City and Washington, D.C., in reaction to the death of Mr. Floyd, who is black. Former cop Derek Chauvin, 44, who is white, was charged Friday with third-degree murder and manslaughter in his death.

Beirut, Lebanon – Violent demonstrations were witnessed on the streets of central Beirut as protesters gathered in the heart of the capital near the main entrance to parliament, which has been heavily fortified with barbed wire, steel gates and metal plates.  Protesters lobbed stones, firecrackers and street signs at riot police, who fired water cannons,… 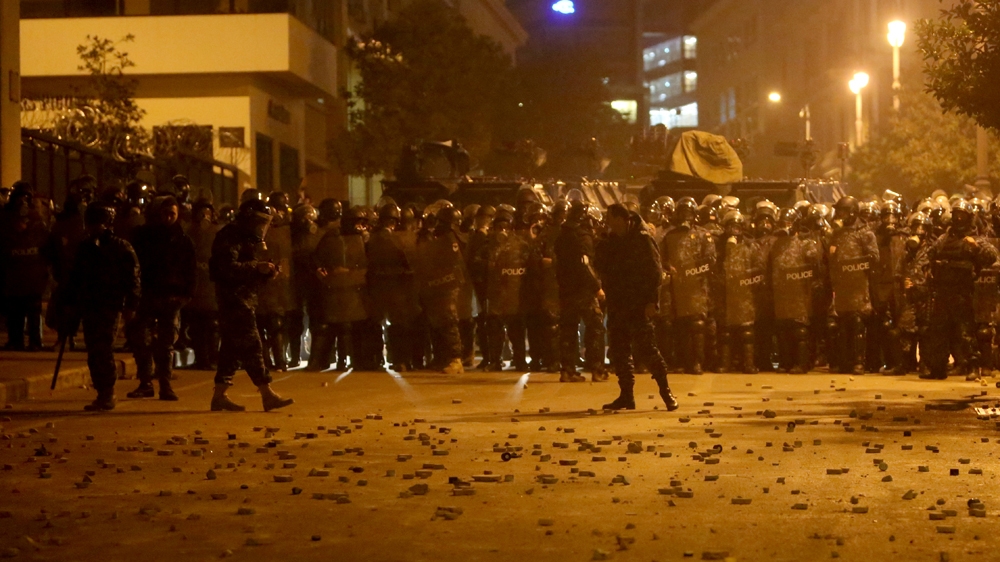 Beirut, Lebanon – Violent demonstrations were witnessed on the streets of central Beirut as protesters gathered in the heart of the capital near the main entrance to parliament, which has been heavily fortified with barbed wire, steel gates and metal plates.
Protesters lobbed stones, firecrackers and street signs at riot police, who fired water cannons, tear gas and rubber-coated bullets in a bid to clear the area.
Security forces stood behind the fortified wall as reinforcements were sent to block demonstrators from passing through via parallel roads in the area.
More:

A lost eye, the ‘price paid for demanding your rights’ in Lebanon

Lebanon announced the formation of a new government on Tuesday following three months of political blockade. However, the protesters say the new government comprises the same people they have been rallying against since October 17.
“We want the government to work according to our needs. If not, to hell with them,” said Mohammed, a 23-year-old protester who is from Tripoli, in the country’s north, and who was present in the Beirut demonstrations.
“If anything, the old cabinet that we rallied against is slightly better than this ‘one colour’ government,” he said, using a term to describe the new cabinet backed by Hezbollah and its allies.
Protesters have been calling for sweeping reforms and a government that is led by independent technocrats and that can deal with the crippling economic crisis and widespread corruption.

Protesters reject members belonging to the current political elite, which has ruled Lebanon since the end of its civil war in 1990 and is considered responsible for the country’s economic crisis.
“They’re still stealing from us. We don’t have electricity, we don’t have hospitals, and we are starving to death,” Mohammed added.
“We’re forced to escalate, the revolution is no longer peaceful … we gave them a chance for 30 years.”
‘They’re playing with us’
Lebanon has been without an effective government since caretaker Prime Minister Saad Hariri, under pressure from protests against state corruption and mismanagement, resigned in October.
The country’s newly appointed Prime Minister Hassan Diab pledged on Tuesday that his government “will strive to meet their [the protesters’] demands for an independent judiciary, for the recovery of embezzled funds, [and] for the fight against illegal gains”.
He also said his cabinet will adopt financial and economic methods different from those of previous governments, amid the country’s worst economic crisis in decades.
But protesters insist that only a government of independent experts will have what it takes to save the country. Calls to dismantle ruling parties, which include groups that transitioned into politics since the country’s civil war, have also been a major demand of the protesters.
“It’s bullsh*t … they’re playing with us. They are the same people with different faces,” Stephanie, a 30-year-old protester, said of the new government. “People are here because they have no jobs and they’re trying to tell the government that a change if needed.
“But nothing is happening … they’re still robbing us, torturing us, [and] treating us like we don’t deserve anything good,” she said.

“When they put people like us in charge, people who really want to help us get out of this, I will go home,” added Stephanie.
Despite a heavy security presence, people chanted slogans against Prime Minister Diab. Security forces responded by firing water cannons to disperse the crowds.
“They’re here throwing water [cannons] at us and I don’t even have water at home,” Stephanie shouted in dismay.
Some protesters attempted to throw tree branches above the fence that separates them from the entrance of parliament.
Ambulances rushed to the outer roads of the protest site and sirens wailed as dozens ran to escape clouds of tear gas.
‘We’re all desperate’
In the last few months, the country’s local currency, pegged to the dollar for more than two decades, dwindled. The Lebanese pound lost more than 60 percent of its value in recent weeks on the black market.
The economy has seen no growth, and international transfers dried up in the already heavily indebted country, which relies on imports.
“This is really sad,” 25-year-old Hamza said of the current economic situation.

“We don’t deserve this. They control our jobs and our economy,” he said of the government, which he described as an “oligarchy”.
Like many young people in Lebanon, Hamza said he still hasn’t managed to finish college due to a lack of funds.
He turned around to look at the protesters throwing stones near the front lines and said: “Everyone throwing rocks right now doesn’t have money … we are all desperate.”
The violence on Wednesday resembled that from last weekend, when two days of escalation marred the mostly peaceful protests that began in October last year.
More than 460 people have been wounded in the protests. Despite the violence, many teenagers continue to take part in the protests.
Tasneem, aged 15, told Al Jazeera that she fears for her future and wants to live in a country where she feels “protected”.
“I want an education … Until now I feel like there is no future for me.”
Continue Reading…