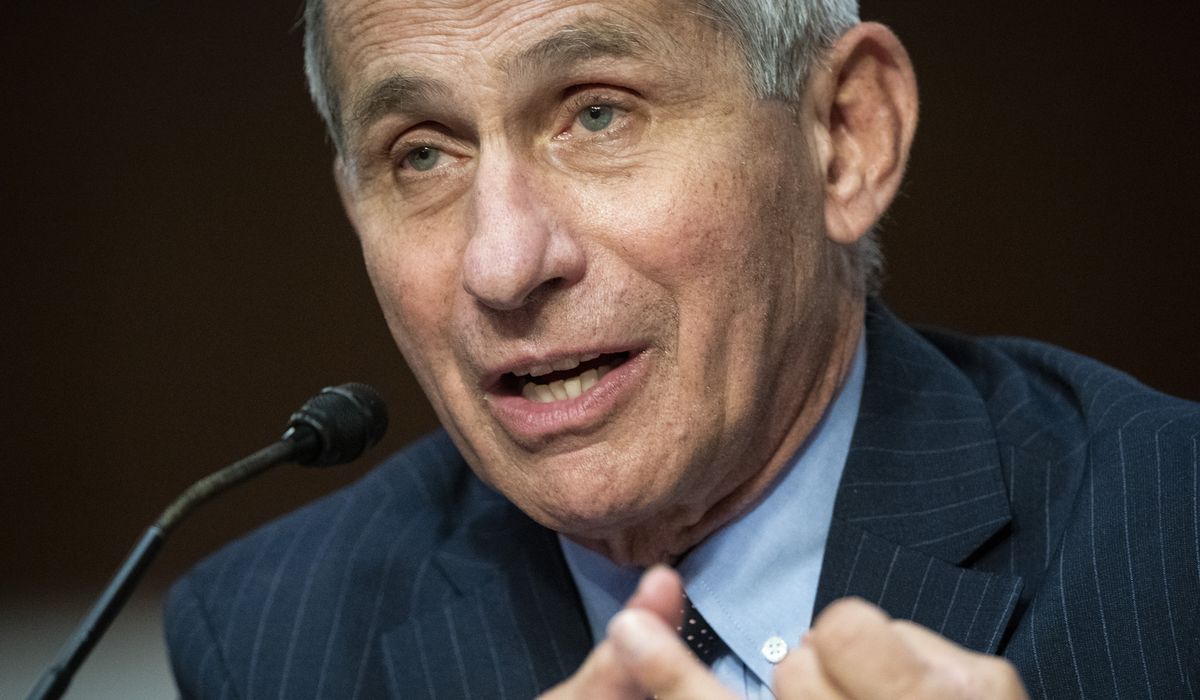 The government’s disease fighters told Americans on Tuesday to wear masks and take “personal responsibility” for stamping out the pandemic, warning the nation is heading in the wrong direction as hospitalizations rise in a dozen states and Arizona sees more deaths per day.

Dr. Anthony Fauci, who leads infectious disease research at the National Institutes of Health, warned that the country could have an eye-popping 100,000 new cases per day if Americans keep flouting social distancing rules.

“We’re now having 40-plus thousand new cases a day,” Dr. Fauci told the Senate Committee on Health, Education, Labor and Pensions. “I would not be surprised if we go up to 100,000 a day if this does not turn around. So I am very concerned.”

The director of the Centers for Disease Control and Prevention, meanwhile, said Americans should “embrace the universal use of face coverings” as cases surge across the Sun Belt.

“Specifically, I’m addressing the younger members of our society, the millennials and the Generation Zs. I ask those that are listening to spread the word,” Dr. Robert R. Redfield said, as governors warn that young people are packing into bars and flouting safety guidelines.

Dr. Redfield said he is disappointed with airlines that plan to fill their planes to capacity in violation of social distancing guidelines, which call for 6 feet of physical separation. He said the agency is reviewing the situation.

“We don’t think it’s the right message,” he testified at the same hearing.

Members of Mr. Trump’s coronavirus task force sounded the alarm as the European Union extended its ban on American travelers while opening its borders to visitors from more than a dozen other countries, including Canada.

The U.S. is recording tens of thousands of new infections per day, as states like Florida, Texas and California report a summertime surge amid their attempts to reopen businesses and institutions.

The rate of those testing positive is increasing in hot spots, leading experts to worry that the disease is rampant. The nationwide death toll, meanwhile, has reached 126,000.

“Despite what President Trump says, this pandemic is not fading — far from it,” said Sen. Patty Murray, Washington Democrat.

Arizona’s rolling average for daily deaths jumped to 35 this past week compared with 21 the week before, according to data tracked by The Washington Post. Gov. Doug Ducey, a Republican, late Monday ordered bars, gyms, movie theaters and water parks to close for at least 30 days.

Governors in over a dozen states have paused reopening plans or closed bars to try to reverse concerning trends. New York and New Jersey are rethinking plans to allow indoor dining again, citing bad experiences in other states and their desire to avoid another crisis after getting slammed early on.

“Bars — really not good, really not good. Congregation in a bar, inside, is bad news,” said Dr. Fauci, the director of the National Institute of Allergy and Infectious Diseases.

He said governmental safety recommendations should be seen as a means for getting back to normal rather than top-down directives.

Committee Chairman Lamar Alexander, Tennessee Republican, said Mr. Trump, who hasn’t used the bully pulpit to encourage mask-wearing, should lead the way by wearing a mask at least once in a while.

“The president has millions of admirers. They would follow his lead,” Mr. Alexander said.

Former Vice President Joseph R. Biden, who is likely to face Mr. Trump in the November election, held up a mask as he spoke to reporters in Wilmington, Delaware.

“Wear a mask. It’s not just about you,” Mr. Biden said. “It’s about your neighbors, it’s about your colleagues, it’s about keeping other people safe. … It may be inconvenient, it may be uncomfortable, but it’s the right thing to do as an American.”

Masks and social distancing techniques are considered society’s main tools for preventing the virus’ spread as scientists work on a vaccine.

Dr. Fauci said there is “no guarantee” that an effective vaccine will be developed, but he is cautiously optimistic that doses will be available by early next year.

In the meantime, Mr. Alexander said, it will be critical to help schools and colleges looking to reopen this fall.

“The question before the country today is not about whether to go back to school or college or child care or work, but how to do it safely,” he said. “Even though COVID-19 has not, in general, hurt young children and college-age students nearly as much as older or more vulnerable Americans, there is some health risk. But in my view, the greater risk is not going back to school.”

Dr. Fauci said the ability to open schools safely may depend on the situation in each district.

“If we adhere to guidelines about physical distancing, use of masks, that will help keep the level of infection in the community down,” he said. “That will make it easier to get children back to school.”

Sen. Rand Paul, Kentucky Republican, said there is no evidence that schools fuel the spread of the coronavirus. In lengthy remarks, he railed against “central planning” and “political correctness” in evaluating and responding to the virus.

Dr. Fauci said he feels “very strongly” that children should get back into school. He also said experts are forced to offer recommendations based on limited data and that he isn’t telling sports leagues they cannot play. Rather, he said, he has been outlining facts about the virus before player associations and others decide whether to proceed.