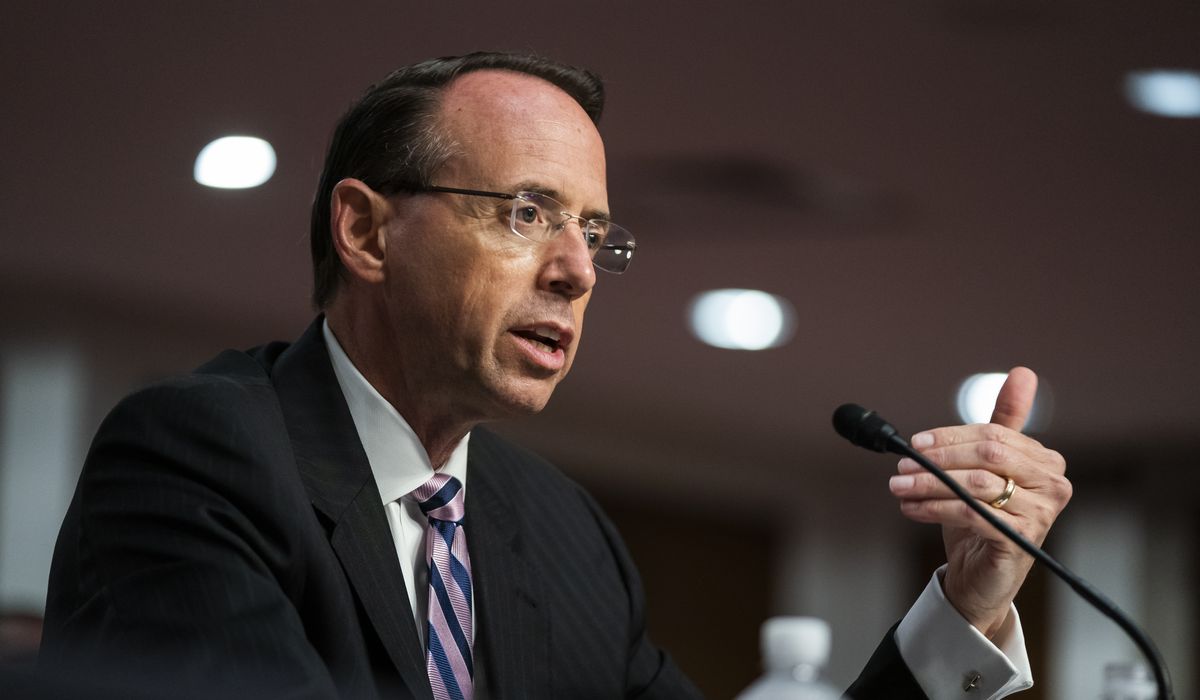 Former Deputy Attorney General Rod Rosenstein said Wednesday that he would never have signed off on a surveillance warrant for Trump campaign adviser Carter Page if he had known about the FBI’s errors and omissions, and he faulted Obama-era officials for misleading him about the warrant’s accuracy.

Mr. Rosenstein, testifying before the Senate Judiciary Committee as part of the panel’s deep dive into the origins of the Russia probe, also defended his decision to name a special counsel to investigate President Trump.

Although Robert Mueller did not find any criminal conspiracy by any Americans, and even given what he now knows about the biases of some of Mr. Mueller’s team and about the mishandling of some political investigations, it was still justified, he said.

But he said that was not the case for the FBI’s decision to surveil Mr. Page, which started under the Obama administration but continued through 2017, when Mr. Rosenstein signed off on a fourth and final warrant under the Foreign Intelligence Surveillance Act.

“If you knew then what you know now, would you have signed the warrant application?” asked Sen. Lindsey Graham, South Carolina Republican and the panel chairman.

Though he said the warrant “appeared to be justified based on the facts it alleged,” he was never told key facts, including exculpatory information.

Justice Department Inspector General Michael Horowitz last year concluded that the Page warrant had more than 17 errors and omissions and that an FBI attorney doctored evidence.

Mr. Rosenstein portrayed his role in signing off on the warrant as little more than a final check that a process had been followed. He said he trusted that the FBI was doing its job properly.

“My understanding is these FISA applications followed a very rigorous process and they were accurate and verified,” he testified. “The whole principle of having an agent sign it under oath is that you can rely on the facts.”

“You didn’t ask,” Mr. Cruz said. “You didn’t actually bother to drill in and say, ‘Show me the background. You know this might be the most important case we got in the whole country. Let me actually do more than just rubber-stamp the document put in front of me.’”

At the White House, press secretary Kayleigh McEnany said Mr. Trump was “dismayed” by Mr. Rosenstein’s testimony, though she didn’t say what, exactly, struck him.

“A Republican campaign was spied on by a Democratic presidency, a Democratic administration, based on a dossier paid for by his opponent, Hillary Clinton, and the DNC. It is the biggest political scandal that we’ve seen,” the spokeswoman said. “We hope to get to the bottom of this because it should never be done again to any president of either political party.”

Mr. Rosenstein was once a favorite figure among anti-Trump lawmakers. Democrats considered legislation to try to keep him in charge of the Mueller investigation and warned of a constitutional crisis should the president either bypass him to fire Mr. Mueller or oust Mr. Rosenstein himself.

But Mr. Rosenstein made clear Wednesday that he sees the Mueller report as an exoneration of the president. He said the investigation found no evidence that Americans conspired with Russia to subvert the 2016 election and that there wasn’t any case to make against Mr. Trump for obstruction of justice.

Mr. Graham said it was clear by summer 2017 that there was no evidence of conspiracy. The FBI by that point knew the Steele dossier was largely erroneous and perhaps Russian disinformation, and knew the key figures under investigation — Mr. Page, former National Security Adviser Michael Flynn and Trump adviser George Papadopoulos — did not conspire with the Kremlin.

Yet Mr. Rosenstein in August 2017 wrote a memo defining the scope of Mr. Mueller’s investigation, allowing him to pursue the conspiracy claim.

“I believe at the time, senator, and I still believe it was the right decision under the circumstances,” Mr. Rosenstein told Mr. Graham. “I think it’s important to establish that an independent investigation found that the Russians sought to interfere in the election and that no Americans conspired with them.”

Democrats complained that the hearing was a distraction from important business.

They said the committee should be investigating the death of George Floyd in Minneapolis at the hands of a white police officer or how law enforcement is responding to the civil unrest that followed.

“I was wondering today if the people who tuned into this hearing … must think they are watching a rerun, a classic hearing of several years ago on the Mueller report,” said Sen. Richard J. Durbin, Illinois Democrat. “But unfortunately, this is not a rerun. This is the priority of the Senate Judiciary Committee today. Today in June of 2020.”

Mr. Rosenstein was reluctant Wednesday to place specific blame for the FBI’s bungles on the surveillance warrant. He said he is confident the bureau and its boss at the Justice Department, Attorney General William Barr, will figure out what went wrong and fix it.

But he did accuse Andrew McCabe, who took over as acting FBI director in 2017 after Mr. Trump fired James B. Comey, of not being fully candid with him.

Mr. Rosenstein, who wrote the memo that justified Mr. Comey’s firing, said Mr. McCabe knew about Mr. Comey’s memos of his conversations with Mr. Trump but withheld that information for a week after becoming acting director.

Mr. McCabe fired back in a statement saying that was “completely false.”

“Mr. Rosenstein’s testimony is completely at odds with the factual record,” he said. “It looks to be yet another sad attempt by the president and his men to rewrite the history of their actions in 2017. They have found in Mr. Rosenstein — then and now — a willing accessory in that effort.”

Mr. Rosenstein also denied a 2018 report in The New York Times that he suggested secretly recording Mr. Trump and pondered recruiting other officials to get behind an effort to use the 25th Amendment to remove the president from office.

“I did not suggest or hint at secretly recording President Trump,” he told the committee. “I never in any way suggested the president should be removed from office under the 25th Amendment.”

Sen. Ted Cruz recently had advice for Joseph R. Biden, regarding the circumstances under which the Democratic presidential nominee should debate President Trump. “Biden’s two conditions: (1) the debate must occur in his basement, and (2) it cannot be televised or broadcast to anyone in America,” the Texas Republican quipped in a tweet. Do likely… 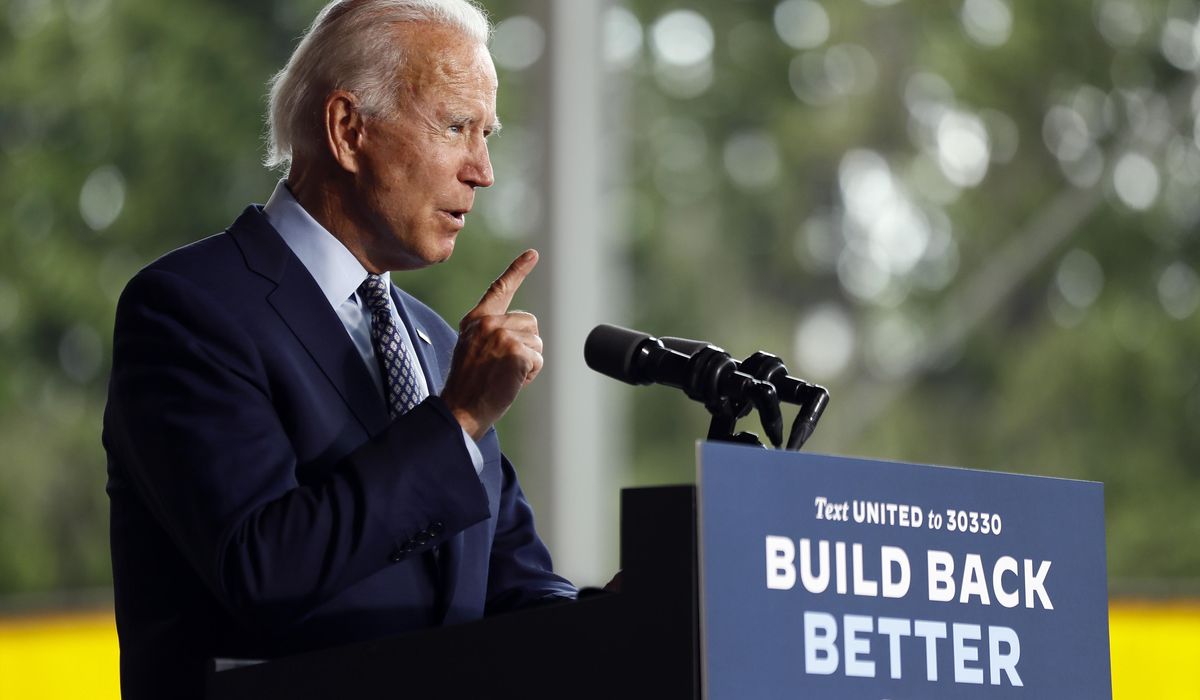 Sen. Ted Cruz recently had advice for Joseph R. Biden, regarding the circumstances under which the Democratic presidential nominee should debate President Trump.

“Biden’s two conditions: (1) the debate must occur in his basement, and (2) it cannot be televised or broadcast to anyone in America,” the Texas Republican quipped in a tweet.

Do likely voters think that Mr. Biden could manage such a high profile showdown?

A slim majority — 54% — believe he is actually “capable” of a debate with the president according to a Rasmussen Reports survey released Tuesday.

And the inevitable partisan breakdown: 77% of Democrats believe Mr. Biden could pull it off, compared to 32% of Republicans and 49% of independent voters.

There’s a lot riding on the debate, meanwhile. The survey also found that 68% of likely voters say it’s important that Mr. Biden participate in the traditional bout while 56% say it would hurt the Biden campaign if the candidate opted out of it.

“38% of all voters, including 20% of Democrats, believe Biden is suffering from some form of dementia. Sixty-one percent think it is important for him to address the dementia issue publicly,” the analysis said.

Former Colorado Gov. and current Democratic Senate candidate John Hickenlooper said Wednesday that he will support presumptive Democratic presidential nominee Joseph R. Biden for president, even though he believes the sexual assault allegation against the former vice president is true “to a large extent.” In his second debate this week against his Democratic primary opponent,… 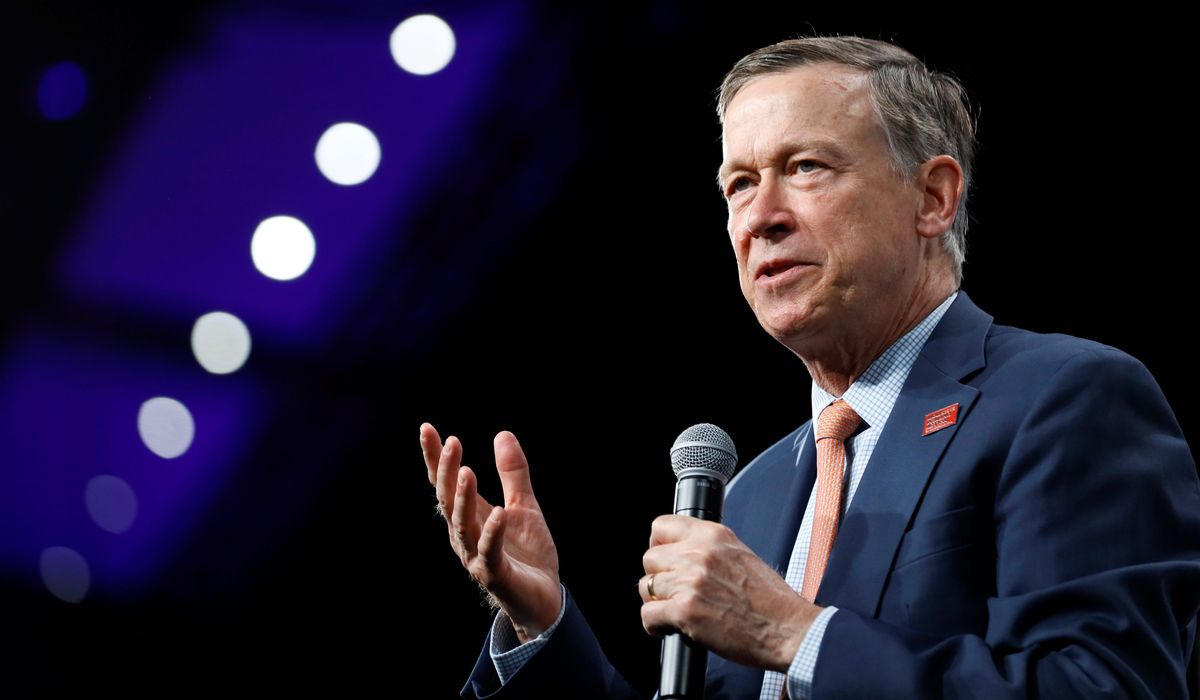 Former Colorado Gov. and current Democratic Senate candidate John Hickenlooper said Wednesday that he will support presumptive Democratic presidential nominee Joseph R. Biden for president, even though he believes the sexual assault allegation against the former vice president is true “to a large extent.”

In his second debate this week against his Democratic primary opponent, former Colorado House Speaker Andrew Romanoff, Mr. Hickenlooper was asked whether he believed the allegations by Tara Reade, a former Senate staffer who accused then-Sen. Biden of pinning her against a wall and digitally penetrating her without her consent in his Senate office in 1993.

At least six people have corroborated parts of Ms. Reade’s story since she first spoke out on March 25, but Mr. Biden has vehemently denied the claims.

During Wednesday’s debate, Mr. Hickenlooper commended Ms. Reade for coming forward and said she deserved to be believed.

“It’s standard that you go through a process of vetting and examination of these types of allegations, and this is certainly a very complicated case,” he added. “In the end, I still support Joe Biden for president, absolutely.”

The moderator asked the former governor to clarify his answer.

“To a large extent, yes,” responded Mr. Hickenlooper, who ended his own presidential campaign last summer.