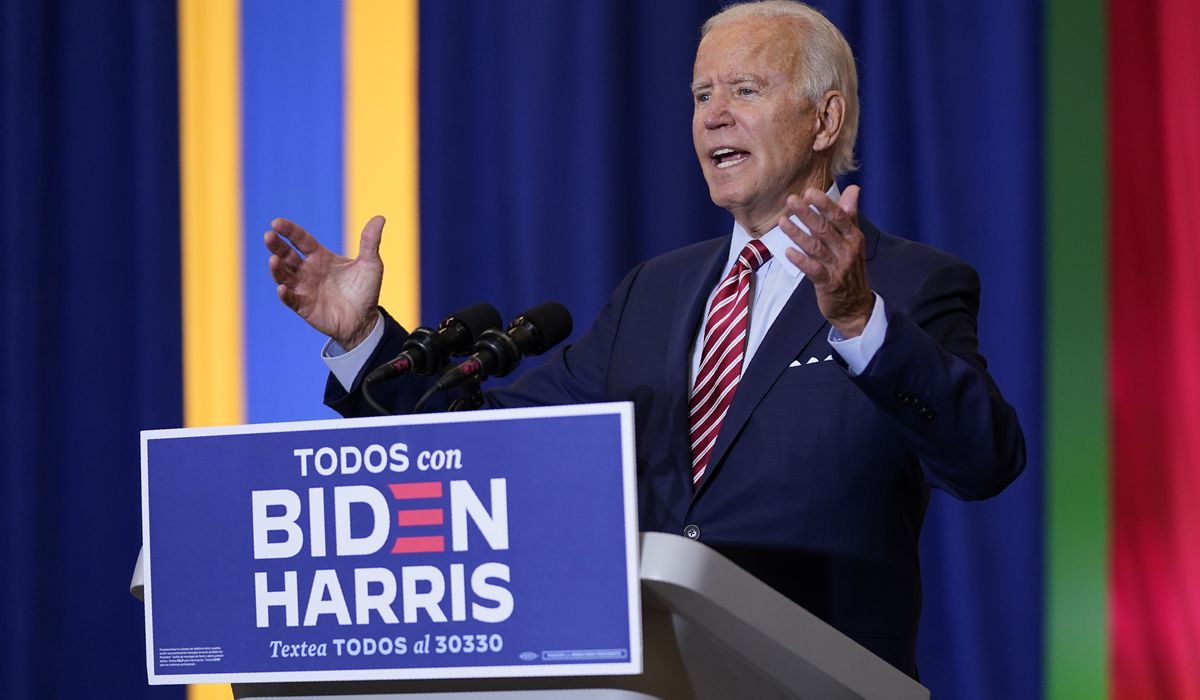 Joseph R. Biden traveled to Florida on Tuesday to muster support among Hispanic voters, a key constituency where he is struggling to match Hillary Clinton’s 2016 numbers.

Mr. Biden said it’s an “easy” case to make that Latinos would be better off on issues like education, health care, immigration, and the coronavirus pandemic if President Trump is ousted from office.

“It’s about talking about jobs, it’s about to be willing to step up and provide opportunities for people,” Mr. Biden said while traveling in the Sunshine State. “He should get off the damn golf course and sit down in the Oval Office and sit with both Republicans and Democrats and get something done.”

It was his first in-person visit to the key battleground state as the Democratic presidential nominee.

While there, Mr. Biden laid out a new plan aimed at investing in and modernizing Puerto Rico, which has been hit hard by hurricanes in recent years.

The plan doesn’t address the thorny issue of statehood, but it calls for forgiving disaster relief loans to towns and municipalities, expanding access to free COVID-19 health care services, and auditing Puerto Rico’s debt, among other items.

“I happen to believe statehood to be the most effective means of ensuring that residents of Puerto Rico are treated [equally], with equal representation at a federal level,” Mr. Biden said at an event in Kissimmee to kick off Hispanic Heritage Month. “But the people of Puerto Rico must decide and the United States federal government must respect and act on that decision.”

“Even after being president for nearly four years, Donald Trump doesn’t seem to grasp that the people of Puerto Rico are American citizens already,” Mr. Biden said. “I’m not going to throw paper towels at people whose lives have just been devastated by a hurricane. The world saw that – it was mortifying.”

He also held a roundtable event for veterans earlier in the day in Tampa.

Mr. Biden, who served eight years as vice president under former President Barack Obama, vowed this week to “work like the devil” to turn out “every Latino and Hispanic vote.”

“They gotta go higher,” he said of his numbers with Hispanic voters.

Some Democrats assumed Mr. Trump’s continued push for a U.S.-Mexico border wall and his generally tough immigration policies would turn off Latino voters in 2020.

But Cuban Americans, which make up a sizable percentage of Florida’s Latino population, are deeply skeptical of the Obama administration’s push to normalize relations with the communist island country and Mr. Biden’s pledge to reinstate those policies.

“As the daughter of Cuban immigrants, that is something that is personally very disturbing to me,” said Florida Lt. Gov. Jeanette Nuñez.

Mr. Biden has also struggled to reconcile his push for a path to citizenship for 11 million illegal immigrants in the U.S. with the more than 3 million deportations under Mr. Obama, who was branded the “deporter-in-chief” by pro-immigrant activists.

Ms. Nuñez said Democrats’ taking the Latino vote for granted is going to come back to bite them again.

The former vice president did hold a 5-point, 50% to 45% lead over Mr. Trump among registered voters in Florida, according to a Monmouth University poll released on Tuesday that showed him performing better among Latinos compared to other recent surveys.

His 58% to 32% lead among Hispanic voters specifically was still only about in line with Mrs. Clinton’s margins in the state, which she lost to Mr. Trump by a little more than a percentage point four years ago.

Patrick Murray, director of the Monmouth University Polling Institute, said an influx of residents from Puerto Rico and a growing number of younger voters in the state could be giving Mr. Biden a boost.

“These groups tend to be more Democratic, which actually suggests that Trump could be doing slightly better among older Latino voters than he did four years ago,” Mr. Murray said.

A former aide to Sen. Bernard Sanders’ presidential campaign launched a group earlier this year intended to turn out Latinos in key states.

One of the mail pieces features Kristin Urquiza, a speaker at the Democratic National Convention who talked about her father’s dying of COVID-19 and saying that his only “pre-existing condition” was trusting Mr. Trump.

“Through ongoing outreach, Latino voters in these battleground states will get all of the information they need in English and Spanish to vote for Biden,” Mr. Rocha said.

Other polling released on Tuesday that was conducted for a set of pro-immigrant advocacy groups found that Mr. Trump’s attacks on Mr. Biden’s immigration record aren’t necessarily landing – though the numbers were mixed.

“The findings reiterate what we know: the swing voter backlash to Trump’s flagrant, anti-immigration rhetoric and policies is a vulnerability that Democrats must seize,” said Tyler Moran, executive director of the Immigration Hub, one of the groups that commissioned the survey.