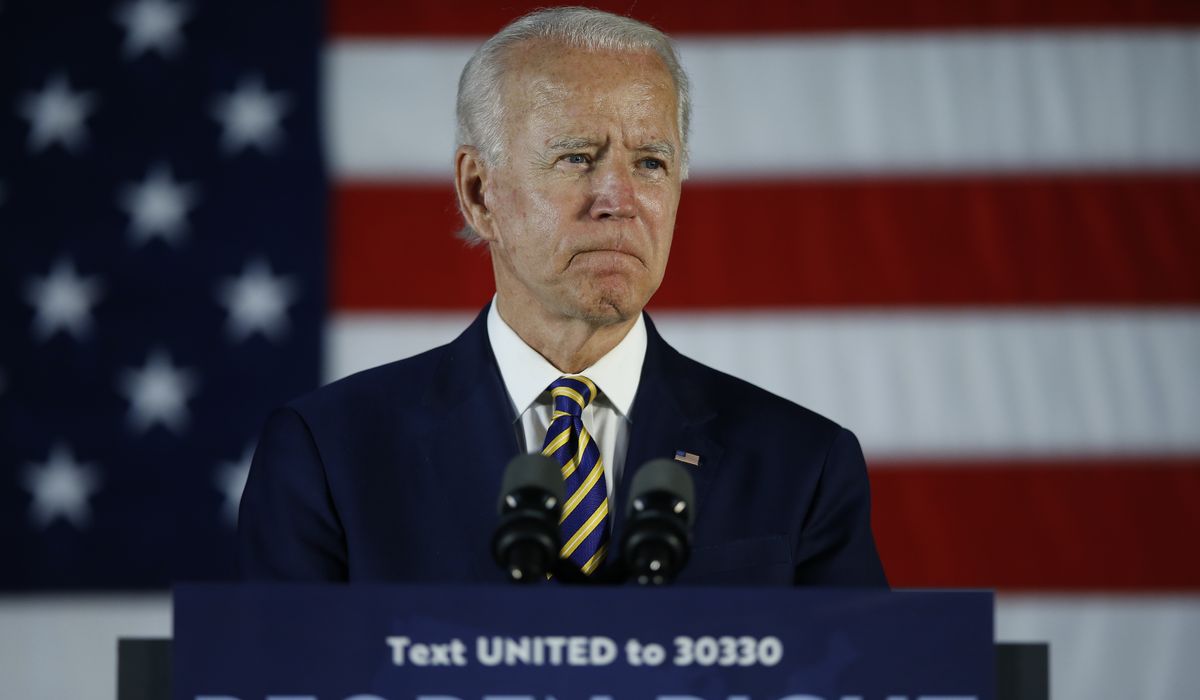 The former vice president said Mr. Trump is trying to shift the spotlight away from his failings.

“Make no mistake: This visit is a distraction,” Mr. Biden said. “It’s a distraction from Donald Trump’s failed response to combat the spread of COVID-19.”

Mr. Trump on Tuesday is scheduled to survey part of the border wall in Arizona and deliver remarks at a Student for Trump rally at Dream City Church.

He said Mr. Trump should instead focus his attention on the nation’s lack of coronavirus testing and the lack of a clear “reopening plan that’s rooted in science and public health.”

“Mr. President, this disease is rearing its head in Arizona again, and families are hurting,” Mr. Biden said. “Arizonans deserve a President who will rise to the moment amid the challenges we face today.” 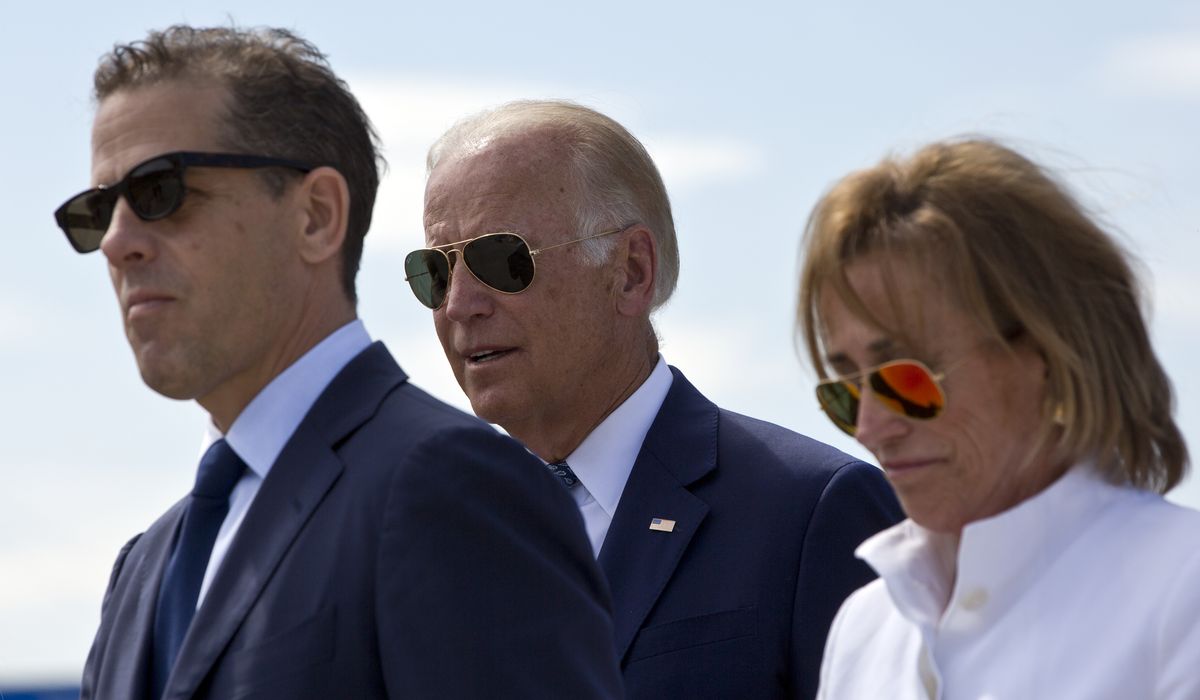 President Trump chose to make an issue of Hunter Biden’s cash haul from Russia, Ukraine and China with the implication that unsavory figures were trying to buy Vice President Biden and the Obama administration.

“When somebody gets 3½ million dollars from the mayor of Moscow,” Mr. Trump said.

“That’s is not true. That report is totally false,” Mr. Biden said.

A Senate Republican report by the Homeland Security and Governmental Affairs Committee says Mr. Trump is right, though it was not Moscow’s mayor, but his wife, whom the U.S. suspects of corruption in attaining billionaire status.

Hunter Biden received a single wire transfer of $3.5 million from Elena Baturina. The Senate report said she became a billionaire through illegal construction contracts awarded by her husband, since deceased.

The Senate narrative is not specific, but the types of transaction records match the description of confidential suspicious activity reports that the Treasury issues when it suspects illegal activity.

“That report was written for political reasons,” Mr. Biden said.

Mr. Trump asserted, “Once you became vice president, he made a fortune in Ukraine, in China, in Moscow and various other places.”

Mr. Biden responded, “That is not true.”

According to the senators’ Treasury records, it is true.

In April 2014, President Obama made Mr. Biden the point man in Ukraine, after the Russian invasion, to persuade leaders to rid the country of rampant corruption.

The next month, Hunter Biden showed up on the board of directors of the energy company Burisma Holdings, which the State Department considers corrupt, as it does its oligarch owner, Mykola Zlochevsky. Hunter Biden’s business partner, Devon Archer, already had secured a spot.

Over the years, Burisma paid the two more than $4 million. Treasury records show that 48 wire transfers from May 2014 to February 2016 totaled $3.4 million. The money went to Rosemont Seneca Bohai, a shell company run by Mr. Archer in partnership with a Chinese investment fund.

On China, Vice President Biden promoted closer ties to the communist regime on many fronts. He traveled to China in 2013 on Air Force Two and took along Hunter, who met with Chinese businessmen.

But the Senate report documents extensive ties between Hunter Biden and various Chinese entities that produced millions of dollars in wire transfers.

In one example, China’s CEFC Infrastructure Investment wired $5 million to HudsonWest LLC, a New York company jointly owned by Hunter Biden and Chinese interests. HudsonWest then sent $4.7 million to Hunter Biden’s law firm. The next year, another $1 million was delivered.

When the bank contacted James Biden’s wife, Sara, to learn details, she refused to cooperate, the Senate report said.

“Hunter Biden has extensive connections to Chinese businesses and Chinese foreign nationals that are linked to the Communist government,” the Senate report said. “Those contacts bore financial fruit when his father was vice president and after he left office.”

The Senate report also said Hunter Biden sent money to Ukrainian and Russian women. The Treasury reports said the transactions are linked to “what appears to be an Eastern European prostitution or human trafficking ring.”

Joe Biden: Trump ‘looks down on us’

Joseph R. Biden leaned into his recent populist messaging Wednesday as he kicked off a train tour of eastern Ohio and western Pennsylvania, saying President Trump looks down on Americans who might be struggling. “I think it’s more than ignoring us,” Mr. Biden said in Cleveland. “I look at things from [a] Scranton perspective —… 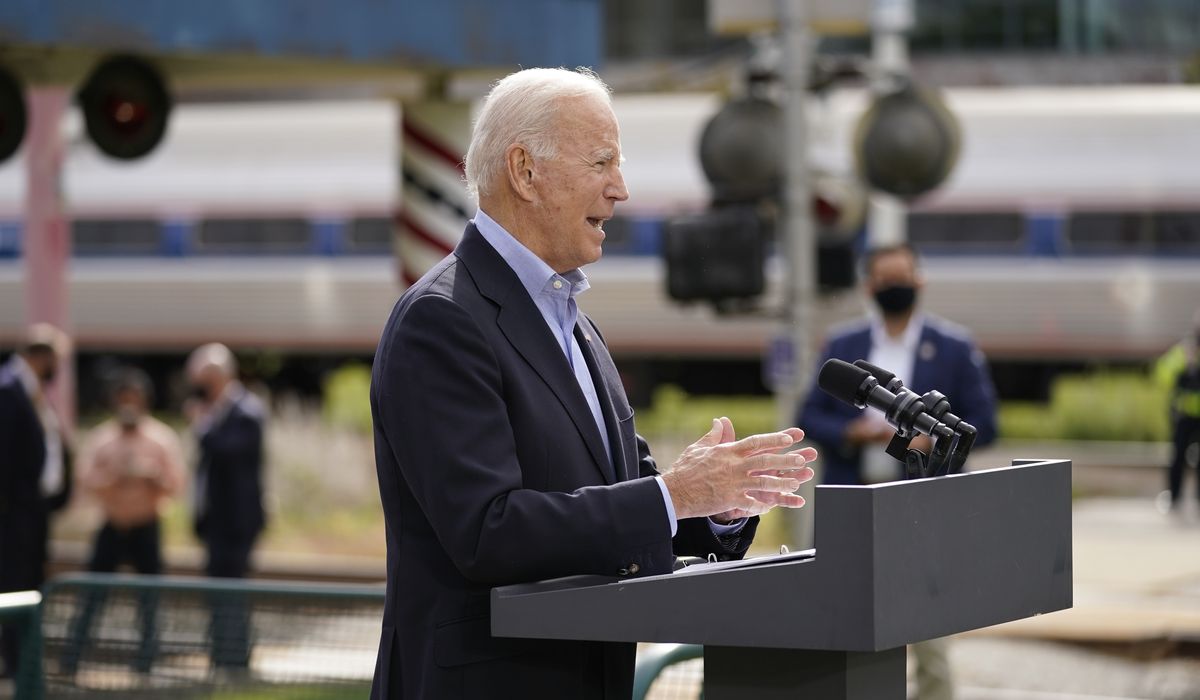 Joseph R. Biden leaned into his recent populist messaging Wednesday as he kicked off a train tour of eastern Ohio and western Pennsylvania, saying President Trump looks down on Americans who might be struggling.

“I think it’s more than ignoring us,” Mr. Biden said in Cleveland. “I look at things from [a] Scranton perspective — he looks at it from Park Avenue. I think he basically looks down on us.”

Mr. Biden spoke the day after his first debate with Mr. Trump that was dominated by name-calling and interruptions.

“The question is does he see you where you are and where you want to be? Does he care? Has he tried to walk in your shoes to understand what’s going on in your life?” Mr. Biden said. “Or does he just ignore you and all the folks all over America who are in a similar situation?”

Mr. Trump said Wednesday that Mr. Biden flopped the previous night and that the former vice president’s performance probably cost him support from the far left.

“Second Amendment is DEAD if Biden gets in! Is that what you want from a leader? He will destroy our Country! VOTE NOW USA,” the president said on Twitter. 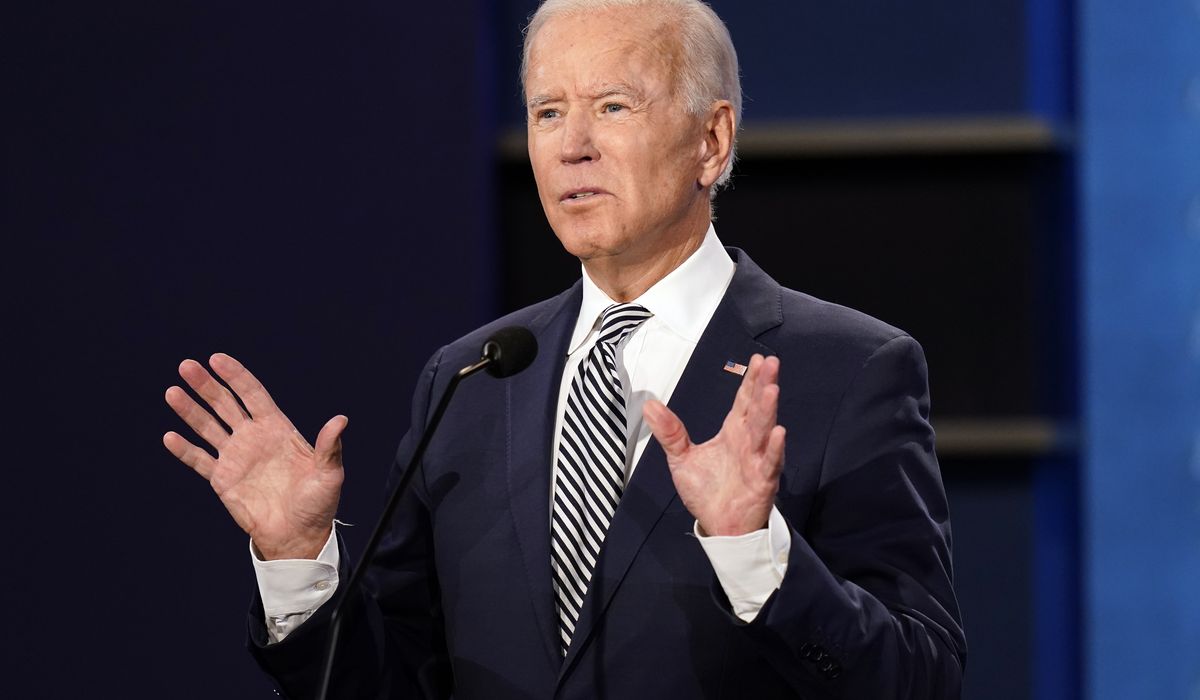 The Green New Deal was back on the front burner Tuesday after Democratic presidential nominee Joseph R. Biden said that he doesn’t support the ambitious climate plan, immediately both before and after defending it.

During the presidential debate, Mr. Biden said, “The Green New Deal is not my plan.”

But a moment later, he said: “The Green New Deal will pay for itself as we move forward. You’re not going to build plants that in fact are great polluting plants.”

President Trump jumped in with, “Oh, you don’t? Well, that’s a big statement,” predicting that Mr. Biden had just lost “the radical left.”

Mr. Biden explained, “I support the Biden plan that I put forward, which is different than what [Mr. Trump] calls the radical Green New Deal.”

The exchange deflated environmentalists on social media who champion the Green New Deal, although Rep. Alexandria Ocasio-Cortez, the New York Democrat who sponsored the House resolution, insisted that, “This isn’t news.”

“Our differences are exactly why I joined Biden’s Climate Unity Task Force — so we could set aside our differences & figure out an aggressive climate plan to address the planetary crisis at our feet,” tweeted Ms. Ocasio-Cortez. “Trump doesn’t even believe climate change is real.”

This isn’t news, Kellyanne.Our differences are exactly why I joined Biden’s Climate Unity Task Force – so we could set aside our differences & figure out an aggressive climate plan to address the planetary crisis at our feet.Trump doesn’t even believe climate change is real. https://t.co/Bj8SMD9Syf
— Alexandria Ocasio-Cortez (@AOC) September 30, 2020

Mr. Biden’s running mate, Sen. Kamala Harris, is a cosponsor of the Green New Deal resolution in the Senate, the companion to the measure introduced by Ms. Ocasio-Cortez in the House.

Mr. Biden’s plan calls for limiting but not abolishing hydraulic fracturing; replacing fossil fuels on the electrical grid by 2035, and achieving net-zero emissions by 2050.