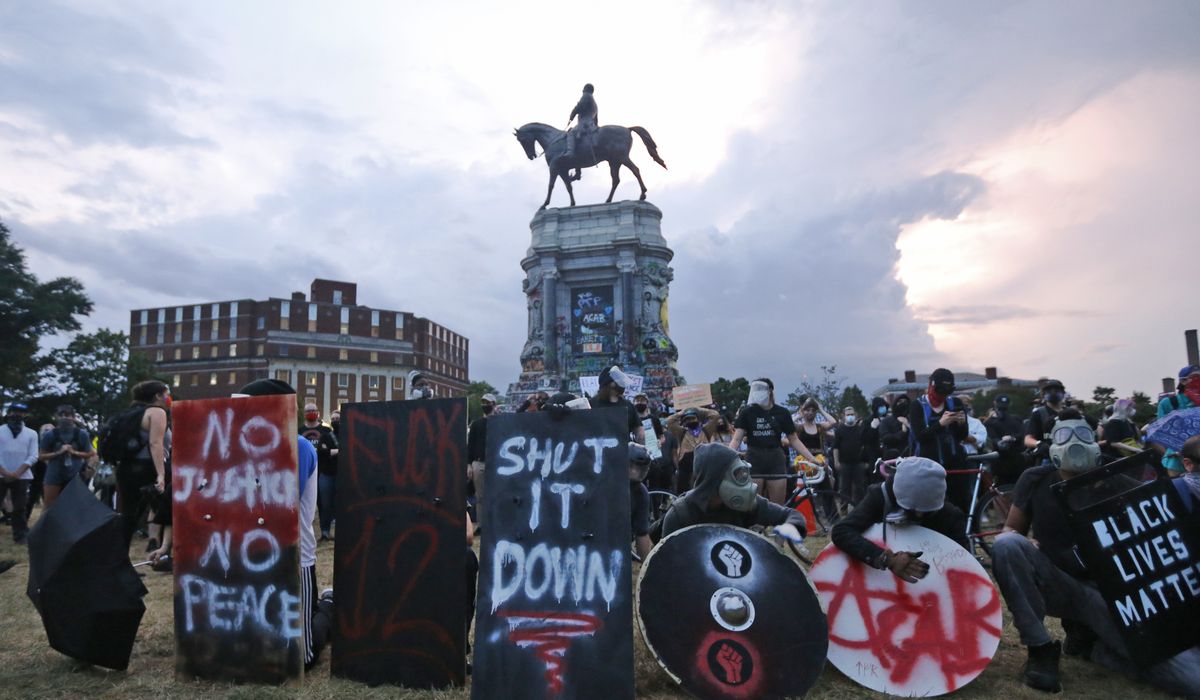 Former Vice President Joseph R. Biden faced reporters Tuesday for the first time in three months, and he gave vandals a pass for tearing down Confederate statues around the country, saying he draws a “distinction” between defacing Civil War monuments and damaging other memorials.

The 77-year-old presumptive Democratic presidential nominee also said he is “constantly tested” for cognitive decline and is eager to match wits with President Trump in three fall debates.

On the destruction of historic monuments around the nation during protests over racial injustice, Mr. Biden said local officials, not criminals, bear the blame when vandals pull down statues of Confederate figures. He said elected officials “have a responsibility” to relocate racially charged memorials to museums.

“I can understand the anger and anguish that people feel by having, for years and years, been under the statue of Robert E. Lee, if you’re an African American,” Mr. Biden said, adding that he believes such an act is “fundamentally different” from pulling down a monument to Thomas Jefferson or Abraham Lincoln.

Calling the destruction a phase of “responding to systemic racism in America,” Mr. Biden said “don’t be surprised if someone pulls down the statue of Jefferson Davis,” the president of the Confederacy.

Mr. Trump has made his opposition to vandalism of all monuments a high-profile feature of his law-and-order campaign theme. He has accused Mr. Biden of refusing to speak out against criminals who have defaced or destroyed a variety of statues, including representations of Christopher Columbus and George Washington. He said Mr. Biden doesn’t want to offend extremists in his party.

The president signed an executive order last week calling for the prosecution such vandals to the fullest extent of the law, including prison terms of up to 10 years.

“This is a battle to save the Heritage, History, and Greatness of our Country!” the president tweeted Tuesday.

The Democrat agreed with Mr. Trump that the government is obligated to protect monuments such as the Jefferson and Lincoln memorials on the National Mall.

“That’s a remembrance,” he said. “It’s different from revering somebody who had that [Confederate] view.”

Noting that Washington and Jefferson owned slaves, Mr. Biden said there was a difference between the Founding Fathers and Confederates who seceded from the United States.

“The idea of comparing whether or not George Washington owned slaves or Thomas Jefferson owned slaves and somebody who was in rebellion, committing treason, trying to take down a union to keep slavery — I think there’s a distinction there,” he said.

Mr. Biden hadn’t taken questions from journalists since April 2. He has mostly been hunkering in his Delaware home but nevertheless climbed to a double-digit lead over the president in national polls. A USA Today/Suffolk poll on Tuesday showed Mr. Biden increasing his lead by 3 percentage points since the spring, holding a 53% to 41% advantage over the president.

Trump campaign officials have been hoping to draw out Mr. Biden into exchanges with journalists. They believe his liberal policies and his age will enable the news media to better define the Democrat for voters.

The questions Mr. Biden fielded Tuesday were anything but hostile or accusatory. Using a tactic that President Obama often deployed, Mr. Biden called on reporters from a list he brought with him.

“The press ended up really giving him softball questions,” Trump campaign senior adviser Mercedes Schlapp said on Fox News. “Goodness gracious, I would love for our White House press secretary to have questions like that asked of her. But that’s never the case. It’s a double standard for some of these liberal media outlets.”

Mr. Biden, whom the president ridicules as “Sleepy Joe,” also used the controversy over reported Russian bounties for killing U.S. soldiers in Afghanistan to take a swipe at the president’s mental abilities.

“He talks about cognitive capability,” Mr. Biden said. “He doesn’t seem to be cognitively aware of what’s going on. He either reads and/or gets briefed on important issues — and then forgets it — or he doesn’t think it’s necessary that he need to know it.”

The purpose of Mr. Biden’s event was to attack Mr. Trump’s response to COVID-19. He said the president has “waved the white flag” in the face of the surging pandemic.

“America knows this crisis isn’t behind us,” Mr. Biden said. “We don’t need a cheerleader, Mr. President. We need a president.”

The presumptive Democratic nominee chided Mr. Trump for calling himself a “wartime president” battling the outbreak, which has killed more than 127,000 Americans as hospitalization rates rise in a dozen states.

“What happened? Now, it’s almost July, and it seems like our wartime president has surrendered, waved the white flag, and left the battlefield,” Mr. Biden said.

He held up a face mask at one point and urged Americans to wear them.

“Wear a mask. It’s not just about you,” Mr. Biden said. “It’s about your neighbors, it’s about your colleagues, it’s about keeping other people safe. … It may be inconvenient, it may be uncomfortable, but it’s the right thing to do as an American.”

“Since the beginning, he has done nothing but lob partisan grenades from his basement in Delaware while facing very little scrutiny for his own record,” Mr. Murtaugh told reporters. “The only thing that Joe Biden knows about handling a public health crisis is that he can’t.”

He was referring to the Obama administration’s oft-criticized response to the swine flu outbreak.

“It used to be that Americans would come together to face a crisis,” Mr. Murtaugh said. “But Biden has spent all of his energy using it as a political weapon in a cynical attempt to undermine confidence in the federal response.”

Trump campaign officials noted that the president stopped travel from China in late January, a move that Mr. Biden initially called xenophobic. Mr. Murtaugh said the president made the U.S. the “world’s leader” in coronavirus testing, ramped up production of ventilators, deployed two hospital ships, and has been holding China and the World Health Organization accountable.

“This is something that Joe Biden would not do and would never do,” he said.

Mr. Biden said he has not been tested for COVID-19 but will likely get a test soon as he goes out in public more often.

“I have not had symptoms,” he said.

Mr. Trump held a “comeback” rally more than a week ago in Tulsa, Oklahoma, although it wasn’t well-attended. Mr. Biden said that was because of fears of the coronavirus. The Democrat has no plans to hold campaign rallies.

“This is the most unusual campaign in modern history,” he said. “I’m going to follow the doc’s orders. That means I am not going to be holding rallies. You know me. I’d much rather be out there with people. That’s where I get the greatest feel.”

But he said “the irony is we’ve probably reached more people directly [online].”

“They tell me 200 million people have watched what I’ve done from home,” Mr. Biden said. “But I’d much rather be doing it in person.”

Asked about his significant lead in national polls, Mr. Biden replied, “I don’t want to jinx myself. I know the polling data is very good, but I think it’s really early.”