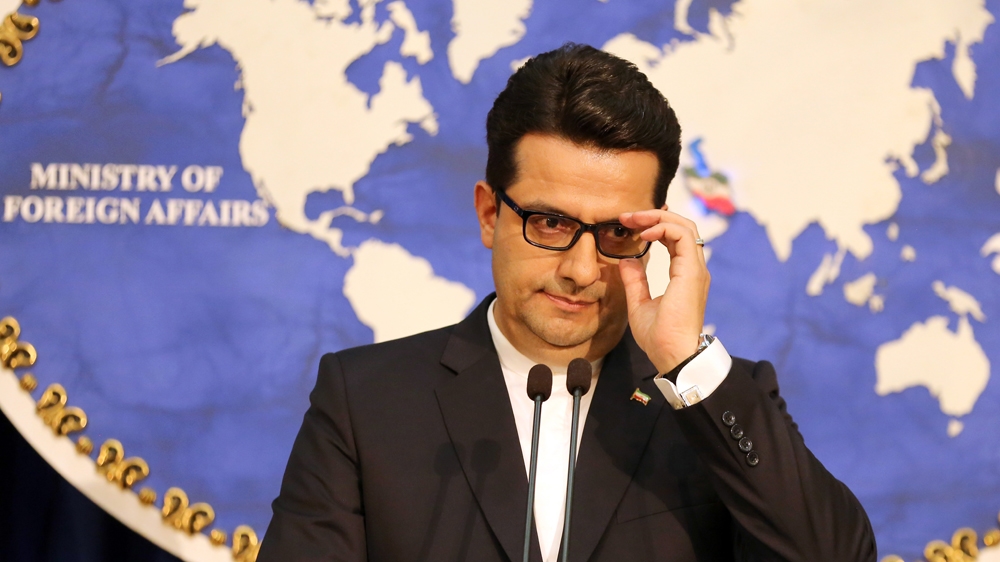 The Iranian foreign ministry has called on the United States to “stop violence” against its own people in the face of large protests sweeping the nation following the police killing in Minneapolis of another black man.
“To the American people: the world has heard your outcry over the state of oppression. The world is standing with you,” foreign ministry spokesman Abbas Mousavi said at a news conference in Tehran on Monday.
More:

Iran’s protests: All you need to know in 600 words

“And to the American officials and police: stop violence against your people and let them breathe,” he told reporters in English.
Tens of thousands of people have taken to the streets across the US in recent days to protest against police brutality and demand tougher, first-degree murder charges and more arrests over the death of George Floyd in police custody on May 25.
Floyd died after a white police officer, Derek Chauvin, pressed his knee on the handcuffed black man’s neck for nearly nine minutes, until he stopped breathing.
Chauvin has been fired and was charged with third-degree murder on May 29.
“We deeply regret to see the American people, who peacefully seek respect and no more violence, being suppressed indiscriminately and met with utmost violence,” Mousavi told reporters in English.
He also accused the US, a longtime foe of Iran, of “practising violence and bullying at home and abroad”.
The sometimes violent protests in the US have received widespread coverage in Iranian media, especially on state television, which recently aired a programme accusing the US of institutional racism.
Hundreds killed in Iran protests
Tensions between the two countries have been rising since 2018, when US President Donald Trump withdrew his country from a landmark nuclear accord and reimposed crippling sanctions on Iran’s battered economy under Washington’s campaign of “maximum pressure”.

Iranian Foreign Minister Mohammad Javad Zarif on Monday said on Twitter that “the ‘knee-on-neck’ technique is nothing new: Same cabal … have been employing it on 80M Iranians for 2 yrs, calling it ‘maximum pressure’.”
“It hasn’t brought us to our knees. Nor will it abase African-Americans,” he said.
Iran was condemned by the US after deadly street violence that broke out in Iran in November during protests triggered by a surprise petrol price hike.
A senior Iranian legislator said on Monday that 230 people were killed and thousands injured in the November protests, according to state media. It was the first time an official in Iran gave overall casualty figures for the unrest.
London-based human rights group Amnesty International has said 304 people were killed in that crackdown, including 12 children, while the US said more than 1,000 people may have been killed.
Iranian officials have repeatedly denied death tolls given by foreign media and human rights groups as “lies”.
Continue Reading…