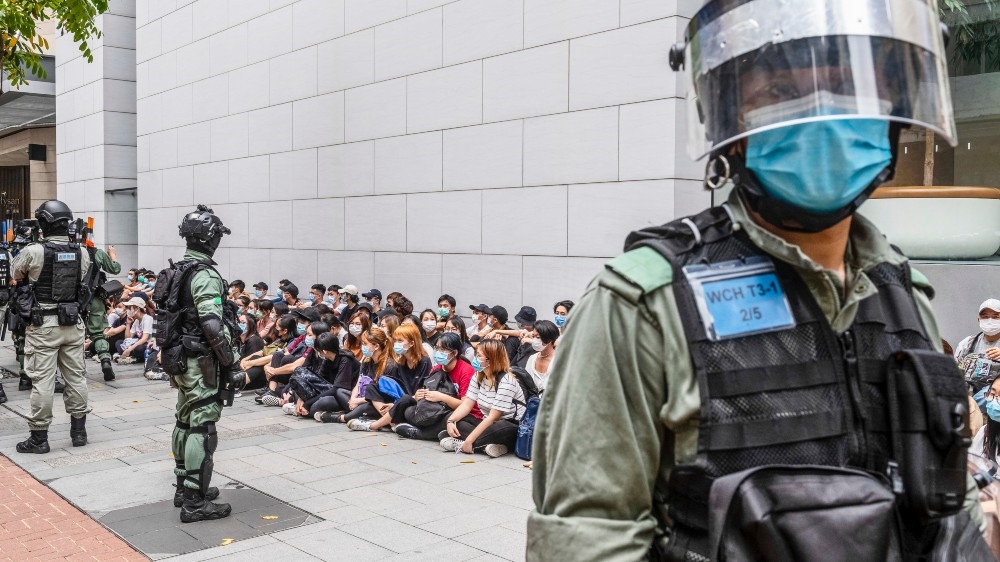 China’s National People’s Congress (NPC) is expected to give the nod on Thursday to impose a National Security Law on Hong Kong in a move critics say will fundamentally undermine the freedoms that were enshrined in the territory’s laws when it was returned to Chinese rule in 1997.
News of the plan has already given renewed momentum to Hong Kong’s pro-democracy protests, and fuelled condemnation from governments around the world.
More:

US President Donald Trump has hinted the law could mean the end of Hong Kong’s special trading status with the United States with a decision to be announced by the end of the week. Secretary of State Mike Pompeo on Wednesday notified Congress that the administration no longer believes Hong Kong is autonomous from mainland China.
“The new national security law will deal the most severe blow to the rights of people in Hong Kong since the territory’s transfer to China in 1997,” Human Rights Watch China director Sophie Richardson said in a statement.
“Hong Kong people will now have to consider arrests and harsh sentences for protesting, speaking out, running for office, and other freedoms they have long enjoyed and struggled peacefully to defend.”
How is Hong Kong governed?
The British took control of Hong Kong in 1842 at the end of the first Opium War, and secured a 99-year lease for the island and its surrounding territories in 1898.
It was then Prime Minister Margaret Thatcher who signed the agreement to return Hong Kong in 1984, with future governance to be based on the framework of ‘one country, two systems’.
At the time, the territory was a vital economic centre to a vastly poorer China, and the mini-constitution that was agreed – known as the Basic Law – afforded Hong Kong considerable autonomy, and its people rights and freedoms unknown on the mainland. It is supposed to remain in force until 2047.

Article 27, for instance, provides for freedom of speech, the press and demonstration. The International Covenant on Civil and Political Rights is also written into the Basic Law.
Article 45 says the “ultimate aim” in selecting chief executive should be universal suffrage. Article 68 says the same for the Legislative Council (Legco), Hong Kong’s 70-member parliament.
Both continue to be elected under rules that help ensure the domination of pro-Beijing voices. In Legco, only half the seats are chosen by direct election, while the chief executive is appointed by a small committee with Beijing having final approval.
The Basic Law also says the Hong Kong government is supposed to enact “on its own” legislation to replace colonial-era laws that prohibit acts such as treason, secession or subversion – in other words national security laws.
The administration of the first chief executive, former shipping tycoon Tung Chee-hwa, tried to do so in 2003, but abandoned the plan in the face of mass demonstrations. Tung resigned a few months later and none of his successors has appeared willing to take up the challenge.
The Basic Law does allow the government in Beijing to bring in laws but only under certain circumstances – on issues that relate to foreign affairs, defence and “other matters outside the limits of the autonomy of the Hong Kong SAR as specified” by the Basic Law.
What is China proposing with the National Security Law?
The legislation itself has yet to be drafted, but the draft decision that was shared by the NPC indicates the legislation will cover the following areas:
Acts of secession
Subverting state power
Organising and carrying out terrorist activities and other behaviour that endangers national security
Activities that interfere with the internal affairs of the Hong Kong Special Administrative Region (HKSAR) and involve foreign or external powers.
It also raises the spectre of mainland intelligence agencies, “relevant national security organs”, setting up shop in the territory, which the Hong Kong Bar Association has said is in contravention of the Basic Law.

‘This is the end of Hong Kong’: China to impose security law

Additional details leaked to local Hong Kong media on Wednesday suggested the law would apply not only to individuals but also to organisations, which could leave human rights and other groups that are critical of China at risk.
Why now?
Hong Kong has been roiled by almost a year of protests that began when the Hong Kong government tried to push through legislation that would have allowed suspects to be sent to the mainland for trial.
The extradition bill brought a million people onto the streets on June 9 and almost double that a week later. In between, the Legco chamber was vandalised as protesters broke through police barricades.
Even with the bill suspended, the demonstrations continued with increasing intensity over the summer as protesters and police clashed on the streets in clouds of tear gas and volleys of bricks, rubber bullets and petrol bombs that culminated in a violent siege of the Hong Kong Polytechnic University in November.
Thousands have been arrested, including a number of children and teenagers, and the protesters have accused the police of using excessive violence, a charge the force denies.
Hong Kong is also facing flashpoints over a number of other issues.
Riot police were deployed to thwart protests on Wednesday when the second reading of the controversial National Anthem bill, which would make it a criminal offence to “disrespect” China’s national anthem, was slated for its second reading in Legco. Some 200 people were arrested in what the police said was an “illegal assembly”.

Even before the extradition bill ignited people’s anger, tensions had long been simmering.
There was Occupy Hong Kong which brought the central business district to a standstill for weeks in 2014, the disappearance of a number of booksellers who published salacious works critical of Chinese President Xi Jinping and China’s disqualification of democratically-elected candidates to Legco after they deliberately misread their oaths.
Next week marks the anniversary of the 1989 Tiananmen Square massacre when people in Hong Kong usually hold a vigil to remember those who died in a crackdown China has all but erased, while elections for Legco are due in September. At district elections last November, democratic candidates won by a landslide.
What has been the response?
The announcement a week ago sparked immediate protests – with more overt calls for Hong Kong independence than ever before, but it also triggered a drop of more than 4.6 percent in share prices on the Hong Kong Stock Exchange.
China, and Hong Kong officials insist there is nothing to worry about.
Secretary for Security John Lee told Legco on Wednesday it was “crystal clear” the legislation was all about protecting the “overwhelming majority of the public who are law-abiding”.

However, opponents disagree. They look to China’s interpretation of its own national security laws on the mainland and worry that the Hong Kong version will expose critics to detention and arrest.
There are also concerns about the impact on Hong Kong’s much cherished judicial independence, which has helped underpin investment and business and made the city an international financial centre.
“It’s a blow to the autonomy Hong Kong is meant to enjoy,” Ben Bland, a research fellow at Australia’s Lowy Institute and author of Generation HK: Seeking Identity in China’s Shadow. “It’s a sign of times to come that Beijing is going to be playing a much more direct role in managing the city.”
The US has been the most vociferous critic of the proposed legislation, with Pompeo’s declaration on the eve of the NPC’s vote on the legislation that Hong Kong was ‘no longer autonomous’ from China.
The last colonial governor, Chris Patten, is also among 233 parliamentarians from 26 countries who have signed an open letter condemning the Chinese move.
“This is a comprehensive assault on the city’s autonomy, rule of law, and fundamental freedoms,” it said. “The integrity of ‘one country, two systems’ hangs by a thread. It is the genuine grievances of ordinary Hong Kongers that are driving protests. Draconian laws will only escalate the situation further, jeopardising Hong Kong’s future as an open Chinese international city.”

Joshua Wong: ‘This fight is not just about Hong Kong’

Johannes Chan,  a constitutional expert and professor of law at Hong Kong University, says Hong Kong is now in a “pretty bad situation”.
“China’s idea of ‘one country, two systems’ is one country, two economic systems and don’t bother about civil society or democracy,” he told Al Jazeera.
What happens next?
Once the law is passed at the NPC, the Standing Committee of the National People’s Congress (NPCSC) will start drafting the text.
It will then be added to Annex III of the Basic Law, bypassing the Legco and any public consultation and becoming law by the chief executive issuing a legal notice in the Government Gazette. The whole process could be completed in less than three months.
Chan says Hong Kong courts would have no jurisdiction to challenge the legislation.
Opponents of the legislation say international pressure and the threat of sanctions targeted at key officials are perhaps the only option. Trump has promised action by the end of this week, but has not elaborated on the kind of action.
In the meantime, protests are expected to continue.
“Still people are coming to the streets,” said Patrick Poon, an independent human rights researcher based in Hong Kong. “I don’t think they will stop because public anger is so high. People have been pushed to extremes.”
Continue Reading…

George Floyd death: Pressure mounts for US officers to be charged |NationalTribune.com