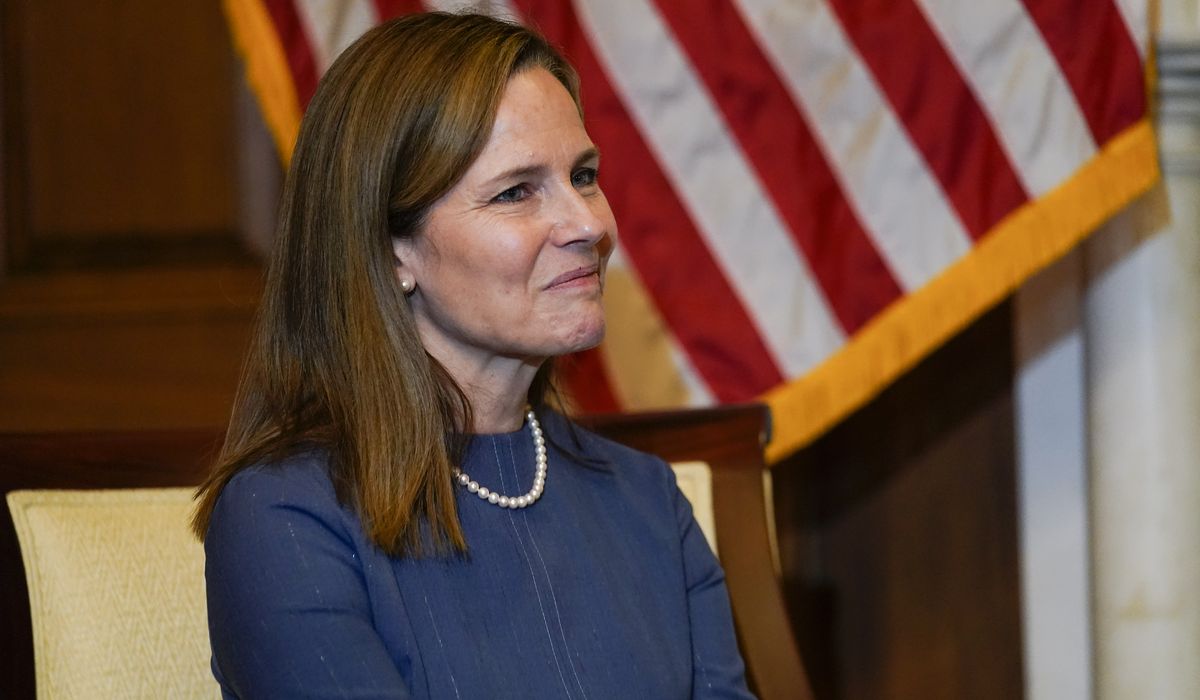 A working mother of seven school-age children who rose to the top of the legal ladder, Judge Barrett balanced life as a classroom mother while handing down rulings as a federal circuit court judge.

“As a nominee for our nation’s highest court, Judge Barrett is an example to girls and young women in Iowa, and across America, that they truly can do it all,” said Sen. Joni Ernst of Iowa, one of the first female Republicans to serve on the Senate Judiciary Committee.

Judge Barrett visited Capitol Hill for senators to get to know her, both personally and professionally. She is scheduled to spend the next few days meeting with senators who are willing to take time to get to know President Trump’s third nominee to the high court.

“Judge Barrett is brilliant,” Senate Majority Leader Mitch McConnell, Kentucky Republican, said after he met with the president’s nominee. “This nominee could not be more fully qualified to serve on the Supreme Court.”

If confirmed, Judge Barrett will be the fifth woman to sit on the court but the first to do so while having school-age children.

A devout Catholic, Judge Barrett also provides Christian conservative women one of their own as a new feminist leader for young women.

“For decades now — it’s been 40 years — we have heard the discussion as having role models for women on the Supreme Court. We are so eager to now have a role model for our daughters — a woman who is a constitutionalist and a conservative,” said Penny Nance, president of Concerned Women for America.

“She is a new role model for women instead of the one size fits all.”

Her opponents see that as a negative.

“A far-right majority on the court could turn back the clock,” Mr. Schumer said.

Mr. McConnell mocked that claim from the chamber floor.

“This 48-year-old working mother is going to turn back the clock on women’s rights, so says the Democratic leader,” Mr. McConnell said.

Senate Republicans say they have the votes to move forward with Judge Barrett’s nomination. They plan to hold hearings the week of Oct. 12 and a confirmation vote in the full chamber before the end of October — just days before the Nov. 3 elections.

Several Democrats said they won’t meet with Judge Barrett. They say the president who wins the election should fill the seat left vacant by the death of Justice Ruth Bader Ginsburg, a liberal icon.

They also accused Republicans of rushing to confirm someone so the high court can strike down the Affordable Care Act, which comes before the court Nov. 10, and give Mr. Trump an edge if a contested presidential election ends up in the Supreme Court.

Sen. Elizabeth Warren, Massachusetts Democrat, closed her door to the judge. She said a face-to-face meeting would “lend legitimacy to Mitch McConnell’s efforts to steal another Supreme Court seat.”

“She’s an extremist who was picked to overturn Roe v. Wade, rubber-stamp Trump’s attacks on immigrants, strip away voting rights, and complete the decadeslong assault on our judiciary by billionaires and giant corporations to tilt the courts in their favor,” Ms. Warren said. “Too many lives are on the line. We need to treat this nomination like the illegitimate power grab it is.”

Despite the tough talk from Ms. Warren, Democrats are painfully aware of potential political blowback if they are seen as beating up on a sympathetic character such as Judge Barrett.

That makes it unlikely that voters will see a repeat of the type of ambush that met Justice Brett M. Kavanaugh at his confirmation hearings.

Marge Baker, executive vice president for the progressive People for the American Way, stressed that Democrats’ opposition to Judge Barrett isn’t personal, but instead a pushback on Mr. Trump’s reasons for appointing certain nominees to the federal bench.

“He made it clear that litmus tests for his judicial appointments, especially to the Supreme Court, are twofold: overturning Roe and overturning the ACA, so you put two and two together,” she said.

Democrats also demanded that Judge Barrett, if confirmed, recuse herself from any Supreme Court ruling on the presidential election.

Sen. Ted Cruz, Texas Republican, told reporters that the nominee must be confirmed before the election so she can weigh in on legal challenges if disputes arise in critical states.

“Joe Biden has already stated that if he doesn’t win he intends to contest the legitimacy of the election. If we see multiple cases of challenging the election, if the court were to have only eight justices. It could divide 4-4,” he said. “That would be an untenable situation.”