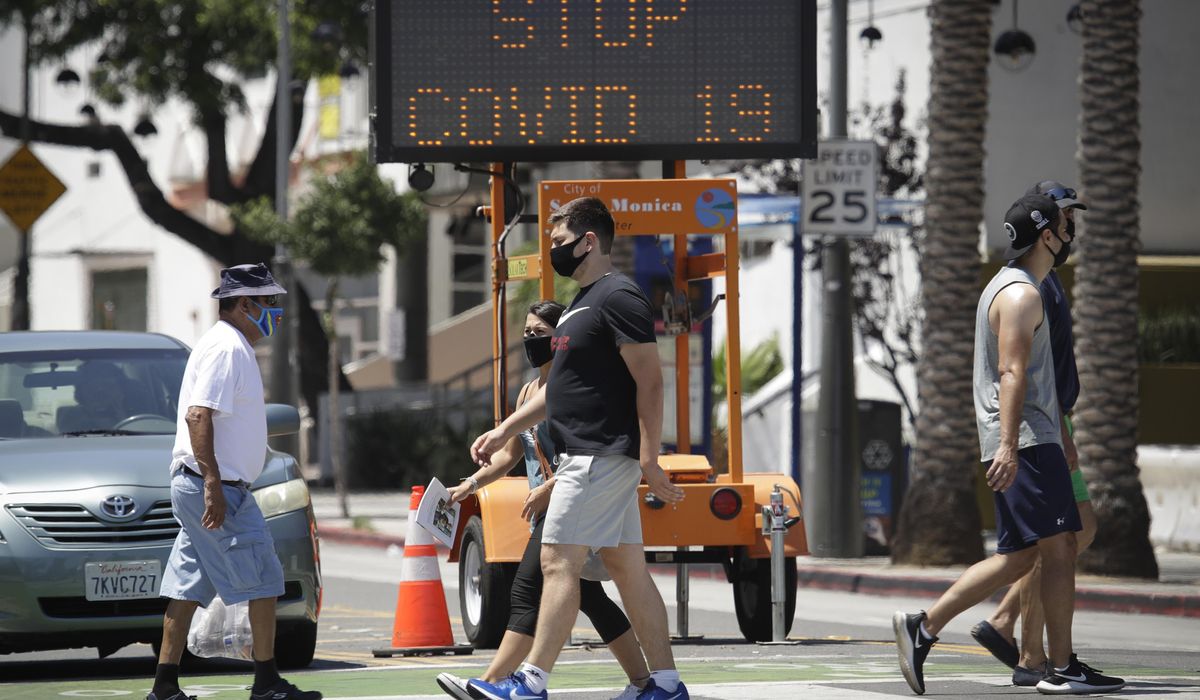 There’s something about the mask-wearing mandates sweeping Florida counties that rub Anthony Sabatini the wrong way.

The Republican state legislator has filed eight lawsuits against recently enacted orders, emphasizing that he has no problem with voluntary mask-wearing or government guidances, but he does have a problem with local officials telling constituents where and when to cover their mugs.

“To put it plainly, I just don’t think the government owns your face,” said Mr. Sabatini, who heads the Sabatini Law Firm in Clermont, Florida.

He may be just warming up. At least 20 states and dozens if not hundreds of localities have enacted mask requirements aimed at combating the novel coronavirus, backed by public health officials like Michigan chief medical executive Dr. Joneigh Khaldun, who said the coverings “can significantly decrease the chance of spreading COVID-19 and save lives.”

Those mandates are meeting with pushback on a host of fronts, including enforceability, constitutionality and the medical science behind the orders as state and local governments respond to the upswing in positive COVID-19 tests, an increase led by Sun Belt states.

The Centers for Disease Control and Prevention recommended early on against wearing masks and then urged people to wear them, but now U.S. public health officials are virtually unanimous in urging residents to wear masks in public and around people outside their households when social distancing is not possible.

“Cloth face coverings may help prevent the spread of #COVID19 when they are widely used in public settings,” tweeted CDC Director Robert R. Redfield. “When you wear a face covering, you help protect those around you. When others wear one, they help protect people around them, including you.”

His tweet prompted coronavirus contrarian Alex Berenson to tweet back, “They may. Then again, they may not. Who knows?”

For those such as Mr. Sabatini challenging the mask orders in court, however, the issue has less to do with the medical recommendations than with government overreach.

In Martin County, Florida, about 100 demonstrators turned out Saturday to protest the newly passed mask mandate, which requires residents to wear facial coverings when indoors at businesses, government buildings and other public spaces, as well as outdoors when social distancing is not possible, until Aug. 8.

Mr. Sabatini, who filed a lawsuit Sunday against the order, called the measure “out of control” and beyond the scope of county officials. Violators may be charged with misdemeanors and fined $50 to $250.

“They define a business establishment as pretty much everything, indoor or outdoor, where any good or service [transaction] occurs, and it’s all the time,” Mr. Sabatini said. “Long story short, you’re forced to wear masks literally all day, every day, everywhere they go. It’s overkill, and it’s not the role of government.”

Then there’s the matter of compliance. When Ohio Gov. Mike DeWine, a Republican, imposed mandatory face-coverings last week for residents in the state’s seven hardest-hit counties, several sheriffs said the order was virtually impossible to enforce — or simply refused to do so.

“I’m not going to be the mask police,” Butler County Sheriff Richard K. Jones told CNN. “I’m telling people, ‘Don’t call 911.’ All the police have been decimated as far as being laid off, having their budget cuts, the hospitals are less staffed. … I am not going to enforce the mask-wearing.”

He said he wears a mask “all the time” but that public anger against police had already prompted officers to stop issuing citations for minor infractions.

“We tell people, if you want to call the governor’s office, or call the health department, they can put a little yellow light on their car, and they can stop people,” said Sheriff Jones.

Michigan Gov. Gretchen Whitmer, a Democrat, drew the ire of the restaurant industry when she issued an executive order Friday by declaring, “For the sake of your loved ones, let’s all mask up, Michigan.”

“Masks can reduce the chance of spreading COVID-19 by about 70 percent,” she said in a statement. “By wearing masks, we can save lives and protect our family, friends, and neighbors from the spread of COVID-19. And by wearing masks now, we can put our state in a stronger position so our kids can return to school safely in the fall.”

She put the onus on stores to enforce the mask order, which the Michigan Retailers Association said placed employees at risk.

“While retailers and retail employees appreciate Gov. Whitmer’s efforts to increase the number of residents wearing masks when in enclosed, public spaces, we are frustrated that she did not leave the policing to law enforcement officers,” the association said. “This puts retail employees in potentially dangerous situations when they’re forced to confront unmasked customers.”

While Mr. DeWine is a Republican, most of the statewide mask orders have been imposed by Democratic governors, lending a partisan cast to the debate.

In the four states with the biggest increases in COVID-19 cases — Florida, Texas, California and Arizona — only California has issued a statewide mask mandate.

Florida Gov. Ron DeSantis has so far resisted calls to impose a statewide mask order, as have fellow Republicans Gov. Greg Abbott of Texas and Gov. Doug Ducey of Arizona, although they have enacted other public health restrictions and encouraged residents to wear facial coverings.

A Gallup poll released Monday found Democrats much more likely to support mask-wearing than Republicans. About 61% of Democrats responding said they always wear a mask outside the home, while only 24% of Republicans did so.

Some residents have chafed at the arbitrary nature of some mask orders. In Colorado, when the Tri-County Health Department decided last week to implement a mask order in suburban Denver, Douglas County pulled out of the department, calling it the last straw.

Douglas County Commissioner Abe Laydon said that unlike Arapahoe and Adams counties, the other two counties in the compact, his jurisdiction has a phenomenal 75% compliance rate, making such orders unnecessarily heavy-handed.

Mr. Laydon said he wears a mask, as do his family members, “but I think there’s a big difference between a science-based recommendation, a strong recommendation, and threatening jail time or fines if you don’t follow our orders.”

“It’s the enforcement piece,” said Mr. Laydon. “We don’t want our citizens to feel like they’re going to be fined or criminalized because they don’t wear a mask. The other issue is using a sledgehammer to slice bread.”

Colorado Gov. Jared Polis, a Democrat, is among the few blue-state governors to issue a statewide mask order, although he has urged residents to comply voluntarily, declaring Thursday, “Wear a damn mask!”