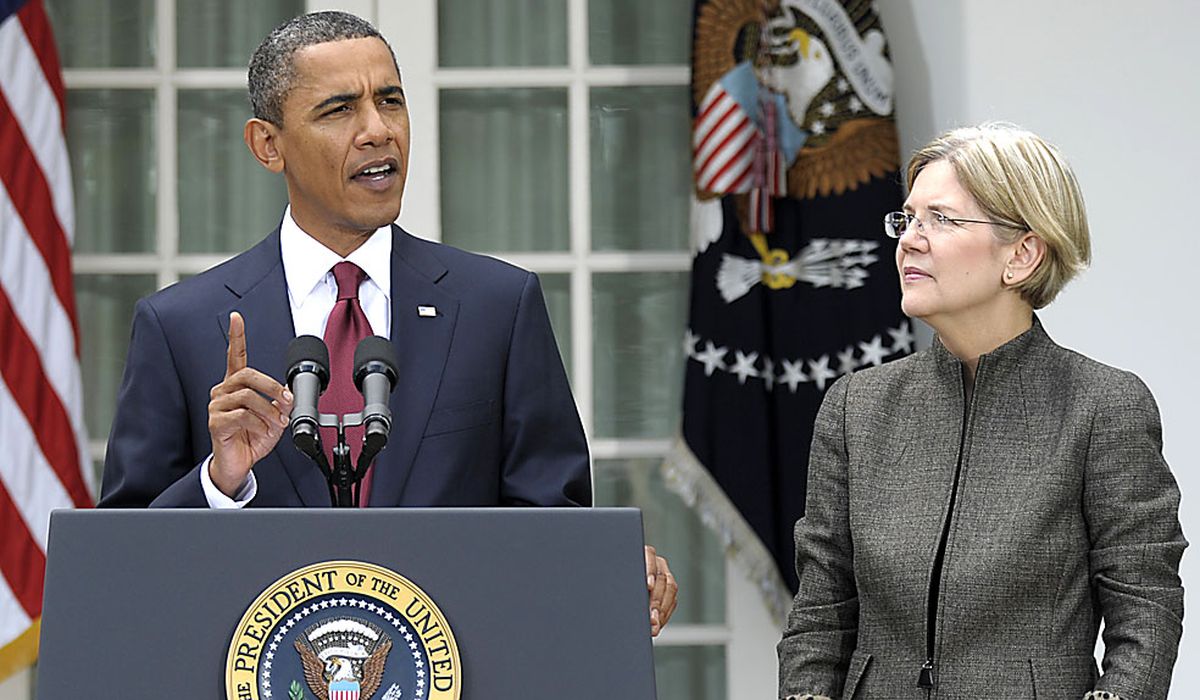 The Consumer Financial Protection Bureau — the Wall Street cop agency devised by Elizabeth Warren and launched under President Obama — puts too much power in a single director, making it unconstitutional, the Supreme Court ruled Monday.

But the justices left the agency intact, saying it could be fixed by allowing the president the power to fire the director.

Chief Justice John G. Roberts Jr., writing the key opinion in the 5-4 ruling, said Congress went too far when it created the CFPB with a single director, appointed for a five-year term, who controls an independent budget and cannot be fired by the president without good cause.

“The Constitution requires that such officials remain dependent on the president, who in turn is accountable to the people,” the chief justice wrote.

But rather than strike down the entire agency, he said the problems could be fixed by treating the CFPB director like any other officer who is removable at the president’s whim.

“If the director were removable at will by the president, the constitutional violation would disappear,” the chief justice wrote.

Congress foresaw this exact situation and wrote a “severability” clause into the law, allowing the courts to jettison any unconstitutional provisions.

The decision is a black eye for Ms. Warren, a law professor at the time, who pushed the idea of an independent watchdog over Wall Street in the wake of the 2008 financial collapse and ensuing Great Recession.

She had wanted an agency that would be immune to political pressure, with a director who cannot easily be fired by the president and a budget set by the director independently from Congress.

In 2010, a Democrat-controlled Congress joined with Mr. Obama to include that as the centerpiece of the Dodd-Frank Wall Street Reform and Consumer Protection Act.

Opponents had warned that the idea was likely unconstitutional.

The high court agreed, saying the president’s power to oust officers is inherent in the constitutional structure. There are some exceptions the court has allowed over the years, but never with so much independence as the CFPB, with a single director and control of its own budget, the majority said.

Indeed, that was exactly the situation President Trump found himself in when he took office, saddled with Richard Cordray as CFPB director. He is a disciple of Ms. Warren, was appointed by Mr. Obama, and was according to the law immune from Mr. Trump’s influence.

He created even more controversy when he left in late 2017, and tried to elevate his own pick to replace him, attempting to deny Mr. Trump even that opportunity to exert his executive appointment powers. The courts sided with Mr. Trump on that question.

Mr. Trump would first install his own budget director as acting CFPB director, then later substitute another pick of his choosing, giving him better control of the agency.

Dissenting Monday were the high court’s four Democrat-appointed justices, led by Justice Elena Kagan, who accused the majority of “gerrymandered” reasoning, picking and choosing from court precedent and history to create a way to eviscerate the CFPB.

She pointed out that the court has repeatedly allowed similar powers of independence for agencies headed by a board or commission, made up of multiple people. And she questioned why a single director would be any different.

She wrote that the Constitution never specifically gives the president removal powers, and the issue was heatedly debated in President Washington’s early years.

“In second-guessing the political branches, the majority second-guesses as well the wisdom of the Framers and the judgment of history,” she wrote. “It writes in rules to the Constitution that the drafters knew well enough not to put there. It repudiates the lessons of American experience, from the 18th century to the present day. And it commits the nation to a static version of governance, incapable of responding to new conditions and challenges.”

On the other side was Justice Clarence Thomas, who sided with the majority in saying the CFPB director was unconstitutional, but said he would have ruled the entire agency out of bounds. He said the courts are no place to rewrite the law.

But he went further, saying the cases Justice Kagan cited that validated other independent agencies in the past are wrong. He complained there are “numerous, unaccountable independent agencies that currently exercise vast executive power outside the bounds of our constitutional structure.”

• Alex Swoyer contributed to this story.