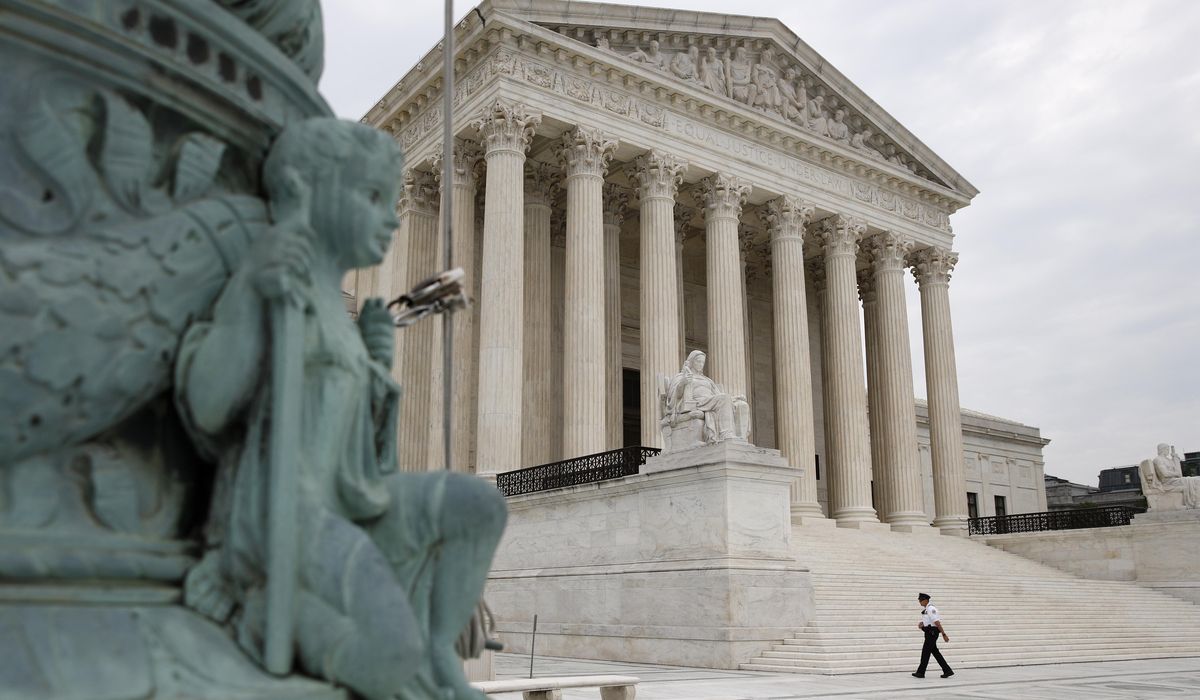 The Supreme Court struck a blow to a Democrat-aligned effort to chip away at the Electoral College to help oust Donald Trump as president, ruling Monday that states can punish presidential electors who go rogue and do not vote for the candidate who won their state.

The unanimous decision was a major loss for so-called “faithless electors,” who had insisted they had the right to cast ballots for whomever they thought best for the job, regardless of how their state voted.

The justices put their foot down, upholding the authority of states to slap fines and other penalties on electors who snub the voters.

“The State instructs its electors that they have no ground for reversing the vote of millions of its citizens. That direction accords with the Constitution — as well as with the trust of a Nation that here, We the People rule,” Justice Elena Kagan, an Obama-appointee, wrote for the court’s unanimous opinion.

The ruling settled cases out of Colorado and Washington, both of which have laws that punish electors who refuse to follow the will of voters, which the states made a condition of appointment to the Electoral College in the first place.

Defenders of the Electoral College argue that it empowers states and ensures regional issues matter in campaigns. Critics say it’s outlived its usefulness and now sends presidents to the White House who do not win the most votes nationwide.

That has happened five times, including twice this century, both of thgose times delivering a Republican to the Oval Office — in 2000, when George W. Bush defeated Al Gore despite Mr. Gore capturing about a half-million more votes; and in 2016, when President Trump won despite Hillary Clinton garnering 3 million more votes.

In that last election, seven electors refused to back the candidate who won their state. In Washington, won by Mrs. Clinton, three electors instead cast ballots for Colin Powell, a former Republican secretary of state.

They hoped it would persuade GOP electors in states Mr. Trump won to install a moderate Republican as president instead. Their plan failed and when they returned home, they were fined $1,000 each for not honoring their pledge.

The three Powell voters challenged Washington’s law as a violation of the First Amendment.

Following state law, Colorado removed Mr. Baca as a presidential elector and replaced him with someone who would vote for Mrs. Clinton.

Monday’s ruling upheld the fines against the Washington state electors and reversed the 10th Circuit’s ruling in Colorado, finding that constitutional rights aren’t violated when states penalize their faithless electors.

“The Constitution’s text and the Nation’s history both support allowing a State to enforce an elector’s pledge to support his party’s nominee — and the state voters’ choice — for President,” Justice Kagan said in the opinion.

The high court reasoned that states have broad authority over requirements for its presidential electors.

“It reflects a tradition more than two centuries old. In that practice, electors are not free agents; they are to vote for the candidate whom the State’s voters have chosen,” Justice Kagan wrote.

Justice Sonia Sotomayor recused herself in the Colorado dispute because she was friends with the challenger, making that case an 8-0 decision. She did, though, participate in the 9-0 Washington ruling, siding with the other eight justices to uphold penalties for rogue faithless electors.

In the 20th century, states moved to ban faithless voting and 32 states plus the District of Columbia have laws on the books requiring presidential electors to cast their votes for the candidate that won the popular vote in their state.

The high court upheld state laws that require electors to take a pledge not to go rogue in 1952, but Monday’s ruling took that ruling a step further, allowing states to legally sanction electors that break their pledges.

Fifteen states immediately remove faithless electors as a penalty, like Colorado, and others impose fines like Washington state does.

Lawrence Lessig, the attorney who represented the presidential electors, said the high court needed to hear the challenges to avoid a “constitutional crisis.”

“We have achieved that. Obviously, we don’t believe the court has interpreted the Constitution correctly. But we are happy that we have achieved our primary objective — this uncertainty has been removed. That is progress,” said Mr. Lessig.

Mr. Lessig’s organization, Equal Citizen, said in a press release it will continue efforts to reshape the Electoral College system through grassroots efforts after the November election to continue the discussion.

One possibility is endorsing the National Popular Vote Compact, which is an agreement among states to award their Electoral College votes to the candidate that wins the most votes nationally. Thus far, only 15 blue states and the District of Columbia — with a combined 196 electoral votes — have signed on, and the compact doesn’t take effect unless states with the needed 270-vote majority sign on.

But the ruling could potentially complicate the compact, which has been an effort to circumvent the Electoral College.

Colorado officials cheered the opinion, saying it avoided uncertainty and chaos ahead of November.

Colorado Secretary of State Jena Griswold called the ruling “a recommitment to our fundamental rights to vote and have our voices heard.” She also said it reconfirmed states’ rights.

Nonpartisan groups also welcomed the ruling, noting that if electors were free agents, special-interest money would try to sway them with amounts far greater than Washington’s $1,000 fines..

“If electors had been turned loose to violate state law and ignore their state’s voters, they would have been free to accept contributions from wealthy special interests who want to influence our politics, free from any public disclosure,” said Paul Smith, vice president of the Campaign Legal Center.