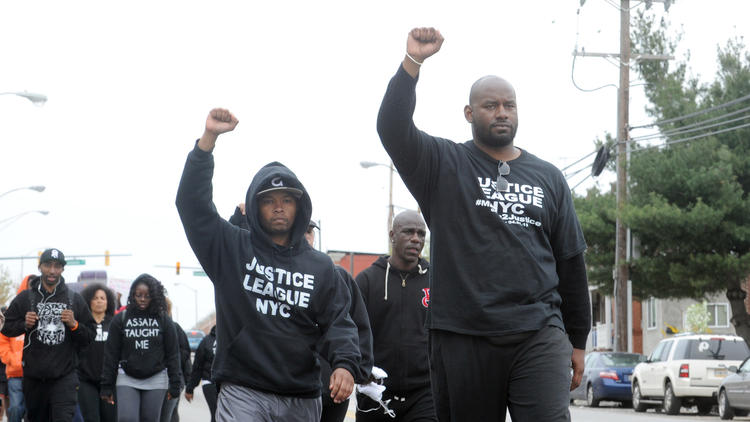 The family of a man who died after being arrested in Baltimore has called for the inquiry into his death to be taken away from city authorities, whose police officers they accuse of fatally injuring him.

Relatives of Freddie Gray told the Guardian on Sunday they want the US Department of Justice and FBI to take control of the investigation into how Gray’s neck was broken, apparently after he was detained by officers and loaded into a Baltimore police van.

“The officers who did this need to be arrested now, locked in jail and charged with murder,” said Gray’s sister, Carolina, in her first interview. “And this all needs to be investigated by separate police. How can Baltimore police look into their own?”

“The police are just going to look out for each other,” said Robert Darden, Gray’s uncle. “They need to get the federal government to investigate.” Protesters gathered on Sunday outside the police station in Baltimore where Gray was taken after his arrest.

Baltimore’s mayor, Stephanie Rawlings-Blake, told a press conference on Sunday a criminal investigation into Gray’s death had been opened by city authorities. “I will ensure we will hold the right people accountable,” she said. The four officers involved in Gray’s arrest have also been placed on administrative leave pending an internal inquiry into their use of force.

Gray’s death came less than three weeks after a white police officer in South Carolina was charged with murder for fatally shooting Walter Scott, 50, as he ran away from a confrontation over a traffic stop. Scott’s death was only the latest in a series of police killings of unarmed black men to have prompted protests since the death of Michael Brown in Ferguson, Missouri, last August.

Gray, 25, died on Sunday morning, a week after he was chased and arrested by officers on bicycles on Baltimore’s west side. Police have refused to disclose the alleged violation for which Gray, who was black, was stopped. His family said he was not charged with any crime. However a court filing from the day of his arrest, in which Gray’s name was spelled incorrectly, suggested he was charged with illegally carrying a knife.

Cellphone video recorded at the scene showed Gray shouting and moving his head as he was carried into a police van. Yet he was later found to have suffered three broken vertebrae. Gray lapsed into a coma and was brought back from the verge of death, before undergoing extensive surgery and eventually being declared dead on Sunday.

“While in police custody, his spine was 80% severed at his neck,” William Murphy Jr, an attorney for Gray’s family, said in a statement on Sunday. “We believe the police are keeping the circumstances of Freddie’s death a secret until they develop a version of events that will absolve them of all responsibility.” Relatives said Gray’s voice box was injured and he suffered swelling to his brain.

A timeline of the arrest released by the police last week shows a half-hour gap between police departing a spot near the scene of the arrest with Gray in a prisoner van at 8.54am on 12 April, and paramedics being called to the western district police headquarters just three blocks away at 9.24am. Gray’s family alleges he must have been badly beaten during this time.

“If someone has surrendered and you’ve put the handcuffs on him, what is the point of you beating them?,” said his sister, Carolina.

Jerry Rodriguez, Baltimore’s deputy police commissioner, told the press conference the reason for Gray’s arrest remained “a bit vague”. He confirmed at least some of the officers involved had not yet been interviewed. “The officers believe Mr Gray was immediately involved or recently involved in criminal activity and decided to make contact,” he said, adding that the area of the arrest was known for high rates of drug-related crime.

Police have said Gray tried to flee when he was confronted by officers. “We don’t have any idea why they were chasing him,” said Carolina Gray. Darden, their uncle, said: “The police have been killing these young people. When he saw the police, he ran. And when he ran and the police caught him, they were mad he ran from them. And they beat him up.”

Gray has been described as both 25 and 27 in news reports. His uncle said on Sunday he was 25. He said that in addition to Carolina, 27, Gray had a twin sister, Fredericka, who goes by the name Missy. According to public records, Fredericka is 25. An online obituary said that a brother of Gray, Raymond, died unexpectedly at the age of 31 in November 2013.

“Everybody loved him,” said Darden. “He had a lot of friends.” Carolina said her brother “would keep you laughing” and was friendly. “He liked to joke, he liked to play, he’d help anyone,” she said. “Anything he had, he was willing to give to anyone to help them.”

Darden said his nephew had been in trouble with the police in the past but could not provide specific details.

Murphy, a powerful figure in Baltimore legal circles who appeared as himself as the attorney for state senator Clay Davis in HBO’s The Wire, did not respond to a request for comment on Sunday. Carolina Gray declined to comment on whether the attorney had already asked the Department of Justice to open a federal inquiry. Police said the Gray family had declined to speak with senior officers.

The Baltimore fraternal order of police urged that there be “no rush to judgement” but welcomed the opening of the inquiry. “We take this incident very seriously and will work with all involved parties in order to assist wherever we are able,” the union said in a statement.

Further protests over Gray’s death were being scheduled for Monday morning. “Too many people are being killed by these police officers,” said Darden. “Something is wrong.” Carolina said: “They’re killing us black people. They should be here to protect us, but they’re not protecting us – they’re beating us.”