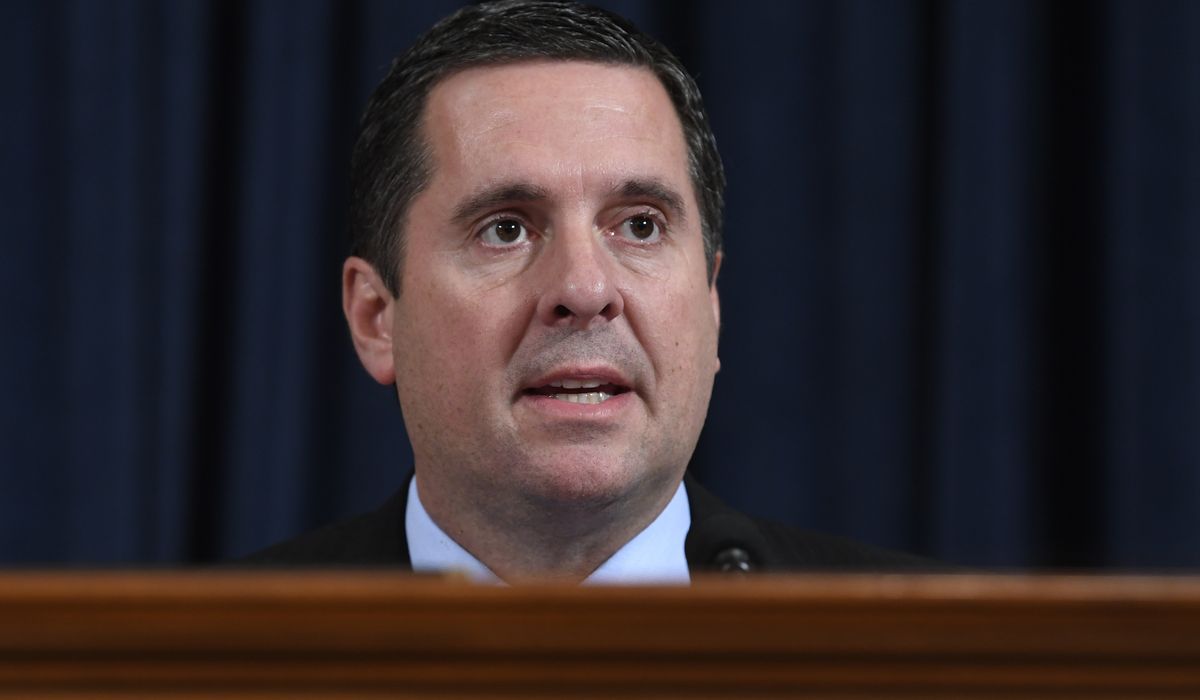 Mr. Rosenstein testified that the “scope” memo he sent to special counsel Robert Mueller was essentially written by the special counsel’s staff, not himself. It laid out broad authority to probe any Trump ties to Russia and mentions four aides, including campaign manager Paul Manafort and volunteer Carter Page.

Only the dossier, compiled by British ex-spy Christoper Steele and paid for by the Democratic National Committee and the Hillary Clinton presidential campaign, leveled allegations that those two Trump aides had conspired with the Kremlin.

“It’s essentially filled with the Steele dossier, the Clinton dirt, the Democratic National Committee dirt where they smeared it all over the Trump campaign, opened up an investigation that ultimately turned into the Mueller investigation,” Mr. Nunes, the top Republican on the House Permanent Select Committee on Intelligence, told One America News Network. “What on earth was Robert Mueller and Rod Rosenstein doing using the dossier after this investigation was ongoing?”

The timeline: Mr. Rosenstein appointed Mr. Mueller in May 2017. In August, he sent the scope memo that listed four Trump allies as targets in a Russian conspiracy.

Mr. Nunes said the Steele dossier by that time had been disproven. The FBI dropped its Russia probe into retired Army Lt. Gen. Michael Flynn in January 2017 for lack of evidence. Inside the FBI, the dossier was discredited by Mr. Steele’s main source, who told agents he just fed him Kremlin gossip.

The FBI also was told by intelligence agencies in early 2017 that some of the anti-Trump material was deliberate Kremlin disinformation. Another investigation target, George Papadopoulos, had told FBI undercover sources that he had no dealings with Russians.

Mr. Rosenstein portrayed himself Wednesday before the Senate Judiciary Committee as unaware of any of those developments when he took momentous steps to keep the probe going.

Mr. Rosenstein answered: “I agree with that general statement.”

Mr. Rosenstein became deputy director in April 2017, with direct authority over Crossfire Hurricane, as the FBI inquiry was code-named, and the Mr. Mueller team.

Mr. Rosenstein left the department after Mr. Mueller in March 2019 concluded there was no Trump-Russia election conspiracy.

“Rosenstein, at best, he is a very slippery figure,” Mr. Nunes said. “I’m perplexed by Rosenstein’s testimony of being unaware of all these things that occurred.”

Mr. Nunes said the Mueller prosecutors knew early on they had no Russia case and were instead focused on entrapping Mr. Trump in an obstruction of justice charge.