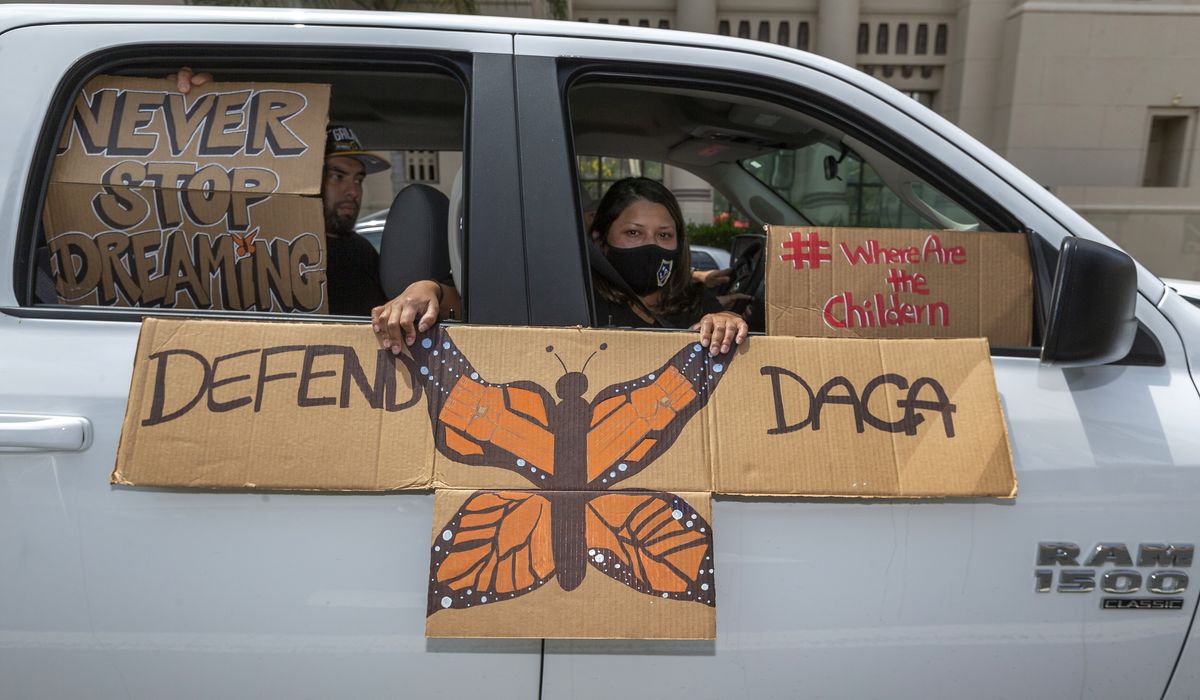 Some DACA recipients are high school valedictorians or serve as nurses on the front lines of the COVID-19 pandemic.

Others smuggle drugs or illegal immigrants, have been accused of murder or convicted of drunken driving.

The hundreds of thousands of illegal immigrant “Dreamers” protected by Thursday’s Supreme Court ruling are living the full range of the American experience.

“I’m not sure I’ve ever seen such a cohort of people about whom so much has been written and on whom so much praise has been bestowed, but so little is really known,” said Jessica Vaughan, policy studies director at the Center for Immigration Studies.

“Certainly, many are fine people, but many are not,” she said. “A few thousand are working in health care generally, but an even greater number have apparently been working in crime, including human smuggling and gangs. About 10% have a criminal history, which is probably more than the number who have graduate degrees.”

To immigrant rights activists and some congressional Democrats, they are trailblazers and “American in every way except on paper.”

To many of President Trump’s backers, they are more complicated, serving both as a sympathetic population but also a symbol of a broken immigration system.

Thanks to the high court’s ruling, they can continue to live in the legal limbo that is the Deferred Action for Childhood Arrivals, or DACA. That’s the program President Obama created in 2012 to grant them stays of deportation and work permits, entitling them to some taxpayer benefits.

In the years since, they have become a force in American politics, unable to vote themselves but wielding immense sway over Washington.

Dreamers took to social media to celebrate the Supreme Court ruling, though many of them acknowledged they were surprised the case turned out that way.

“We always knew this was close, and we were proven right with the 5-4 decision,” said Cesar Vargas, who was granted DACA status early in the program, attended law school and later became one of the first illegal immigrants to join the bar and practice law.

“We now have to focus on Congress so we can secure a permanent path to citizenship for Dreamers and for our 11 million undocumented family and neighbors,” Mr. Vargas said.

Over the years, Dreamers have become the gateway for the broader illegal immigration movement. It was Dreamers who, late in the Bush administration, began to “come out” as in the country illegally and challenged authorities to deport them. Instead, going public became a kind of surety against deportation.

According to the Center for American Progress, a liberal think tank that surveys DACA recipients each year, 85% say their earnings have improved, 60% say they bought their first car, and 6% started their own business after getting approval. Of those 25 and older, 1 in 5 have a professional license.

Some DACA recipients are huge achievers.

Those who graduated at the top of their high school class are regularly celebrated in the halls of Congress.

Jin Kyu Park, who was brought to the U.S. from South Korea when he was 7, made headlines when he became the first DACA recipient to win a Rhodes Scholarship to Oxford University.

But Ms. Vaughan, citing research by a Harvard University professor, said the number of DACA college graduates is about the same as the number who started college but didn’t finish. An equal number didn’t complete high school.

Economically, DACA recipients look much like other immigrants, she said — generally lower education than the population as a whole, which means lower earning potential. If they do earn citizenship, they will be more likely to use government assistance.

“There may be strong political or emotional arguments for legalizing the DACA population, but there are not strong economic arguments for it,” she said.

All told, U.S. Citizenship and Immigration Services has approved more than 825,000 people for DACA over the eight years it has been in effect. As of the end of 2019, DACA still covered 649,070 people.

About 80% are from Mexico, and another 9% are from the three key Central American countries of Guatemala, Honduras and El Salvador. Outside of the Western Hemisphere, South Korea has the most DACA recipients with about 1% of the total.

About 12% of DACA recipients have criminal records, though most of those weren’t enough to prevent them from joining the program.

A small number have been ousted for criminal behavior, including 760 in 2016 and 820 in 2017. USCIS says it hasn’t run those numbers since then.

The Washington Times has tracked at least a dozen instances of Dreamers arrested at the southern border on suspicion of smuggling illegal immigrants.

According to court documents, they were getting paid anywhere from a few hundred to several thousand dollars per person.

In one incident from February, Border Patrol agents saw an SUV pick up illegal immigrants. As agents began to chase the vehicle, the driver stopped to let the migrants out and tried to flee. Agents had to use a tire deflation device to bring the SUV to a halt. When the driver refused to comply with orders, the agents smashed a window to pull him from the car.

Oscar Iram Morales-Valencia told agents he was a DACA recipient and smuggled for a living, getting $500 per person, according to court documents.

Several DACA recipients have faced murder raps over the years. In a prominent case in North Carolina, a Dreamer was charged with killing four people, including a one-time contestant on the reality show “America’s Next Top Model.”

That man, Emmanuel Jesus Rangel-Hernandez, had gang ties that should have made him ineligible for the program, but he was approved anyway. His arrest in 2015 forced the Obama administration to make changes to prevent Dreamers with gang associations from gaining status.