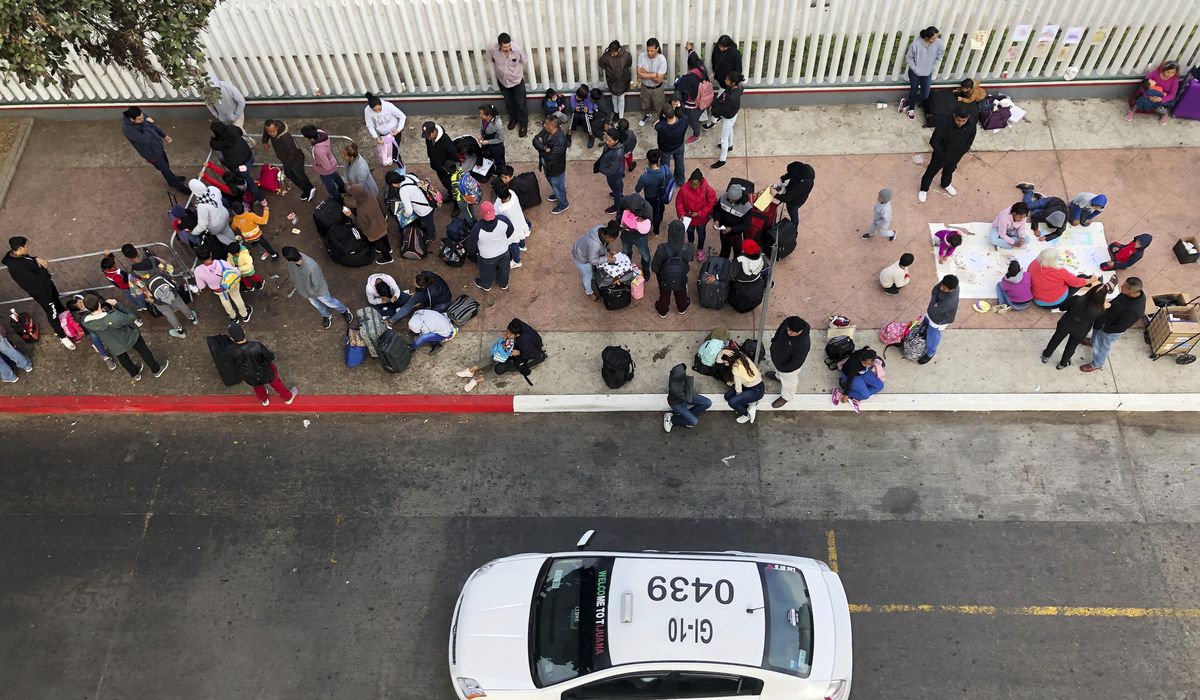 A federal judge struck down a key part of the Trump administration’s immigration crackdown framework late Tuesday, ruling that Homeland Security cut too many corners when it tried to block asylum seekers from picking and choosing which country they settle in.

Known as the “third-country” rule, it was intended to prevent Central Americans from crossing Mexico — where they could have claimed asylum — in order to reach the U.S.

Administration officials believe that many undocumented immigrants were abusing the system with bogus claims, and requiring asylum-seekers to make their claims in Mexico would prevent them from coming.

Judge Timothy J. Kelly said the policy might have been legal but officials didn’t follow the notice and comment requirements laid out in the Administrative Procedure Act, which governs major new regulations and rules.

Judge Kelly, a Trump appointee to the bench, said Homeland Security could also have argued there were important foreign policy reasons not to go through those hoops, or given a broader factual basis for the policy, but they didn’t do that either. All they offered, he said, was a newspaper article, which he said was too thin a basis.

It’s the second time in recent weeks that a major Trump immigration policy has succumbed to that argument, following last month’s ruling by the Supreme Court that Homeland Security bungled the phaseout of DACA.

In the near term, the ruling is unlikely to have much effect because the administration, citing public health powers during the coronavirus pandemic, is immediately ousting most of those who show up at the border illegally.

But the third country rule was one of a number of steps the Trump administration had taken to get a handle on last year’s record surge.

“The rule had a devastating impact on asylum-seekers, and we are glad to see Judge Kelly clearly state that this administration is not above the law even as it tries to villainize refugees,” said Keren Zwick at the National Immigrant Justice Center.

The ruling is similar to another case pending on the West Coast, where a federal appeals court also decided against the asylum crackdown. That ruling was stayed by the Supreme Court.

The Trump administration has repeatedly been tripped up by the Administrative Procedure Act.

A year ago, the administration’s failure to follow that law helped sink President Trump’s attempt to add a citizenship question to the 2020 census. It has also delayed attempts to give states more flexibility under Obamacare.

But it’s in the area of immigration where the law has really hurt.

Attempts to end Temporary Protected Status for hundreds of thousands of immigrants who are in the U.S. illegally was halted because a court found APA violations. Five courts also ruled against Mr. Trump’s attempt to require immigrants to be financially self-sufficient, citing APA violations — though the Supreme Court has allowed that policy to go into effect while the cases are being argued.

In the case of the third-country rule, the administration reasoned that if someone was a legitimate asylum-seeker, they should be safe in the first outside country they reached. In most cases, that means Central Americans crossing Mexico should claim asylum in Mexico.

But few of those coming to the U.S. will qualify for asylum. Instead, the claims are often a cover to get into the country, then gain a foothold here.

If told they would be made to request asylum in Mexico, most would stop coming, the administration said — and indeed, that has proved to be the case, with a massive drop in illegal immigration at the southwest border over the last year.

The Trump administration had said Judge Kelly should defer to Homeland Security’s expertise, arguing that if they had gone through the usual notice-and-comment process, it would have taken months and would have sparked a wave of migrants trying to beat the deadline.

Judge Kelly said that’s not the way it works.

“The question, though, is whether Defendants’ conclusory prediction of a surge in asylum seekers so great and so rapid as to threaten life or defeat the very purpose of the rule if notice-and-comment procedures were followed is entitled to deference on this record. And Circuit precedent commands that it is not,” he wrote.

The Dow erases all of its gains since Trump took office

Coronavirus fears continued to inject unprecedented volatility into United States markets on Wednesday, hammering stock prices, roiling oil prices and even taking the shine off of gold.  The Dow Jones Industrial Average closed down 1,338 points or 6.3 percent – its lowest level since February 2017. During the session, the 30-share index crossed a milestone,… 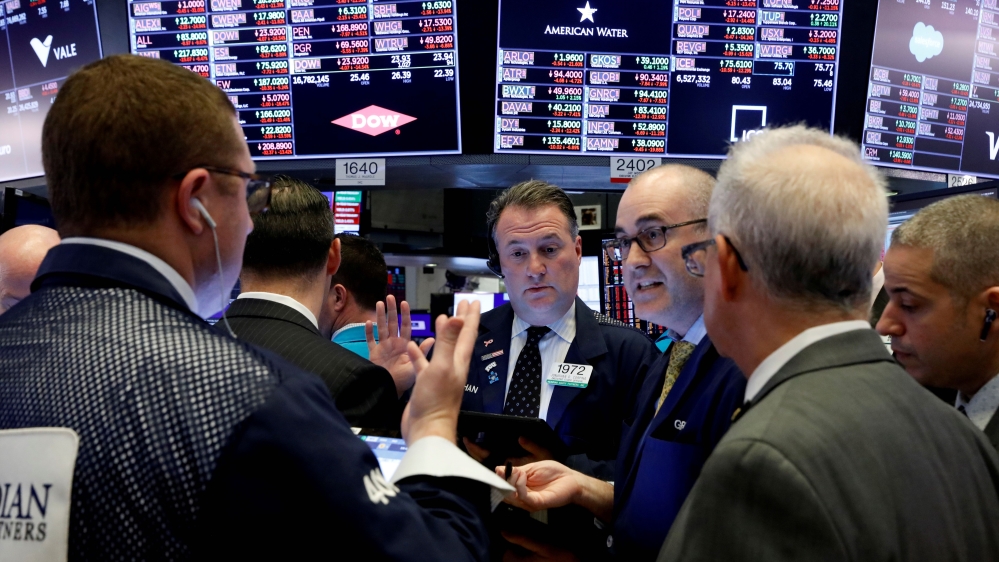 Coronavirus fears continued to inject unprecedented volatility into United States markets on Wednesday, hammering stock prices, roiling oil prices and even taking the shine off of gold.
The Dow Jones Industrial Average closed down 1,338 points or 6.3 percent – its lowest level since February 2017.
During the session, the 30-share index crossed a milestone, falling more than 7 percent to erase all of its gains since US President Donald Trump took office, before recovering some ground in the final stretch of trading.
The broader S&P 500 – a gauge for the health of US retirement and college savings accounts – closed down 5.17 percent. At one point, the index tumbled more than 7 percent, tripping circuit breakers to halt trading for 15 minutes.
The Nasdaq Composite Index finished the session down 4.7 percent.
More:

Can Trump’s plan to give away money ease coronavirus blow?

Mnuchin says US unemployment could surge without rescue: Reports

Wednesday marked a sharp reversal from Tuesday, when more emergency moves by the US Federal Reserve to unclog credit markets – and details of the White House’s one-trillion-dollar stimulus plan for countering the disruptions of coronavirus – helped lure buyers back into stocks.
But moods turned decisively pessimistic as more bad economic news hit the headlines on Wednesday.
Shares of Boeing Co were brutalised again – falling more than 17 percent. The stock is more than 70 percent off of its 52-week high.
Detroit’s big three automakers announced on Wednesday that they will temporarily shutter all US factories. Ford Motor Co and General Motors will also close plants in Mexico and Canada for a limited time.
Delta Airlines announced that it is cutting executive pay and slashing its flying capacity by 70 percent until demand starts to recover from the blow delivered by coronavirus.
The National Restaurant Association is seeking a $455bn government aid package, predicting that the industry could lose $225bn in sales over the next three months to coronavirus, along with five to seven million jobs.
And the US’s biggest mall owner, Simon Property Group, announced that it is closing all of its malls and outlets until at least March 29.
Stocks weren’t the only asset class getting clobbered on Wednesday.
US benchmark West Texas Intermediate crude fell to its lowest level in more than 18 years, touching a session low of $20.06 a barrel before recovering to around $22 a barrel.
Gold, once a safe haven but no longer, also came under pressure, as investors sold the precious metal to unlock cash to cover other losses.
With coronavirus now being reported in all 50 US states, uncertainty over the extent of the economic damage the outbreak will leave in its wake has analysts and economists scrambling to reassess forecasts made less than a week ago and injecting a healthy dose of hedging into predictions for how the second half of the year could shake out.
“The rapid escalation of measures to contain the coronavirus outbreak suggests that the economic damage will be even larger than we anticipated only a few days ago, and we are now pencilling in a 10% annualised decline in GDP in the second quarter.” Andrew Hunter, senior US economist at Capital Economics, wrote in a note on Wednesday. “For now we expect activity to begin to rebound over the second half of the year, but that will depend on the virus being brought under control over the next few months and on Congress stepping up to the plate with a substantial fiscal response.”
Investors are also becoming concerned as more firms draw on credit lines to weather the coronavirus onslaught. And though talk of government stimulus packages and bailouts for certain industries, such as airlines, is intensifying, many analysts are concerned about how politics could slow the delivery of measures.
“The markets are unlikely to be very patient for this process, keeping open the risk that something breaks before politicians come together on a credible deal that sets the stage for a recovery once the virus restrictions start to be lifted,” Steven Ricchiuto, US chief economist at Mizuho Securities USA, wrote in a note on Wednesday.
Continue Reading…