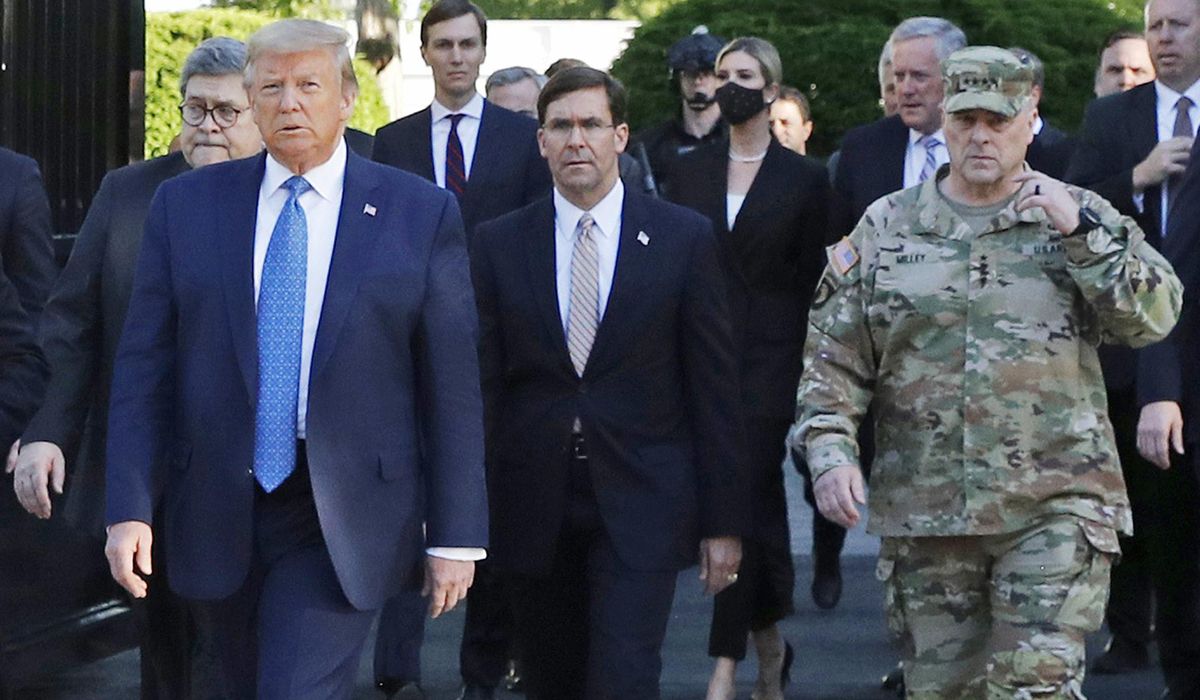 Distrust between the commander in chief and Pentagon leadership has reached a near-unprecedented level, analysts and military insiders say, with both sides of the Potomac eyeing the other anxiously as Election Day draws near.

As President Trump publicly bashes his own past and present defense officials and casts them as tools of the military-industrial complex, Pentagon leaders are working overtime to distance themselves from an increasingly ugly political contest and to ensure they aren’t dragged into any post-election electoral dispute between the incumbent and Democrat Joseph R. Biden.

Taken together, those dynamics have sparked a level of tension and mutual skepticism between the White House and Pentagon that has rarely been seen before, specialists say. The clearest example may be the relationship between Mr. Trump and Defense Secretary Mark Esper, which looks to be chilly at best following a series of high-profile clashes on hot-button policy issues such as the Confederate flag and the military’s role in policing civil unrest.

“There’s just great unease in the Pentagon,” said Jim Townsend, former deputy assistant secretary of defense for European and NATO policy during the Obama administration. “There’s uneasiness among the professionals there, both military and civilian.”

“Esper is probably uneasy about what the White House might end up asking him to do,” Mr. Townsend told The Washington Times. “But the word also is he’s not going to be around” much longer.

Indeed, there was widespread speculation — and, in some corners, an expectation — that the president would fire Mr. Esper after the Pentagon chief publicly opposed a plan to deploy active-duty military troops to quell riots in American cities over the summer. Mr. Trump ultimately abandoned that plan and Mr. Esper has remained in his job, though it seems likely the president will pick a new defense chief if he wins reelection in November.

Mr. Esper’s uncertain future is one factor that has contributed to the tense situation. Another is the growing fear among current and former military officials that the president could seek to enlist the military for electoral purposes, perhaps to deal with post-election demonstrations.

Other observers believe the military ultimately may have to oust Mr. Trump from the White House if he loses to Mr. Biden but refuses to leave. The president has said he’ll accept the results of a fair election.

There are signs the increasing political outspokenness of ex-military brass is starting to worry those still in the ranks. Marine Corps Commandant Gen. David Berger, in a recent “State of the Marine Corp” online session organized by Defense One, said even retired military leaders should be careful about offering partisan political opinions.

“When your introduction is ‘retired admiral,’ ‘retired general,’ there is a direct connecting tissue back to those of us who are wearing uniform today, and we must remain apolitical,” he said. “I ask them to be very thoughtful about engaging either side, it doesn’t matter, in partisan politics.”

For their part, the Pentagon’s current top leaders insist they have no intention of wading into politics.

In written answers to lawmakers last month, Joint Chiefs of Staff Chairman Gen. Mark A. Milley said flatly that the armed forces will have “no role” in the American electoral process.

“I believe deeply in the principle of an apolitical U.S. military,” Gen. Milley said.

Combined with Mr. Esper’s previous opposition to the deployment of active-duty forces to American cities, it’s clear both men want to avoid politics and, unless absolutely necessary, avoid sending troops to clash with fellow American citizens.

“Everybody is keeping their fingers crossed and not knowing what to expect,” Mr. Townsend said of the current environment.

Politics and civil unrest are just the most recent rifts.

As racial unrest gripped much of the nation over the summer after the death of George Floyd, a black man, while in Minneapolis police custody, the Pentagon began a review of 10 Army bases named after Confederate generals. Mr. Trump publicly vowed to block any such changes.

Mr. Esper and other military officials also penned a carefully worded policy that effectively banned the Confederate flag at armed forces installations. The policy did not actually address the specific flag but instead laid out criteria for which banners could be flown — criteria that the Confederacy’s “Stars and Bars” did not meet.

The Pentagon’s delicate handling of the issue helped avoid another public confrontation with the president.

For his part, Mr. Trump has leaned into the distance between himself and Pentagon leaders, appealing to veteran and active-duty voters by criticizing their superiors in unusually blunt terms.

“I’m not saying the military’s in love with me,” Mr. Trump said at a recent news conference. “The soldiers are. The top people in the Pentagon probably aren’t because they want to do nothing but fight wars so that all of those wonderful companies that make the bombs and make the planes and make everything else stay happy.”

White House officials sought to add context those comments, suggesting that the president wasn’t referring to Mr. Esper or Gen. Milley specifically but instead speaking about broader issues of military policy and spending.

Mr. Trump argues that he has followed through on a major campaign promise to wind down endless wars in the Middle East, and it’s true that he has significantly reduced America’s military presence in both Afghanistan and Iraq.

But an apparent disconnect between Mr. Trump’s foreign policy approach — a key piece of his hallmark “America First” agenda — and the views of his appointees has only added fuel to the fire.

“America has never seen this level of mutual distrust between the president and his military leaders. Firstly, President Trump appointed Pentagon leaders who opposed him and the America First agenda,” said J.D. Gordon, former Trump campaign national security adviser and Pentagon spokesman. “Never have so many top political appointees been so richly, yet undeservedly rewarded in this country.”

Indeed, some former Trump appointees have now turned into some of his harshest critics. Former Defense Secretary James Mattis is perhaps the best example, with the retired Marine Corps general declaring over the summer that Mr. Trump is “the first president in my lifetime who does not try to unite the American people.”

Retired Air Force General Paul Selva, whom Mr. Trump himself re-nominated for a term as vice chairman of the Joint Chiefs of Staff early in his presidency, was one of nearly 500 military and national security leaders who signed a recent letter strongly endorsing Mr. Biden for president.

‘They don’t trust him’

While Mr. Gordon argued that personnel decisions have been a major contributing factor to today’s antagonistic atmosphere, he said the unconventional Mr. Trump has taken other actions that have deepened the divide.

The president “has at times put his top national security leaders in difficult positions,” Mr. Gordon told The Times. “Whether a photo op after clashing with a civilian mob outside the White House, referring to Secretary Esper as ‘Esperanto,’ which is some made-up international language, or publicly calling out a military-industrial complex, it’s easy to see why they don’t trust him.”

The June 1 clash between law enforcement and protesters in Lafayette Square brought about arguably the clearest break so far between Mr. Trump and top military leaders. After demonstrators were aggressively cleared out of the area, the president walked to St. John’s Episcopal Church and posed for photographs along with other top administration officials, including Mr. Esper.

Joint Chiefs of Staff Chairman Gen. Mark A. Milley also was with Mr. Trump outside the White House, clad in his battle dress uniform, though he was not in the St. John’s photo.

In the days afterwards, both men broke with the president in their own ways. Mr. Esper came out against the president’s proposal to invoke the Insurrection Act and send active-duty forces into American towns.

“The option to use active-duty forces in a law enforcement role should only be used as a matter of last resort and only in the most urgent and dire of situations. We are not in one of those situations now,” the secretary said.

“I should not have been there,” he said in pre-recorded remarks to the graduating class of the National Defense University on June 11.

“My presence in that moment and in that environment created a perception of the military involved in domestic politics,” he said. “As a commissioned uniformed officer, it was a mistake that I have learned from, and I sincerely hope we all can learn from it.”

Whether by coincidence or design, Mr. Esper was far from the U.S. political spotlight this week as Mr. Trump engaged in his first critical debate with Mr. Biden.

As Washington was consumed Wednesday with the fallout from the contentious debate in Cleveland, Mr. Esper was arriving in Tunisia for a multi-day tour of North Africa that will also take him to Algeria and Morocco this week.