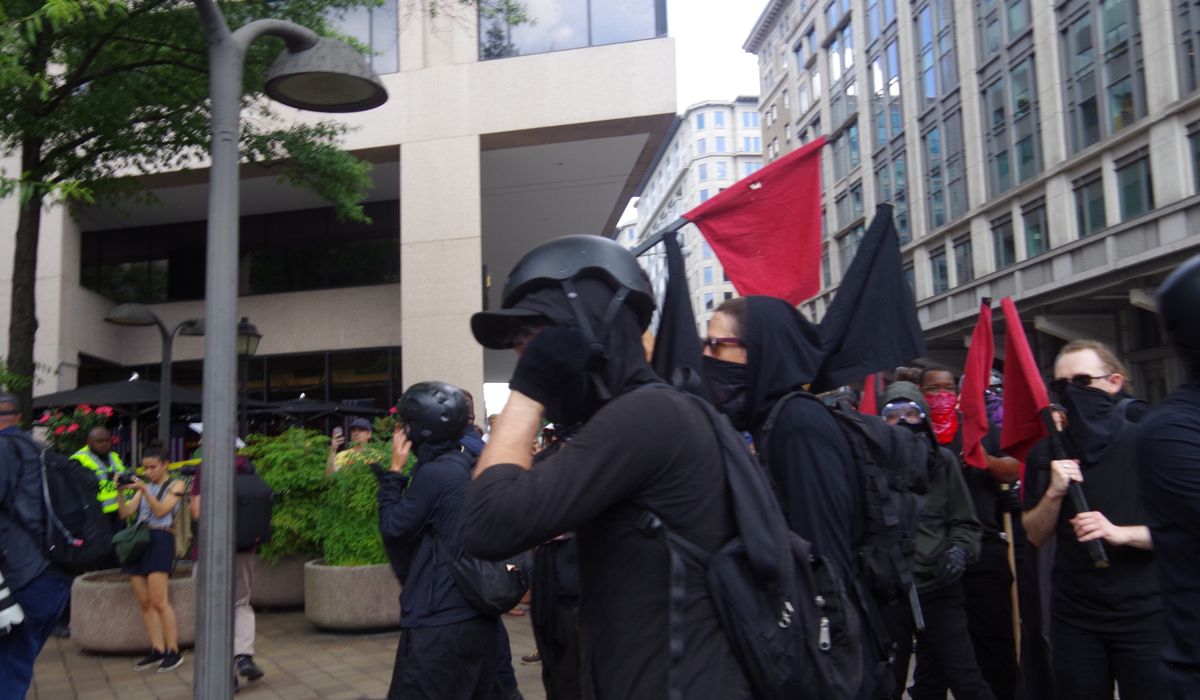 Oregon’s notoriously secretive Rose City Antifa meets regularly “like a business” to train in weapons and tactics, including eye-gouging, as well as how to engage in violence without getting caught, according to a video released Thursday by Project Veritas.

In what may be the first video of Antifa’s inner workings, the hidden-camera footage showed what was described as training sessions — in some cases using PowerPoint — by Rose City Antifa leaders inside a Portland, Oregon, bookshop before a room of apparently young, white recruits.

“Practice things like an eye gouge. It takes very little pressure to injure someone’s eyes,” said a man identified as Nicholas Cifuni in a “recon and tactics” class.

He was also recorded on audio delivering a profanity-laced warning to recruits about being too obvious while engaging in violence lest they draw the attention of police.

“Don’t be that f***ing guy with the goddamned spiked brass knuckles getting photos taken of you,” he said. “Police are going to be like, perfect we can prosecute these f**kers, look how violent they are, and not that we’re not, but we need to f**ing hide that shit.”

A heavily disguised insider wearing a black “Rose City Antifa” hoodie said in an interview that he was a “prospect for Rose City Antifa,” recruited on ProtonMail. He was later told to meet an Antifa recruiter at a Starbucks.

“How violent is antifa or Rose City Antifa in particular? They do not hesitate to either push back or incite some kind of violence,” said the insider. “In our classes and in our meetings, before we do any sort of demonstration of black bloc, we talk about weapons detail and what we carry and what we should have.”

Said an instructor identified as Ashes on the undercover video: “The whole goal of this, right, is to go out and do dangerous things as safely as possible.”

Mr. Cifuni also told activists to “consider destroying your enemy,” rather than showing off boxing or kickboxing moves.

The insider expressed surprise at how organized the group was, speculating that Antifa may be receiving outside support, in contrast to its image as hierarchy-rejecting street anarchists.

“With Rose City Antifa, it seems much more structured, almost like a company or like a business,” said the insider. “I feel like there is some type of outside funding, influence or resources being used.”

He said Rose City Antifa was founded by Caroline Victorin, who has since moved to Sweden with her husband, a dual citizen, adding that the group has a “European connection.”

Founded in 2007, Rose City Antifa has been described as the nation’s oldest such group.

“This is organized terrorism,” tweeted Mr. Ngo, who was assaulted, “milkshaked” and robbed by Antifa activists in June 2019, an attack caught on video.

The Trump administration has identified Antifa activists as instigators of the violent rioting sweeping U.S. cities, resulting in attacks on business owners and police and causing untold millions in property damage, in the wake of George Floyd’s death on May 25 at the hands of Minneapolis police.

President Trump said Sunday he will designated Antifa as a U.S. domestic-terrorism outfit, while Minnesota officials have said that white supremacists, drug cartels and even organized crime may be involved in the mayhem.

A message at the end of the video said that, “The Project Veritas Undercover Journalist ‘retired’ from Rose City Antifa some time ago.”

“Depending on the setting, if I were to be caught or found out in a setting where I am present with them, it could escalate into violence against me,” said the insider.