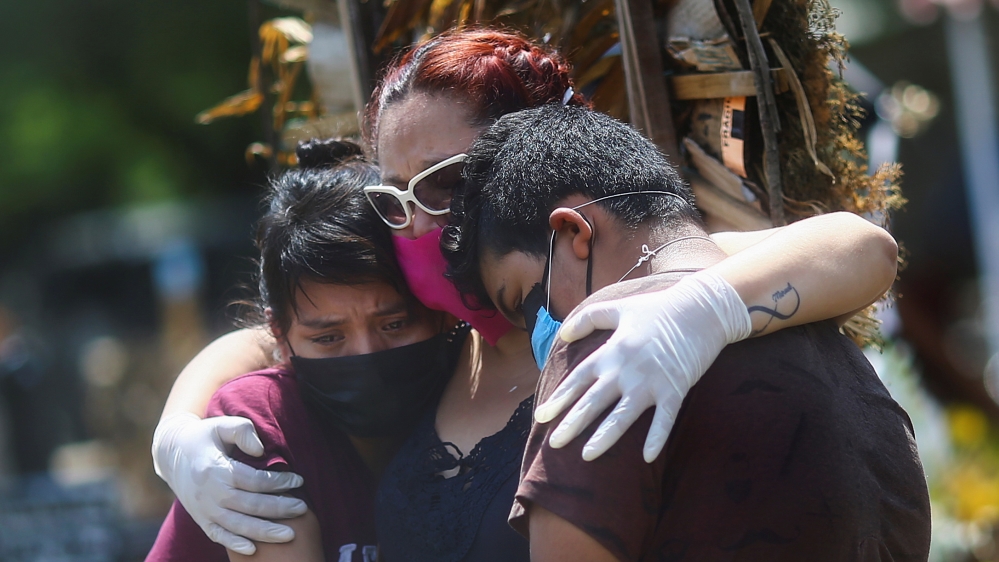 Facebook and Twitter have pulled posts by US President Donald Trump for violating their COVID-19 misinformation rules.

Brazil’s top court has ordered President Jair Bolsonaro to draw up a plan within 30 days to reduce COVID-19’s threat to the country’s Indigenous people.

India has recorded the biggest single-day coronavirus fatalities of 904 in the past 24 hours.

More than 18.7 million people around the world have been diagnosed with the new coronavirus, while the global death toll surpassed 704,000 people. More than 11.2 million have recovered.

Here are the latest updates:
Thursday, August 6
10:00 GMT – Indonesia’s COVID-19 infections rise by 1,882
Indonesia reported 1,882 new coronavirus infections and 69 additional deaths on Thursday, data from government’s COVID-19 task force showed.
Those brought the total number of cases to 118,753 and deaths to 5,521.
Indonesia’s case tally was surpassed by neighbouring Philippines, which with 119,460 coronavirus cases has the most infections in East Asia.
09:40 GMT – Human trials of virus vaccine set to begin in Indonesia
Human trials on a potential coronavirus vaccine are due to start in Indonesia next week as part of a collaboration between state-owned pharmaceutical company Bio Farma and China’s Sinovac Biotech Ltd, a senior researcher said.
The launch of the vaccine trial comes as Indonesia has struggled to contain the spread of the novel coronavirus, with a consistently escalating number of cases.
The phase 3 clinical trial is set to begin on August 11 and will involve 1,620 volunteers aged between 18 and 59, Professor Kusnandi Rusmil, head researcher at Bandung’s Padjadjaran University, told reporters.
09:00 GMT – Canadian jailed in Myanmar for holding services during virus ban
A Myanmar court sentenced a Canadian preacher who said Christians were immune to the novel coronavirus to jail with hard labour for three months for holding church services in defiance of a ban on gatherings during the outbreak.
David Lah, a Canadian of Burmese origin, and another man, Myanmar national Wai Tun, were detained under a disaster management law over services they held in the city of Yangon in April.
A ban on public gatherings in the commercial capital took effect in mid-March. Judge Moe Swe told reporters both men had been convicted of breaking administrative rules.
08:40 GMT – Hong Kong reports 95 new coronavirus cases
Hong Kong reported 95 new coronavirus cases on Thursday, of which 91 were locally transmitted, as authorities tried to contain the virus, which has seen a resurgence in the global financial hub over the past month.
Around 3,800 people have been infected in Hong Kong since late January, 44 of whom have died. On Wednesday, 85 new cases were reported.
The government said it was extending the work from home period for civil servants until August 16.

Around 3,800 people have been infected in Hong Kong since late January [Tyrone Siu/Reuters]

08:20 GMT – UK to slap quarantine on travellers from Belgium: report
The British government will slap a quarantine on arrivals from Belgium after a rise in coronavirus cases, the Daily Mail newspaper reported.
The Mail said ministers are expected to approve the quarantine at a meeting shortly. The transport ministry declined to comment on the report.
The United Kingdom has already imposed a 14-day quarantine on travellers from Spain and Luxembourg.
08:00 GMT – Russia reports more than 5,200 new coronavirus cases
Russian authorities reported 5,267 new cases of the novel coronavirus, pushing its national tally to 871,894, the fourth largest in the world.
The official death toll rose to 14,606, after officials said 116 people had died across the country in the last 24 hours.

The official death toll has risen to 14,606 across the country in the last 24 hours [Sefa Karacan/Anadolu]

07:30 GMT – Poland faces rising trend of COVID-19 cases: minister
Poland may see a further increase in coronavirus infections, which could reach up to 700 per day during and after this weekend, the health minister said.
On Tuesday, Poland registered its highest daily tally of reported cases at 680.
07:00 GMT – Toyota’s Q1 profit nearly wiped out as coronavirus erodes sales
Toyota Motor Corp posted a 98 percent plunge in its first-quarter operating profit as the coronavirus pandemic halved it global sales.
Japan’s top automaker reported a profit of 13.9 billion yen ($131.73m) for the three months ended June, its worst since the June 2011 quarter. Still, it was better than an average estimate for a loss of 179 billion yen based on a Refinitiv poll of seven analysts.
The bleak results underline the challenges being faced by the global auto industry due to the health crisis that has shuttered factories this year and kept customers out of dealerships, hitting production and sales.
06:25 GMT – Ukraine reports record daily new coronavirus cases
Ukraine reported a record daily high of 1,271 new coronavirus cases on August 4, the country’s council of security and defense said.
The number of new infections has increased sharply in the past two months following the gradual lifting of restrictions that began in late-May.
The total number of cases rose to 75,490, including 1,788 deaths and 41,527 recovered as of August 5.

06:00 GMT – India reports biggest number of deaths with 904
India has recorded the biggest single-day fatalities of 904 in the past 24 hours as fresh coronavirus infections surged by another 56,282 cases to reach nearly two million.
The Health Ministry said the total fatalities touched 40,699. India has recorded 20,000 deaths in the past 30 days.
The ministry also said the recovery rate has improved to 67 percent from 63 percent over the last 14 days. Nearly 600,000 patients are still undergoing treatment. The case fatality rate stands at 2.09 percent.
05:45 GMT – Melbourne enters strict new coronavirus lockdown
Australia’s second-biggest city of Melbourne began the first day of a six-week total lockdown with the closure of most shops and businesses raising new fears of food shortages, as authorities battle a second wave of coronavirus infections.
Shops were boarded shut and streets were deserted in the city of about five million people, the capital of Victoria state, which reported 471 new COVID-19 cases and eight deaths in the past 24 hours.
Australia has now recorded about 20,000 COVID-19 cases and 255 fatalities, still far fewer than many other developed nations, but the Victorian outbreak threatens to ruin that record and spill into other states.