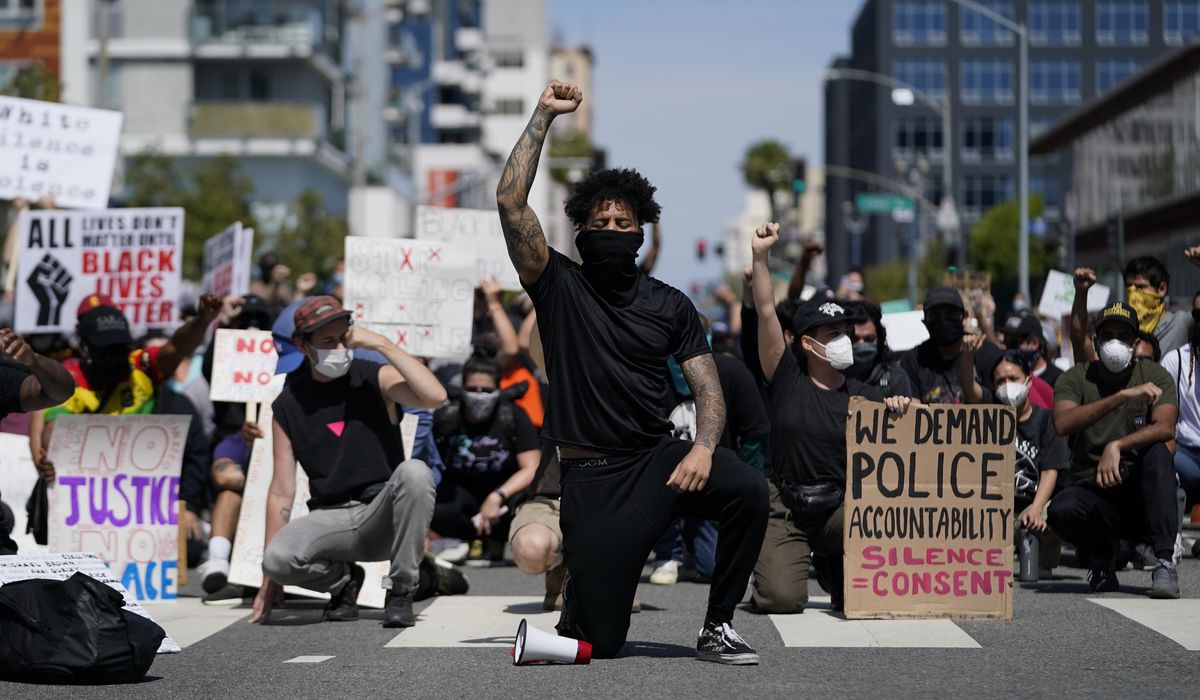 Black Lives Matter is not inherently political so federal employees are free to express their support for the movement while on the job, according to the government agency that polices such matters.

The Office of Special Counsel says employees can wear BLM pins, post supportive messages to their social media accounts during work time, or let fellow employees or members of the public know of their support.

They can even fundraise for the movement as long as they don’t back a specific political candidate while doing so, the OSC said in guidance sent to federal agencies late last week.

“As applied to BLM, this means that an employee is not prohibited by the Hatch Act from expressing support for, or opposition to, the BLM movement while on duty or in the workplace,” the OSC ruled.

The agency had previously ruled that the tea party movement was a social force, not a political organization, and the agency said BLM fits the same mold.

The Hatch Act governs what types of political activities are acceptable from U.S. government employees, particularly while on the job. Violations can be punished by reprimands, suspensions or firings.

Political campaign slogans are illegal — so workers could not post a “Make America Great Again” sign in a cubicle. But “phrases related to issues” don’t rise to the same threshold, so someone could use “Black Lives Matter” as an email signature, under the guidance.

“BLM is a ‘hot-button’ issue and both politically and culturally salient. But BLM terminology is issue-based, not a campaign slogan. Therefore, using BLM terminology, without more, is not political activity,” the OSC said.

The question has apparently roiled federal departments and agencies in recent weeks, as the country has faced protests over policing and racism. Agencies were disseminating the new OSC guidance this week.

OSC says its ruling turns on how deeply BLM is involved in partisan politics.

According to OSC, BLM leaders have generally kept clean — though in 2016 they did negotiate with the Democratic National Committee to try to sponsor a BLM-themed debate. The party offered them a forum, but refused to add a specific debate.

Likewise the Black Lives Matter Global Network, the largest BLM group, which in 2016 pondered endorsing a candidate for president, ultimately did not do so, OSC said.

This election, BLMGN is pushing for increased voter turnout, and is active on issues of policing, education and the like — but has not endorsed any party or candidate. And even though most people might see the group as more aligned with Democrats, “that does not make it a ‘partisan political group’ for purposes of the Hatch Act.”

The BLMGN didn’t respond to a request for comment on the decision, nor on the comparison between BLM and the tea party, which was the basis for the new ruling.

OSC said that both BLM and the tea party are blanket terms for a movement for social change. And both movements span a number of groups that claim fealty to those ideas.

Since OSC repeatedly ruled use of “tea party” by federal employees was allowed, so it deems BLM acceptable.

The Project on Government Oversight, a watchdog that has taken a close interest in Hatch Act policies, called the OSC guidance the right balance.

“The bottom line is that Black Lives Matter is not a partisan organization, nor is it a partisan issue. And federal employees are and should be free to express their support for it, both in and out of the federal workplace,” said Nick Schwellenbach, senior investigator at POGO.

Hans von Spakovsky, senior legal fellow at the Heritage Foundation, said some of BLM’s views of America are “warped and inaccurate,” though as long as the groups avoid politicking they’re on safe legal ground.

“But while it may be legally OK for federal employees to post BLM posters on the walls of their office, I think doing so is unwise because it may make many of their clients — the public — who also disagree with BLM uncomfortable or intimidated,” he said.

OSC, in its new guidance, didn’t deal with other thorny issues, such as whether employees on government time backing “Blue Lives Matter” — support for police — would cross any lines.

The agency’s role as word police has come under fire in the past.

In 2018 OSC ruled that backing impeachment of Mr. Trump, or even adopting terms such as “#resist” or “resistance” could run afoul of the Hatch Act because they were seen as advocating against Mr. Trump.

A number of critics, including POGO and congressional Democrats, asked OSC to revoke that guidance.