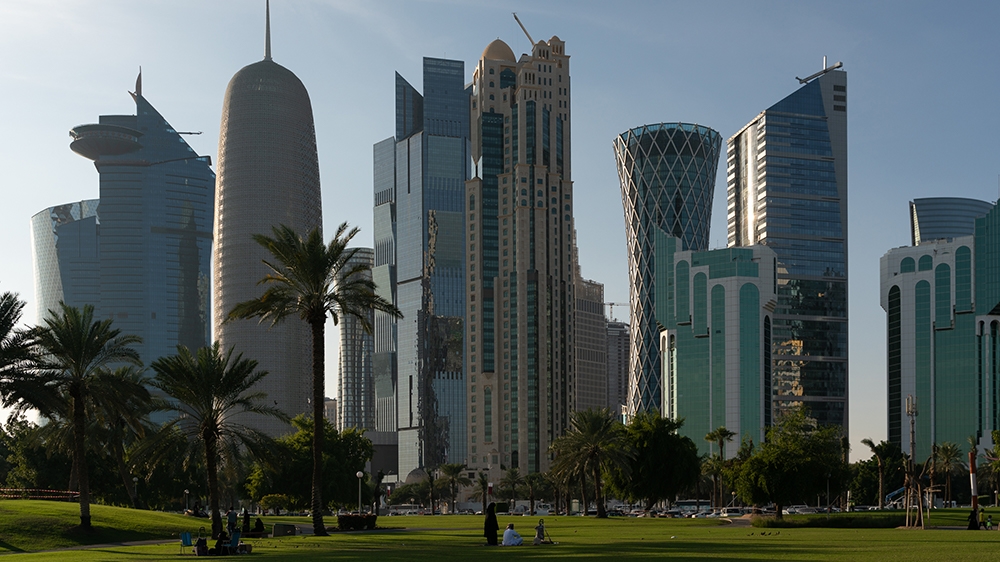 Doha, Qatar – Three years into an illegal blockade, Qatar has ramped up local production allowing the tiny Gulf peninsula to not only overcome the challenges of the siege but also weather plunging oil prices and a deadly pandemic.
On June 5, 2017, the four Arab states of Saudi Arabia, the United Arab Emirates (UAE), Bahrain and Egypt cut all diplomatic and trade ties with Qatar, accusing it of supporting “terrorism” and destabilising the region – allegations Doha has consistently denied.
More:

In the days and weeks following the dispute, cargo ships and hundreds of planes laden with food from Turkey, Iran, Oman, Morocco and India entered Qatar to ensure there were no critical shortages of supplies.
With Qatar reliant on imports for 90 percent of its food at the time, it had to act quickly to counter the effects of the blockade.
As the crisis continued, Doha dramatically boosted its domestic production of food and developed alternative trade links and flight routes.

Qatar working to transform into a ‘smart country’

While Qatar may have incurred heavy financial losses as a result of the blockade – estimated at $43bn – it has become significantly more independent and ready for the challenges posed by the new coronavirus, analysts say.
“The blockade has prepared Qatar well to deal with the supply chain disruptions we have seen globally during the COVID-19 crisis,” said Andreas Krieg, assistant professor of defence studies at King’s College London.
“Qatar has achieved a lot more self-sufficiency across the food and agricultural sector, as well as the transport sector, making Qatar more autarkic and independent in managing supplies chains,” Krieg told Al Jazeera.
“Also, in the industrial sector, Qatar has used the blockade as an opportunity to diversify and expand local production where possible, which has increased its resilience.”
The Qatari government noted the country will be one of the few in the world to run a fiscal surplus in 2020.
“Our response to the illegal blockade has prepared us for unexpected economic shocks like the coronavirus pandemic,” the Government Communications Office said.
“Lessons have been learned over the last three years about self-reliance and the resilience of our economy. Since the start of the blockade, we have accelerated initiatives to diversify our economy and reduce our reliance on imports. As a result, Qatar’s economy is well equipped to withstand external pressures and capitalise on new opportunities.”
Food security
Ahead of the blockade, Qatar relied mainly on dairy product imports from Saudi Arabia with 400 tonnes of milk and yoghurt brought in daily.
But within months of the siege, Qatar set up various sustainable schemes. It imported thousands of cows from Europe and the US, and set up its first local dairy and meat farm, Baladna. This allowed the Gulf state to eventually become more food self-sufficient and even move towards exporting dairy products.
To bolster its food supplies, many local companies worked with dozens of farms to provide fresh fruit and vegetables at the supermarkets.
Moves to strengthen Qatar’s food security proved increasingly valuable amid the coronavirus pandemic.
Vast warehouses that were stacked with key staples including rice, oil and sugar as a response to the blockade ensured that supermarket shelves remained full during the peak of the pandemic weeks, while basic supplies became depleted in many countries around the world.

Nasser Al Khalaf, CEO of the Agrico Agriculture Company, said homegrown technology played a major role in the transformation.
“Three years back, the local production of fruits and vegetables did not exceed 10 percent. Today we are almost 30 percent. Since the technology and know-how is available locally, then there is nothing to stop us from reaching our targets,” he said.
Qatar achieved the top spot for food security in the Middle East and is ranked 13th globally in the latest Global Food Security Index compiled by the Economist Intelligence Unit.
In 2019, the International Monetary Fund said Qatar’s economy had proven resilient amid the blockade and shocks from the 2014-16 drop in hydrocarbon prices.
According to Krieg, Qatar is likely to do that again after the world saw its lowest energy prices in April.
“COVID-19 will have an immense impact on most countries around the world, especially the hydrocarbon rentier states in the Gulf. However, Qatar will fare a lot better than most of its neighbours because of a comfortable cushion from its sovereign wealth fund that will have to pump money into the economy,” he said.
New travel, trade routes
Less than six months after the blockade, Qatar inaugurated the Hamad Port – arguably the largest in the Middle East. The port played a key role in securing new marine routes and ensuring basic supplies and commodities were made available.
While Qatar Airways, the country’s national carrier, initially experienced a substantial loss in 2017 after losing access to 18 cities in the four blockading nations, its annual financial revenues have steadily grown since.
Qatar also deepened its trade relations with regional allies, namely Turkey and Iran.
“The blockade forced Doha to turn to other countries to circumvent the impact of the siege. Consequently, Qatar is much closer to Turkey and Iran as a result of the Saudi-Emirati bloc’s pressures,” said Giorgio Cafiero, founder of Gulf State Analytics.

Cutting off supply routes through the blockading countries made Iran a principle source for food, water and medicine. The trade balance between the two countries dramatically increased as a result, reaching $2bn between 2017 and 2018.
Since the blockade, Qatar has also implemented a military agreement with Turkey, first signed in 2014, allowing for the expansion of Ankara’s military presence in Qatar.
Arts and culture
In addition to food and trade, ambitious new art and cultural projects have arisen in Qatar over the past three years as it gears up for the FIFA World Cup in 2022.
In 2019, Qatar opened its National Museum, a project that cost $500m, showcasing national culture and history as well as wildlife and scientific achievements in a futuristic display.
Qatar also spent billions of dollars over the last few years collecting world-famous art to show in its state-of-the-art museums.
Patriotic fervour among Qatar’s nearly 2.7 million residents has also been on the rise over the past three years, with Qatari flags and stylised portraits of Emir Sheikh Tamim bin Hamad Al Thani displayed on skyscrapers across the capital.
Continue Reading…

As unrest grips the US, the economy adds 2.5 million jobs in May |NationalTribune.com