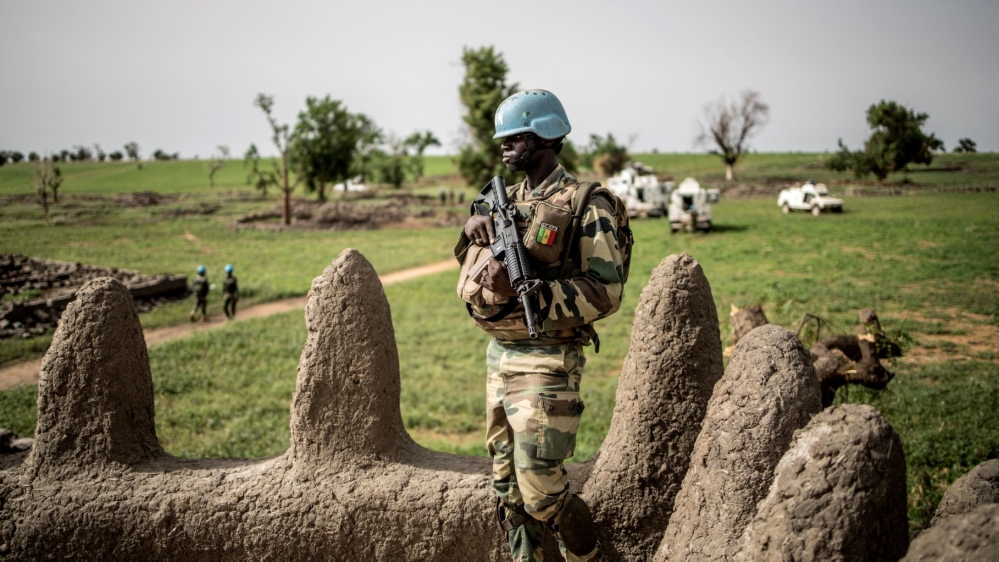 The United Nations Security Council is expected next week to renew the mandate of its peacekeeping mission in Mali, MINUSMA.
Often dubbed the UN’s most “dangerous mission”, MINUSMA will enter its eighth year at the centre of a multilayered and complicated conflict that has spread across the Sahel, a semi-arid region directly south of the Sahara desert in northwestern and central Africa.
Its challenges are myriad: a volatile environment that often proves deadly for UN forces, restricts peace-building initiatives and keeps the mission on a defensive footing; an inconsistent Malian ruling class; and a shifting and complex crisis that has exploded in the centre of the country that lacks an adequate framework for resolution.
Despite such obstacles, Security Council members have not yet been able to deny that the 15,000-strong mission, which includes 13,000 peacekeepers, is a necessity in a country considered the epicentre of the wider security crisis in the region, said Paul Melly, a consulting fellow at Chatham House’s Africa Programme.

“However difficult the track record, however troubling the situation, however slow the pace of progress, where there is any, when the Security Council is confronted with the actual reality of the situation on the ground, they come to the conclusion that there is no alternative,” he said.
“MINUSMA needs to be there.”
The mission has become “life support” for a Malian state teetering on the edge, providing critical infrastructure, in particular air transportation, for a government that has largely retreated from large swaths of the country, said Judd Devermont, director of the Africa Program at the Center for Strategic and International Studies.
“I think that without MINUSMA, for as dire and desperate as the situation in Mali is, it would slide even further down into instability, unrest and un-governability,” he said.
“The most generous thing we can say about MINUSMA is that it slows Mali’s slide … But Mali continues to devolve and worsen despite MINUSMA’s presence.”
Strategic priorities
Mali’s crisis was triggered in 2012 when ethnic Taureg separatists, allied with fighters from an al-Qaeda offshoot, launched a rebellion that took control of Mali’s north. But the armed group fighters swiftly pushed over the Tuareg rebels and seized key northern cities until they were driven out in early 2013 by French troops, together with Malian forces and soldiers from other African countries under the African-led International Support Mission to Mali (AFISMA) banner.
On April 25, 2013, the UNSC established MINUSMA, or the United Nations Multidimensional Integrated Stabilization Mission, which took over operations from AFISMA in July 2013.
MINUSMA’s strategic priority first focused on the sprawling north, a flat and unforgiving desert and semi-desert area about the size of Afghanistan. Its mandate included protecting civilians, aiding in implementing a 2015 peace agreement between the government and some separatist groups in the north, helping to re-establish the state authority and building the security sector, which was and continues to be largely absent in some regions.
The mission is also charged with monitoring human rights abuses by armed groups and the array of security forces operating in the country, a tenuous role, at times, since MINUSMA works in cooperation with many of those forces.

Mali’s President Ibrahim Boubacar Keita inspects the damage after an attack by gunmen on Fulani herders in Ogossagou, Mali in March of 2019 that killed at least 160 people [File: Reuters]

In 2018, the mission began to shift focus to Mali’s hot semi-arid centre as the situation there began to devolve drastically. A year later, MINUSMA added a second strategic priority that includes helping the Malian government restore stability in central Mali, while also protecting civilians, helping to restore the presence of the state and promoting political peace initiatives.
In this region, various armed groups – including Jama’at Nusrat al-Islam wal-Muslimin (JNIM), an offshoot of al-Qaeda, and the Islamic State of Greater Sahara, an ISIL (ISIS) affiliate – have been jockeying for control while exploiting poverty and inflaming tensions between ethnic groups, notably Fulani herdsmen and Dogon farmers. Those communities have already been pushed to a breaking point as climate change stifles resources in a land where the dry season is long and rainfall unreliable.
Attacks in Mali have spread into neighbouring Niger and Burkina Faso and grew fivefold between 2016 and 2020, with 4,000 people killed in 2019, up from about 770 killed in 2016, according to the UN. This year, the unrest including armed group attacks and intercommunity violence has so far killed 580 civilians just in central Mali.
Meanwhile, the number of people forced to leave their homes due to the rapidly deteriorating security situation in the region has surged from about 600,000 internally displaced people recorded in May 2010 to 1.5 million by April 2020.
The evolving situation, and the increase in violence perpetrated by “jihadist” armed groups in central Mali, as opposed to the northern rebel separatist groups, has created a unique position for the UN mission, said Ibrahim Yahaya Ibrahim, a senior Sahel analyst at the International Crisis Group (ICG).
“MINSUMA is not a force that does counterterrorism,” he said. “However, it collaborates with other forces that operate on the ground … So it is not unengaged in the counterterrorism arena, even though it does not engage directly in it.”
‘Most dangerous’
MINUSMA’s most recent renewal signifies a temporary truce between the United States and France, both permanent UNSC members and veto-power holders, analysts say.
The US, citing the security deterioration in recent years, has repeatedly called for a “major drawdown” in the mission and that it be repurposed with the sole aim of protecting civilians.
Meanwhile, France, which has taken the most active military role of any foreign power in its former colony since its 2013 intervention, sees MINUSMA as an essential component of a broad coalition of forces currently attempting to root out armed groups.
The forces operating in the Sahel include France’s Operation Barkhane, whose roughly 5,000 troops are largely based in the north and east of the country; the internationally supported G5 Sahel Joint Force, which is mostly composed of troops from neighbouring Sahel countries while operating in the south, centre and east of Mali; a European Union training mission that supports Malian security forces; and the recently approved task force Takuba, an EU special forces initiative set to be operational in the restive tri-border region of Burkina Faso, Mali and Niger by 2021.

Still, insecurity has continued to reign.
Just two days after a virtual UNSC meeting on June 11 to discuss the mandate’s renewal, “unidentified armed assailants” attacked a logistical convoy of the UN mission travelling between the towns of Tessalit and Gao, killing two Egyptian peacekeepers.

Such incidents occur regularly. To date, 209 UN personnel have been killed in the seven-year-old mission.
“That’s the main challenge and that has lots of implications,” Jair van der Lijn, director of the Peace Operations and Conflict Management Programme at the Stockholm International Peace Research Institute (SIPRI), told Al Jazeera.
“The mission becomes more expensive, because you need to have all the protection,” he said. “It means that you are not as close to the population as you would like to be and you’re not able to do the projects in the way that you would like them to be done.”
In the year since the mandate was last extended, in June 2019, MINUSMA was attacked 136 times, according to quarterly reports by the secretary-general. Seventy-one of those attacks, a majority, occurred in the central Mopti region.
Political will
From the Malian government, analysts and observers say the will to end the conflict has fluctuated.
It remains to be seen how recent protests in the capital, Bamako, belying growing unrest with the government that includes its handling of the central crisis, will affect the attitude of officials currently in power.
The large street demonstrations calling for the resignation of President Ibrahim Boubacar Keita, who has been in power since 2013, have been supported by Mahmoud Dicko, a prominent Muslim leader who has long called for dialogue between the government and the armed groups in the central region.

Prior to the recent demonstrations, CSIS’s Devermont wrote in December 2019 that Mali’s political class has appeared more reticent than other leaders in the region to find a solution to the complex crisis, noting that they have not appeared to view the issue as relevant to the 90 percent of their constituents who live in the more hospitable south.
“The politics in Bamako and the southern part of the country are paramount and supersede the troubling developments in northern and central regions,” wrote Devermont. “Not only has the government faced little sustained pressure to address insecurity, but it may believe there is an unacceptable political cost to doing more, particularly because it believes the violence does not pose an existential threat to stability in the country’s south.”
He added: “Mali’s political and business classes may have an incentive to prolong the conflict because they benefit from international financial flows into the country.”
A lack of inclusivity in the government, as well as corruption and allegations that some officials are involved in criminal networks that fund the violence, have all hindered attempts at reconciliation in the centre, despite a political peace-building initiative led by Bamako and supported by MINUSMA.
“The government has its plans for how to deal with the centre of the country. And the best [the UN] basically can do is support any kind of the local mediation that is ongoing and support the parties wherever they are willing to do something,” SIPRI’s van der Lijn said.

“But the challenge for the UN is, you can strengthen governance or you can strengthen the government, but it needs to become more inclusive. And as long as that does not happen, it’s going to be a very difficult process.”
Moreover, the government support of some local militias against others and accusation of abuses and extrajudicial killings by Malian forces have perpetuated deep-seated mistrust and enmity in regions with little government presence otherwise.
MINUSMA’s human rights monitor has documented 119 extrajudicial killings in the first three months of 2020 committed by Malian security forces in the central Mopti and Segou regions, including some by local forces operating under the auspices of the G5 Sahel Joint Force. Most recently, in June, a Fulani association accused the Malian army of massacring dozens of civilians in a village in the Mopti region.
No framework for peace
Going forward, several analysts agree the most fundamental challenge faced by MINUSMA is fulfilling its dual mandates in Mali’s north and centre.
Pivoting away from the north without an increase in funding could jeopardise the substantial gains made there, but resources needed to operate properly in the centre have not materialised, said Flore Berger, a Sahel research analyst at the International Institute for Strategic Studies (IISS).
“They still don’t have, in the Mopti region, military helicopters and ISR aircraft. So even if there is an attack somewhere in Mopti in the central sector, they cannot intervene quickly,” she said. “They don’t have helicopters and it’s the only way to safely move around the region because of IEDs and the presence of armed groups.”
And while the 2015 accord offers a framework, although laden with obstacles, to approach peace with some of the armed groups in the north, there is no such framework for peace in the centre for MINUSMA to support.
“The reason why they have been productive in northern Mali is because there is a peace agreement that they’re trying to implement,” said ICG’s Ibrahim.
“In central Mali, there is no such thing, there is no peace framework that MINUSMA can implement and bring all the actors to respect.”
Continue Reading…

Bill to give Washington, DC statehood gets historic US vote |NationalTribune.com