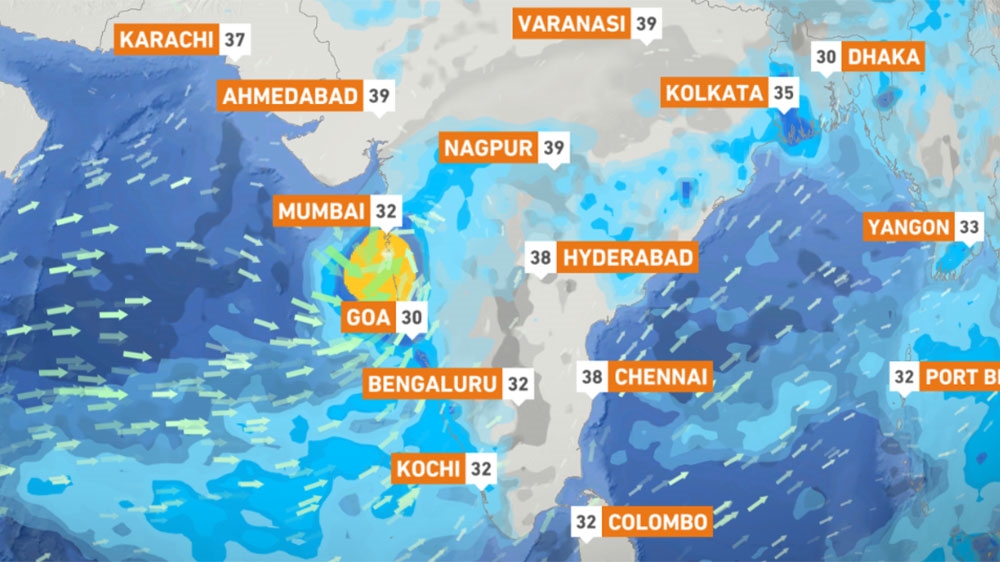 Cyclone Nisarga, which had intensified into a severe cyclone in the Arabian Sea, has begun to make its landfall along the coast in the western Indian state of Maharashtra.
The severe cyclonic storm dropped heavy rains and winds gusting up to 120km (75 miles) per hour on Wednesday afternoon as a category 4 cyclone near the coastal city of Alibagh, about 98km (60 miles) south of Mumbai, India’s meteorological department said.
More:

At least 100,000 people, including some coronavirus patients, were moved to safer locations, according to officials in Mumbai, India’s financial capital and home to more than 18 million people.

Indian media reports said Nisarga is the worst cyclone to hit the region in more than 70 years, raising concerns about readiness in Mumbai and neighbouring areas.
The cyclone also threatens to worsen prospects for an economic turnaround as a nine-week-long government-imposed coronavirus lockdown began to ease this week.
India’s largest container port, Jawaharlal Nehru Port Trust, on the outskirts of Mumbai, was also ordered to shut for 24 hours, the port said in a statement.
Area grappling with pandemic
The storm came as the Indian region grapples with the ongoing coronavirus pandemic.
Maharashtra and Gujarat states have reported about 44 percent of India’s more than 200,000 COVID-19 cases nationwide, and 61 percent of all virus deaths.
The metropolis of Mumbai is already struggling with the highest number of coronavirus cases with more than 41,000 infections.
Local news reports have shown an overwhelmed hospital system in Mumbai, with patients resting on hospital floors until beds become available and bodies left in wards.
Maharashtra Chief Minister, Uddhav Balasheb Thackeray, said on Twitter that residents in Mumbai’s expansive slums had been ordered to evacuate, though it was not immediately clear if shelters had been set up.
He also said some 150 coronavirus patients had been moved out of a hospital near the city’s beachfront.
Extra care is being taken to prevent disruption to the power supply as thousands of patients undergo treatment in hospitals throughout the region, the National Disaster Response Force (NDRF) officials said.
In Maharashtra’s Palghar district, more than 21,000 villagers were being evacuated, local media reported, citing officials.
Rare cyclone
Cyclones often skirt densely populated Mumbai, though every year during torrential rains of the June-September monsoon season roads are submerged, and the suburban railway service that serves millions of people comes to a halt.
But the city has rarely faced the brunt of cyclones – the last severe storm to hit the city struck in 1948, killing 12 people and injuring more than 100.
Nisarga is also expected to hit neighbouring Gujarat state, with nearly 79,000 people to be evacuated from coastal regions by early Wednesday, Gujarat relief commissioner Harshad Patel told reporters.
Patel said 18 districts across the state would experience heavy rainfall and strong winds of up to 110kph (65mph).
“In wake of the coronavirus outbreak, all standard operating procedures are being followed at the temporary shelters which have been sanitised and instructions have been issued on following safe distancing,” Arpit Sagar, an official in Valsad, told the AFP news agency.
The NDRF has mobilised 32 teams, and a total of 1,500 men are ready in the two states to help with evacuations and relief.
Nisarga is the second cyclone to strike India in a little over a week. On May 21, Cyclone Amphan battered the country’s eastern coast including Kolkata, and neighbouring Bangladesh, killing more than 100 people and leaving a trail of destruction.
Although post-monsoon flooding is common in Mumbai in the fall, some experts fear the city is not prepared for the strong winds and storm surges that come with the cyclone.
“There’s been no test of how the city does in a cyclone,” said Adam Sobel, a climate scientist at Columbia University who has studied the risk to Mumbai. “It just makes me nervous.”
Continue Reading…

A powerful cyclone has hit Bangladesh and eastern India killing at least 20 people and destroying thousands of homes, officials said, leaving authorities struggling to mount relief efforts amid a surging coronavirus outbreak. Authorities began surveying the damage on Thursday after millions spent a sleepless night which saw up to 170 kilometre (105 miles) an… 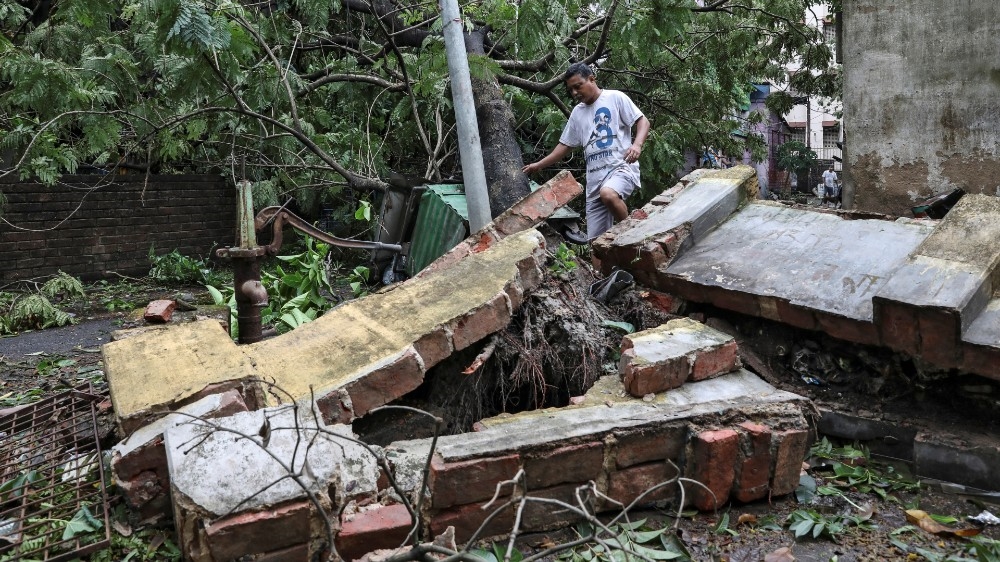 In Pictures: Bangladesh on the front line of climate crisis

Many killed as Cyclone Amphan tears into India, Bangladesh coasts

India, Bangladesh order evacuation of millions ahead of cyclone

Millions across India and Bangladesh were left without power in the wake of the most powerful cyclone to have hit in more than 20 years.
The eastern Indian state of West Bengal took the brunt of Cyclone Amphan. The state’s Chief Minister Mamata Banerjee said at least 12 people had died in the state, and two districts been completely battered.
“Area after area has been devastated. Communications are disrupted,” Banerjee said, adding that the state authorities had not entirely anticipated the ferocity of the storm.

‘Everything is destroyed’
In neighbouring Bangladesh, officials said eight people had died, including a five-year-old boy and a 75-year-old man, hit by falling trees and a cyclone emergency volunteer who drowned.
Bangladesh officials said they were waiting for reports from the Sundarbans, a UNESCO World Heritage Site famed for its mangrove forest and population of endangered Bengal tigers, which bore the brunt of the storm.
“We still haven’t got the actual picture of the damage. We are particularly concerned over some wild animals. They can be washed away during storm surge in high tide,” forest chief Moyeen Uddin Khan told AFP news agency.
The ecologically fragile region straddling the Indian-Bangladesh border is best known for thick mangrove forests that are a critical tiger habitat.
Houses “look like they have been run over by a bulldozer”, said Babul Mondal, 35, a villager on the edge of the Indian side of the Sundarbans, which is home to approximately four million people.
“Everything is destroyed,” he said.
Widespread relief that the evacuation of more than three million people from coastal villages had averted the horrific death tolls of past storms was tempered by fears of the coronavirus pandemic spreading in crowded shelters.
Authorities in both countries sent masks and sanitiser but social distancing was virtually impossible as families packed into reinforced schools, government buildings and community halls.

A man walks over a collapsed wall after Cyclone Amphan made landfall in Kolkata, India [Rupak De Chowdhuri/Reuters]

Kolkata awoke to flooded streets
West Bengal capital Kolkata awoke to flooded streets with some cars window-deep in water. Much of the city of 15 million people was plunged into darkness as transformer stations exploded.
The cyclone weakened as it moved along the Bangladesh coast but still unleashed heavy rains and fierce winds in Cox’s Bazar, the district which houses about one million Rohingya refugees from violence in Myanmar.
The cyclone brought a storm surge – a wall of ocean water that is often one of the main killers in large weather systems – that roared inland.
In southwest Bangladesh, a 1.5 metre (five-feet) surge broke an embankment and swamped farmland, police told AFP.
Cyclones are an annual hazard along the Bay of Bengal coast. Amphan was the first “super cyclone” to form over the Bay of Bengal since 1999.
In 2007 Cyclone Sidr left more than 3,500 dead in Bangladesh.
Bangladesh’s low-lying coast, home to 30 million people, and India’s east are regularly battered by cyclones that have killed hundreds of thousands of people in recent decades.
A 1999 super cyclone left nearly 10,000 dead in India’s Odisha state, eight years after a typhoon, tornadoes and flooding killed 139,000 in Bangladesh.
In 1970, half a million perished in Bangladesh – a nation of 160 million.

2.4 million people and more than half a million livestock were brought to shelters in Bangladesh [Abu Sufian Jewel/AP Photo]

Faster evacuations, better technology
While the frequency and intensity of storms have increased – blamed partly on climate change – casualties have fallen thanks to faster evacuations, better technology and more shelters.
Enamur Rahman, Bangladesh’s junior minister for disaster management, told AFP 2.4 million people and more than half a million livestock were brought to shelters.
India evacuated more than 650,000 in West Bengal and Odisha states.
Because of the coronavirus, authorities used extra shelter space to reduce crowding, while making face masks compulsory and setting aside isolation rooms.
Infection numbers are still soaring in both countries.
Continue Reading…