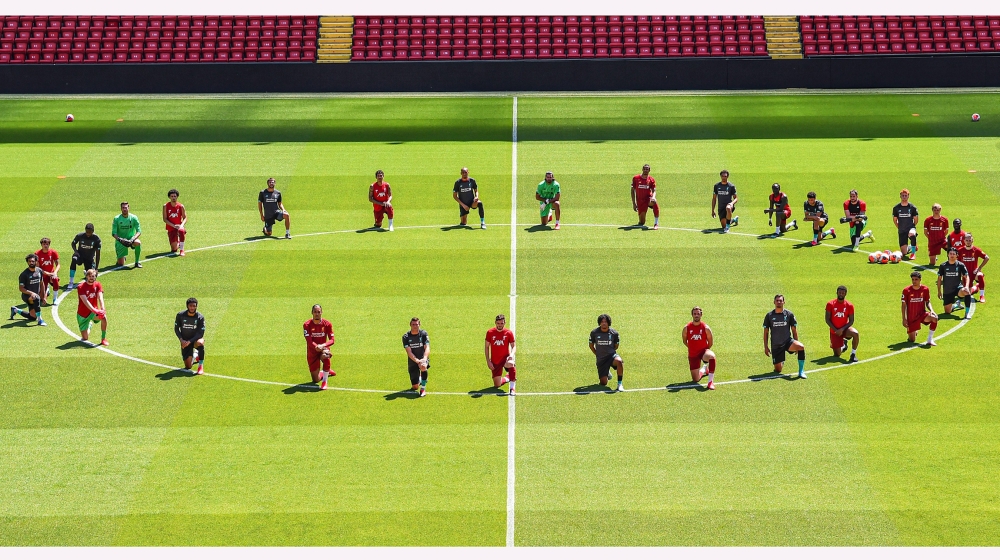 Liverpool football players took a knee around the centre circle at Anfield Stadium on Monday, in a gesture of solidarity as protests swept the United States following the death of George Floyd, an unarmed Black man, in police custody.
Squad members posted a picture of the act on their social media accounts with the caption “Unity is strength #BlackLivesMatter”.
More:

Pressure mounts for US officers to be charged

Black man dies after US police pin him to ground

The move evoked memories of former San Francisco 49ers quarterback Colin Kaepernick kneeling during the US national anthem before NFL games in 2016 to protest against police brutality and racial inequality in the US.
The picture of 29 players from the English Premier League leaders was taken during a training session.
Star players Virgil van Dijk, Trent Alexander-Arnold and captain Jordan Henderson were among those to post the picture that was retweeted by the official account of Liverpool, which is owned by Fenway Sports Group – the US company which also controls the Boston Red Sox.

Floyd died in Minneapolis on May 25 after a white police officer pressed his knee into the Black man’s neck for several minutes – even after Floyd stopped moving and pleading for air.
His death has sparked days of protests across the US and it has resonated in the football world.
Four players took a stand over the weekend in Germany’s Bundesliga, which is the first major football league to resume during the coronavirus pandemic.
On Sunday, Borussia Dortmund players Jadon Sancho and Achraf Hakimi wore shirts with the message “Justice for George Floyd” in a Bundesliga match.
England forward Sancho, who scored the first hat-trick of his career in Dortmund’s 6-1 rout of Paderborn, and the Spanish-born Hakimi, who plays for Morocco, took off their team shirts to display the message.
Borussia Moenchengladbach’s Marcus Thuram knelt to honour Floyd after scoring. US defender Weston McKennie displayed a “Justice for George’ message on his armband in Saturday’s 1-0 home defeat by Werder Bremen.

Anti-discrimination body Kick It Out chairman Sanjay Bhandari said on Monday that all players should take a knee in protest against the death of Floyd.
“If you score a goal and take a knee could everyone do that? Not just the black players, the white players too, everyone. Every player should do it,” Bhandari told the Guardian.
“Racism’s not about black players or brown fans, it’s about all of us. Racism corrodes society and we’re all hurt by it. I would urge all the authorities and all the clubs to show a degree of understanding. This is almost above politics, this is about right and wrong.”
Manchester United and England striker Marcus Rashford, who is Black, also posted a message on Twitter, saying “people are hurting and people need answers”.
“Black lives matter. Black culture matters. Black communities matter. We matter,” Rashford wrote, before adding #justiceforgeorgefloyd.

“At a time I’ve been asking people to come together, work together and be united, we appear to be more divided than ever. People are hurting and people need answers.”
Continue Reading…

Iran calls on US to ‘stop violence’ against its own people |NationalTribune.com