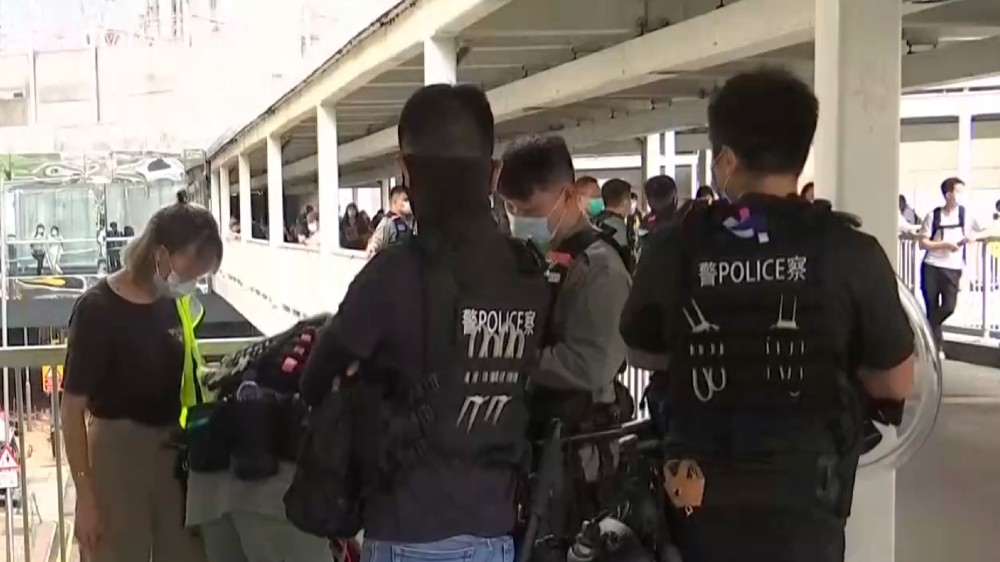 Hong Kong riot police fired pepper pellets to disperse protesters in the heart of the global financial centre on Wednesday, as new national security laws proposed by Beijing revived anti-government demonstrations.
Police also surrounded the Legislative Council where a bill was due to be debated that would criminalise disrespect of the Chinese anthem, amid soaring tensions over perceived threats to the semi-autonomous city’s freedoms.
The bill would also require that the anthem be taught in schools and sung by organisations.
The semi-autonomous Chinese territory is also on edge over China’s plans to impose “national security” legislation on Thursday.
The Legislative Council, known as Legco, is due to start its session at 11am (03:00 GMT). Police have also taken to walkways around the area and are checking passers-by.
Here are the latest updates:
06:50 GMT – Several young protesters in handcuffs paraded by police
Several young protesters wearing masks and in hancuffs were seen paraded by police in Hong Kong.
Members of the media were unable to move closer to the protesters, as they were held back by police cordon.
06:33 GMT – Legco session resumes
Hong Kong’s Legislative Council has resumed its session after a lunch break, to continue discussions on the controversial national anthem bill.
During the afternoon session, Legco President Andrew Leung rejected a bid to move an adjournment debate.
Meanwhile, the Secretary for Constitutional and Mainland Affairs Erick Tsang told reporters that he does not think the new legislation “will have any influence on our freedoms,”  as he defended the proposed national security law and anthem law.
06:23 GMT – Taiwan to form special body to handle Hong Kong issue
Taiwan’s President Tsai Ing-wen announced in a press conference on Wednesday that she will form a special group to tackle the Hong Kong issue.
The body, under the Executive Yuan, will handle matters including people arriving from Hong Kong to settle in Taiwan.
06:10 GMT – Hong Kong: Why China’s national anthem bill is so controversial
Hong Kong deployed riot police around the Legislative Council on Wednesday as activists called for protests against a bill to criminalise disrespect of the Chinese anthem, amid soaring tensions over perceived threats to the city’s freedoms.
The second reading of the bill is being held on Wednesday.
This article further explains why the national anthem bill is controversial.
05: 35 GMT – Riot police fire pepper pellets to disperse protesters

Riot police disperse anti-government protesters during a lunch time protest in Central Government Complex as a second reading of a controversial national anthem law takes place in Hong Kong on Wednesday.
Reuters news agency is reporting that the Hong Kong police fired pepper pellets to break up the protests.

05:13 GMT – Expert says Hong Kong crackdown inevitable
Since the anti-government protests in Hong Kong last year, it was just a matter of time before Bejing responds and carry out a crackdown against the opposition and civilians, an expert from Lowy Institute said.
Ben Bland, director of the Southeast Asia Program at the Australia-based think tank, said the ongong coronavirus pandemic is a “fortuitous timing” for China to impose the national security law, when the attention of other countries are also focused on containing the deadly disease, and when Hong Kong residents are also constrained in carrying out protests.
“The proposed national security legislation is a huge blow to Hong Kong’s way of life. It is a blow to the pro-democracy movement, and even to the business community,” he told Al Jazeera.
04:48 GMT – Billionaire Li Ka Shing backs national security bill
Hong Kong’s billionaire Li Ka-shing has expressed his support for the controversial national security law, which China is expected to approve on Thursday.
The pro-Beijing publications Ta Kung Pao and Wen Wei Po quoted Li as saying that the law will help in the long-term stability and prosperity of the city, even as he also called on the Hong Kong government to strengthen people’s confidence on the One Country, Two Systems policy.
04:18 GMT – 16 people arrested in Hong Kong
Hong Kong police said in a statement on Wednesday that at least 16 people have so far been arrested today for carrying out “illegal” activities across the city – a Special Administrative Region of China.
Those who were arrested were aged between 14 to 40, according to the statement posted on social media.
03:40 GMT – Heavy security reported outside Legco
Hong Kong police have been deployed around Hong Kong government’s headquarters and Legislative Council on Wednesday, as legislators hold their latest session to discuss a proposed law imposing criminal punishment against those who “disrespect” China’s national anthem and flag.
Police reportedly blocked a footbridge leading to the Central Government Complex, leaving only one footbridge for public access.

Extremely heavy police presence around the govt hq and Legco. Police have blocked access to a footbridge to the CGO, and leave only one footbridge open for public access pic.twitter.com/fOJyHeC0No
— Timmy Sung 🎙 (@timmysung) May 26, 2020

02:45 GMT – Legco session due to start at 11am (03G) with questions
The Legco session is due to get underway shortly and will start with various adminstration officials responding to legislators’ questions.
Given the current tensions in Hong Kong, a couple of the six questions slated for oral reply stand out. Question two is for the Secretary for Security and relates to “preventing the emergency of homegrown terrorism”.  Question six relates to Article 23 of the Basic Law, which covers national security.
02:00 GMT – Five youngsters arrested with petrol bombs, helmets, gas masks
AFP is reporting that the police have arrested five under-18s in three different areas around the city. One group had molotov cocktails, another a screwdriver and the others helmets and gas masks. The youngest is just 14.

So far this morning 5 boys aged between 14 and 18 have been arrested in Sham Shui Po, Kwai Chung and Tsuen Wan. Police said they found Molotovs on the pair in SSP, a screwdriver on the one in KC, and helmets and gas masks on the two students in TW. Pics from police FB page. pic.twitter.com/ys6onzeagU
— Xinqi Su 蘇昕琪 (@XinqiSu) May 27, 2020

00:30 GMT – Trump warns US to have “strong response” to China security legislation
US President Donald Trump says the US will announce its response to China’s plan to impose national security legislation on Hong Kong by the end of this week.
When asked whether the response would include sanctions, Trump responded: “No, it’s something you’re going to be hearing about … before the end of the week, very powerfully, I think.”
You can read more on Trump’s comments and US reaction to China’s recent moves in Hong Kong here.
00:00 GMT – Hundreds of riot police surround Legco
Hundreds of riot police have been deployed around the Legco building, which has been sealed off behind a wall of blue and white water-filled plastic barriers, according to Reuters.

‘I can’t breathe’: Black US man dies after officer pins him down |NationalTribune.com