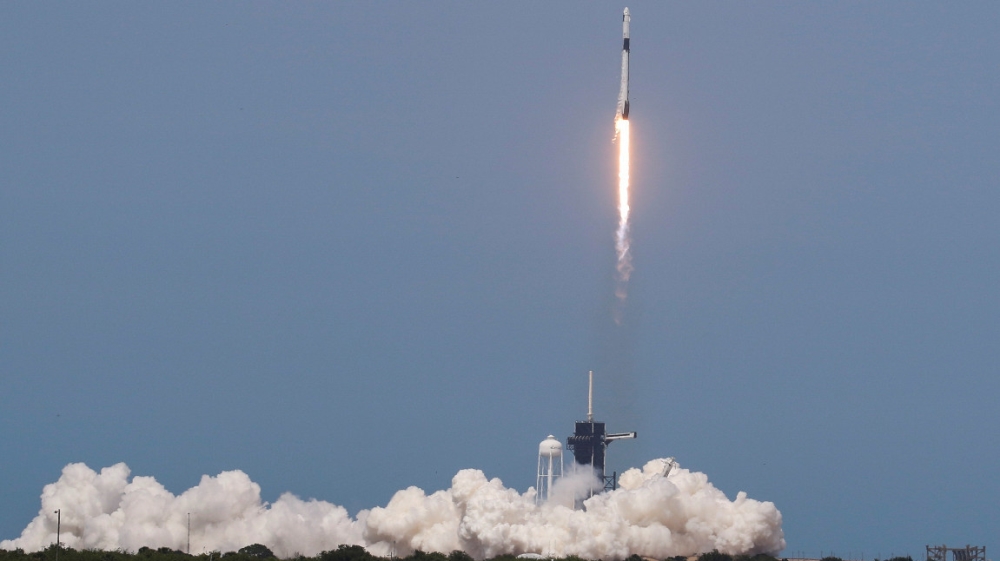 Billionaire entrepreneur Elon Musk’s rocket company SpaceX launched two NASA astronauts into space Saturday afternoon at 3:22pm (19:22 GMT), making the company the first commercial entity ever to achieve such a feat.
“This has been along time coming,” said NASA Administrator, Jim Bridenstine “It’s been nine years since we’ve launched American astronauts, on American rockets, from American soil. And now it’s done. We have done it. It’s been way too long.”
The Saturday launch was a few days late. On Wednesday, weather, specifically the threat of lightning, forced the SpaceX and NASA teams to scrub the original launch date.
More:

Iran satellite launch ‘sends a message’ on failed US pressure

The mission, called Demo-2, is much more than the beginning of an end-to-end crewed test flight. When the Crew Dragon capsule atop a Falcon-9 rocket blasted off from the Kennedy Space Center’s launchpad 39A, in Florida, it took the United States into a new commercial era of human spaceflight.
“This is the future. Commercial spaceflight,” said Bob Cabana, the space centre’s, and former NASA astronaut.
“We want to establish a commercial environment in low Earth orbit so that we can focus on the hard job of exploring beyond our home planet. To establish that presence in our solar system beyond planet Earth. Establish a sustained presence on the moon. Get to Mars. Establish a presence there.
“We can’t do that if we are locked here in low Earth orbit. And Commercial Crew with both SpaceX and Boeing, that’s the beginning of a whole new era of spaceflight,” Cabana said.
If SpaceX is successful, Demo-2 will pave the way for NASA to certify the company’s Crew Dragon – Falcon-9 space transportation system for human spaceflight to and from the International Space Station (ISS) and other low Earth orbit destinations.
That certification will also mark the first complete success of the space agency’s Commercial Crew programme, which includes Boeing Co.
The Demo-2 test
The Demo-2 mission is an end-to-end test that begins with liftoff, includes docking with the ISS, and then finishes with return-to-Earth splashdown in the Atlantic Ocean, off Florida’s eastern coast.
Some 12 minutes after liftoff, the Crew Dragon inserted NASA astronauts Bob Behnken and Doug Hurley reached their initial orbit. In the following 19 hours, the astronauts will test the Crew Dragon’s environmental control and life support systems; the manoeuvring thrusters; thermal control systems; and the mattress quality of their chairs.
“The biggest thing that we need the astronauts to do once they get on orbit and before they dock, is rest. We need them to eat. We need them to rest. We need them to be prepared for that docking”, said Jim Bridenstine, NASA’s administrator.
“Once they are in range of the International Space Station, they’re going to start manoeuvring the spacecraft themselves. Not automatic, but they are going to do it themselves. They are, in fact, test pilots. And as test pilots, they will test-fly this vehicle to make sure it operates as advertised,” he said.
Behnken and Hurley are scheduled to dock the Crew Dragon with the ISS on Sunday morning at 15:29 GMT. They are expected to stay on the ISS anywhere from six weeks to three months before returning to Florida and completing the Demo-2 test mission.
The new commercial era
It is nothing new to read that NASA’s budgets have long been under pressure to bring down the costs of running the ISS, including the price tag associated with transportation. What is new is how NASA intends to shrink the cost of launch through its Commercial Crew programme.
Conceived some 15 years ago, the Commercial Crew programme’s intent has been to incentivise the private sector into developing a commercially viable cargo and crew launch service, that would reduce NASA’s costs.

Since the Space Shuttle was retired in 2011, NASA and the European Space Agency have shelled out enormous sums of taxpayer monies to their send astronauts to the ISS on board Russia’s Soyuz launch system, because the Soyuz was literally the only option – a seller’s market.
According to NASA’s Office of the Inspector General (OIG) published last November, NASA paid Russia’s space agency, Roscosmos, an average of $85.4m per seat. Since 2017, the US has shelled out more than $1bn for the Soyuz seats.
‘Orbit is hard’
The year 2017 is notable, because despite NASA having spent money, effort and political capital to support its Commercial Crew program, Space X and its competitor Boeing Co, missed that year’s aspirational deadline to start commercial human transportation services to and from the ISS.
But as Musk tweeted, in response to Virgin Orbit’s failed attempt to send a spacecraft into orbit on Monday, “Sorry to hear that. Orbit is hard. Took us four attempts with Falcon 1.”
Plus, SpaceX suffered a serious setback on April 20, 2019, when an anomaly occurred during a static fire test, causing an explosion that destroyed the Crew Dragon capsule.
Boeing Co, which hopes to soon join SpaceX in providing commercial human transportation services, is currently readying itself to re-do its orbital flight test. In December, a series of software glitches forced Boeing Co to bring its Starliner capsule back to a safe landing on Earth, but only after failing a key test – docking with the ISS.
The NASA OIG also reported the Commercial Crew contracts were worth $6.8bn, with Boeing accounting for $4.3bn, and its competitor SpaceX garnering roughly $2.5bn.
The cost of a ticket to ride
NASA astronaut Tom Marshburn, speaking from NASA’s Johnson Space Center in Texas, underscored the paradigm. “Our astronauts are thrilled to be taking a new spacecraft into orbit. This will be the new first for us, flying to space on a commercial vehicle,” he said.
While Starliner is still working out the issues, SpaceX intends to not only take professional astronauts up to the ISS, but has started to book tourists, as well. Axiom Space has reportedly started selling Crew Dragon seats and a 10-day stay on board the ISS, with a blast-off date in the second half of 2021.
NASA astronaut Christina Koch, who recently spent 328 days in space, setting the record for the longest single spaceflight by a woman, said, “Bringing in the private sector bringing in a commercial space economy from low Earth orbit, it means space is going to be accessible and more innovative. And it’s just an awesome new era history to be able to witness.”
The estimated price for a Crew Dragon seat is roughly $55m, while a seat on Starliner is thought to be about $90m.
Continue Reading…