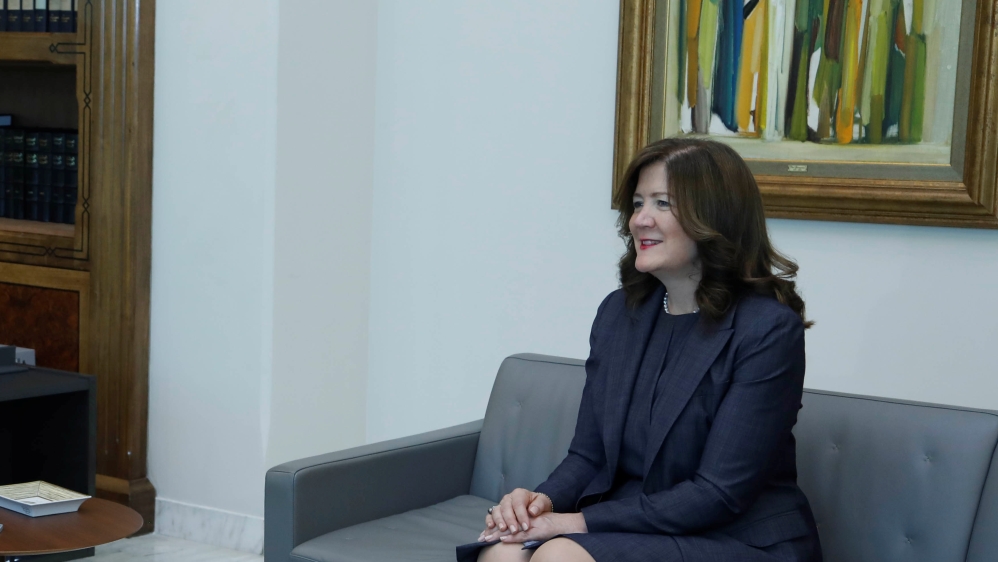 Beirut, Lebanon – A number of Lebanese media outlets broadcast interviews with US Ambassador Dorothy Shea on Sunday, ignoring a ruling by a judge which banned local and foreign media from featuring her statements after she criticised Iran-backed Hezbollah in an interview last week.
Urgent Matters Judge Mohammad Mazeh – who is based in the southern city of Tyre, a stronghold of Hezbollah and its main ally the Amal Movement – said on Saturday that media channels who violate the decision could be closed down for a year and fined $200,000.
He said Shea had interfered in Lebanese internal affairs and violated the Vienna Convention that gives special privileges and immunity to diplomats. Her words “offended many Lebanese”, pitted them against each other and “constitutes pouring oil on the fire of [sectarian] strife”, he said.
In an interview on Saudi-owned al Hadath TV last week, Shea said: “Hezbollah is destabilising the country and jeopardizing Lebanon’s economic recovery.”
She also said a recent speech by Hezbollah leader Hassan Nasrallah was “riddled with classic deflections – blaming everything on the United States when we’re Lebanon’s biggest donor”.

Nasrallah on June 16 alleged that a US conspiracy to prevent dollars from reaching Lebanon was behind a dollar shortage that has led the national currency to rapidly depreciate.
He said the US was attempting to starve Lebanon but said Hezbollah would not let that happen and “we will kill them”.
Hezbollah’s growing influence in Lebanon and the region as a powerful group has strained Lebanon’s ties with historical allies in the West and especially among Arab Gulf nations who used to supply the lions share of tourists to the country and gave it billions in aid.
Lebanon’s deep economic and financial crisis has its roots in decades of mismanagement and corruption, while a lack of political will to reform has stalled relations with donor nations. But uneasiness and anger over Hezbollah’s outsized role are of growing concern.
Germany last month became the latest Western nation to designate Hezbollah a “terrorist” group, after the United Kingdom did so earlier this year, taking the lead from the US which has ramped up sanctions on those who aid and abet Hezbollah since US President Donald Trump took office.
‘Attempt to silence’
A number of Lebanese media channels ignored Mazeh’s ruling and broadcast interviews with Shea on Sunday in which she doubled-down on criticism of Hezbollah.
“The attempt to silence Lebanese media in a country that is really known for having free media is really pathetic, it doesn’t belong in Lebanon. That kind of action belongs in a country like Iran,” she said in an interview with MTV news channel.

Contacted by Al Jazeera, Mazeh said the ruling would not go into effect until Tuesday and it would be up to private citizens to file complaints of violations. “I’ve done my part, it’s not my job to go after every violation of this ruling,” he said.
He also said he could reverse the decision if Shea promises not to make statements that “pit Lebanese against each other”.
Mazeh denied the ruling was a result of pressure from Hezbollah. “I swear to god that no one from Hezbollah called me about this issue at all, and in the case, someone called I would not do anything unless I myself was convinced of such a decision.”
Backlash
Mazeh’s decision has faced backlash from opposition parties and even the information minister of Prime Minister Hassan Diab’s Hezbollah-backed government, Manale Abdelsamad, who said it infringed on media freedom and was “unacceptable”.
But Abdelsamad on Saturday said she was not speaking on behalf of the government and that no officials had apologised to Shea because the government respects the judiciary.
“Unfortunately I think the minister of information doesn’t have all the information,” Shea responded in the MTV interview on Sunday. “A very high-ranking and well-placed official in the Lebanese government … expressed apologies and conveyed that this ruling did not have proper standing and that the government would take the necessary steps to reverse it.”

There are no signs of that yet. Mazeh denied reports he had been referred for investigation and said he would resign if such a decision were made.
And Mazeh has powerful backers. Hezbollah has thrown its support fully behind his ruling.
Member of Parliament Hasan Fadlallah, a prominent member of the group’s parliamentary bloc, said Shea’s statements constituted a “blatant attack on the sovereignty and national dignity” of Lebanon and a “miserable attempt to cover up the conspiratorial role of [the US] administration on the livelihood of the Lebanese people and their national currency”.
Fadlallah called on the foreign minister to summon Shea over her comments.
Following Fadlallah’s statement, state media reported Foreign Minister Nassif Hitti summoned the ambassador “over recent statements” and would meet with her on Monday.

Crackdown on Hezbollah critics
The ban on coverage of Shea is the most prominent episode in a string of recent cases against those critical of the government and the president, both backed by Hezbollah, and Hezbollah itself.
“Saying that there is a troubling trend would be too little. I would say freedom of expression is in a critical, dangerous situation and even at vital risk in Lebanon,” Ayman Mhanna, the executive director of the Samir Kassir Foundation, a media freedom watchdog, told Al Jazeera.
“The problem is the politicization of justice, the fact that judges either follow direct orders or the political whims of parties by trying to please the political players who were responsible for naming, appointing or promoting judges,” he said.

“Now that Hezbollah is the most powerful player they rule in favour of Hezbollah,” he said.
On June 22, Lebanon’s Military Court charged online activist Kinda el-Khatib with collaborating with Israel and allegedly visiting occupied territories, both of which are crimes in Lebanon, a country that is still technically at war with Israel.
El-Khatib is a harsh critic of Hezbollah, and her family maintains her innocence on all charges.
The next day, state media reported a judge had filed charges against anti-Hezbollah preacher Sayyed Ali al-Amin for allegedly meeting Israeli officials in Bahrain.
Following a widespread backlash, state media issued a correction and said the charges were related to civil peace in the country, rather than collaborating with Israel.
And General Security on June 25 interrogated former Hezbollah fighter-turned anti-Hezbollah activist Rabih Tlais for reasons that remain unknown to him.
“There was the atmosphere of fabricating a file against me on charges of collaborating [with Israel],” he told Al Jazeera.
Tlais said he had decided to stop writing for A New Lebanon, a news website run by an anti-Hezbollah preacher Abbas al-Jawhari, due to fears “they are trying to get to Jawhari through me, which I won’t let happen”.
Jawhari ran against Hezbollah in the parliamentary elections in 2018 and was himself arrested in the lead-up to the elections on drug charges he has said were fabricated.
“It’s very regrettable,” Tlais said. “Welcome to the Republic of Iran.”
Continue Reading…

Sweden ambassador: Stockholm could reach herd immunity by May

Sweden’s ambassador to the United States has said the capital of the Nordic country could reach herd immunity by May – a result of a controversial response to the coronavirus pandemic involving few public restrictions. “About 30 percent of people in Stockholm have reached a level of immunity,” Karin Ulrika Olofsdotter told National Public Radio… 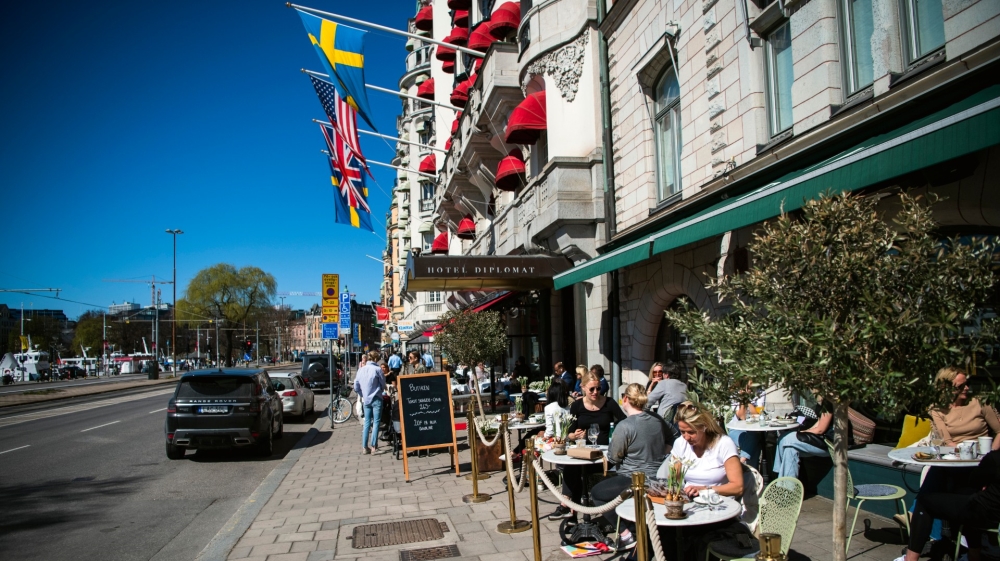 Sweden’s ambassador to the United States has said the capital of the Nordic country could reach herd immunity by May – a result of a controversial response to the coronavirus pandemic involving few public restrictions.
“About 30 percent of people in Stockholm have reached a level of immunity,” Karin Ulrika Olofsdotter told National Public Radio (NPR).
More:

To date, close to three million people have been infected by the new coronavirus, which has caused more than 206,000 deaths worldwide.
“We could reach herd immunity in the capital as early as next month,” Olofsdotter said in the interview published on Saturday.
So-called herd immunity occurs when a large enough percentage of a population becomes immune to a virus, either through infection or vaccination, thus preventing further spread throughout the group.
While that percentage changes based on the pathogen, the United Kingdom’s chief scientific adviser has said models indicate about 60 percent of a given community would need to be immune to reach herd immunity for the new coronavirus, SARS-CoV-2.
However, questions remain how immune a recently recovered coronavirus patient actually is, and how long that immunity lasts. The World Health Organization (WHO) has warned against governments issuing so-called “immunity passports” to those who have recovered from the disease caused by the coronavirus, COVID-19, in light of the unsettled science.

South Korea reported recently 222 patients of COVID-19 have again tested positive after being told they were clear of the virus. Authorities there are working to determine if the tests failed to recognise the virus was still present in those patients, or if the individuals were indeed reinfected.
In the interview with the NPR, Olofsdotter agreed that more research and testing are needed to answer the questions surrounding immunity, adding the Swedish government is ready to change its strategy should the situation require it. There are currently no plans to switch course, she said.
Controversial approach
While countries throughout Europe, including neighbours Denmark and Norway, have imposed strict lockdowns that have largely disrupted normal life, Sweden has been far more hands-off in its response to the pandemic.
Epidemiologist Anders Tegnell, who is leading the country’s response, has said the chosen approach stresses long-term sustainability over drastic short-term tactics.
Schools, restaurants and malls have remained open, while the government has issued social distancing guidelines, banned gatherings of more than 50 people, moved most high school and university teaching online and advised residents not to take unnecessary trips.
The government has also warned that restrictions would increase if residents did not follow social distancing, and said it would shut restaurants and bars not following the guidelines.

But critics have said the policy is causing unneeded deaths. More than 18,600 people have been infected in the country of about 10 million, and nearly 2,200 have died.
Neighbouring Denmark, with a population of nearly six million, has seen more than 8,700 cases with at least 400 deaths, while Norway, with a population of 5.3 million, has reported 7,500 infections and just over 200 deaths.
In March, 2,300 academics signed an open letter to the government of Sweden, calling for tougher measures to protect the healthcare system.
Olofsdotter, in the NPR interview, said Sweden’s approach best suited the needs of the country, adding it would eventually help Sweden’s economy recover faster than others once the pandemic is under control.
“We share the same goal as all other countries, and that is of course to save as many lives as possible and protect public health,” she said. “So we face the same reality as everyone else. But what’s different, and I think it’s important to underline that all countries are different, is that politicians take the measures that they think works best for their country and their general public.”
Continue Reading…