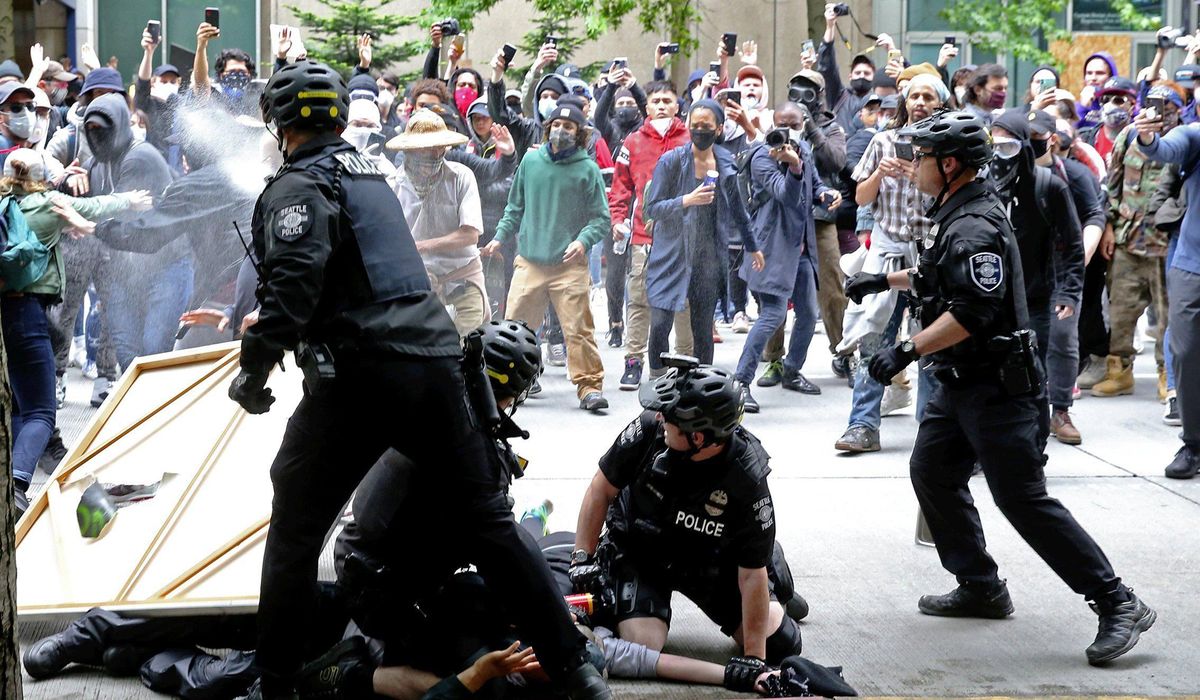 The fallout over the killing of George Floyd continued on Monday, with leaders around the country taking various steps to respond amid national protests, some of which have led to fatalities, injuries and property damage.

The protests came after Floyd, a black man, died in police custody on Memorial Day after a Minneapolis police officer knelt on his neck for nearly 9 minutes.The former officer, Derek Chauvin, was charged on Friday with third-degree murder and manslaughter. The other three officers at the scene have also been fired and could face charges.

• Minnesota Gov. Tim Walz said curfews for Minneapolis and St. Paul would be extended for two more nights, but he narrowed the time frame from 10 p.m. to 4 a.m. The previous curfews had been from 8 p.m. to 6 a.m.

Mr. Walz also said many members of the Minnesota National Guard could be going back home after he had authorized their deployment over the weekend.The state had activated about 7,000 members of the National Guard as part of its response. Major Gen. John Jensen said some troops could remain at the ready should they be needed.

• Minnesota Attorney General Keith Ellison, who is taking the lead on the Floyd case, said officials were weighing evidence in the case against Mr. Chauvin amid some public calls for officials to file first-degree murder charges.

On potential charges for the three other officers on the scene, Mr. Ellison said they’re still reviewing the body of evidence.

“We have to make sure that we look at the facts and the law, and we will charge those cases, those individuals to the highest degree of accountability that the law and the facts will support,” he said on MSNBC.

• President Trump told governors they must “dominate” rioters in their states or “you’re going to look like a bunch of jerks.”

The White House has played down the idea of Mr. Trump’s addressing the country via a televised address, saying an Oval Office speech isn’t going to stop Antifa, the far-left antifascist street group Mr. Trump has fingered as a lead agitator.

• The Justice Department is deploying riot teams to locations like Washington, D.C., and Miami as part of the federal government’s response to the protests, according to a report in USA Today.

• D.C. Mayor Muriel Bowser announced a curfew across the District for the next two nights. The curfew will be in effect from 7 p.m.-6 a.m. starting Monday evening.

“People are torn because they feel so sad and angry about the killing of George Floyd, but also they don’t want their city torn up, so that’s what we’re managing,” the mayor said.

• New York Mayor Bill de Blasio said NYC was weighing a similar citywide curfew, which many other localities across the country have imposed even as they’ve been ignored by many protesters.NYPD Commissioner Dermot Shea had been skeptical a curfew would have its intended effect.

“The problem is: People need to listen to a curfew, and that’s not going to happen. If people think it will, they don’t understand what’s going on,” Mr. Shea said on NBC’s “Today” program.

“Hate just hides,” Mr. Biden said as he met with black leaders at a church in Delaware.

“It doesn’t go away, and when you have somebody in power who breathes oxygen into the hate under the rocks, it comes out from under the rocks.”“It matters what presidents say,” Mr. Biden said.

“The violence that others exploited [in] this moment — we all know it’s never an answer,” Mr. Garcetti said.

• Former President Barack Obama penned an opinion piece in which he decried a “small minority of folks” who have resorted to violence, saying they’re putting innocent people in danger.

“If, going forward, we can channel our justifiable anger into peaceful, sustained, and effective action, then this moment can be a real turning point in our nation’s long journey to live up to our highest ideals,” Mr. Obama said.

• A Florida police officer was suspended after video showed he pushed a kneeling woman to the ground during a protest.

Fort Lauderdale Police Chief Rick Maglione said that Officer Steven Poherence was trying to come to the assistance of a colleague and pushed the women to the ground as officers were helping some of their colleagues.

“If local law enforcement is overwhelmed, let’s see how these anarchists respond when the 101st Airborne is on the other side of the street,” Mr. Cotton said on Fox News.

The law was last invoked in 1992 when the California governor had requested the military respond to riots in Los Angeles.

• Some gun shops have reported an uptick in sales and interest since the Memorial Day weekend and as the ensuing protests take hold.

Joe Hawk, owner of Guns & Roses in New Jersey, said they were already dealing with a surge in demand amid the coronavirus pandemic.

“Almost, you couldn’t even keep up with it — that’s how crazy it was,” he said. “After Memorial Day, it spiked again — it just went crazy again.”

• This story is based in part on wire service reports.