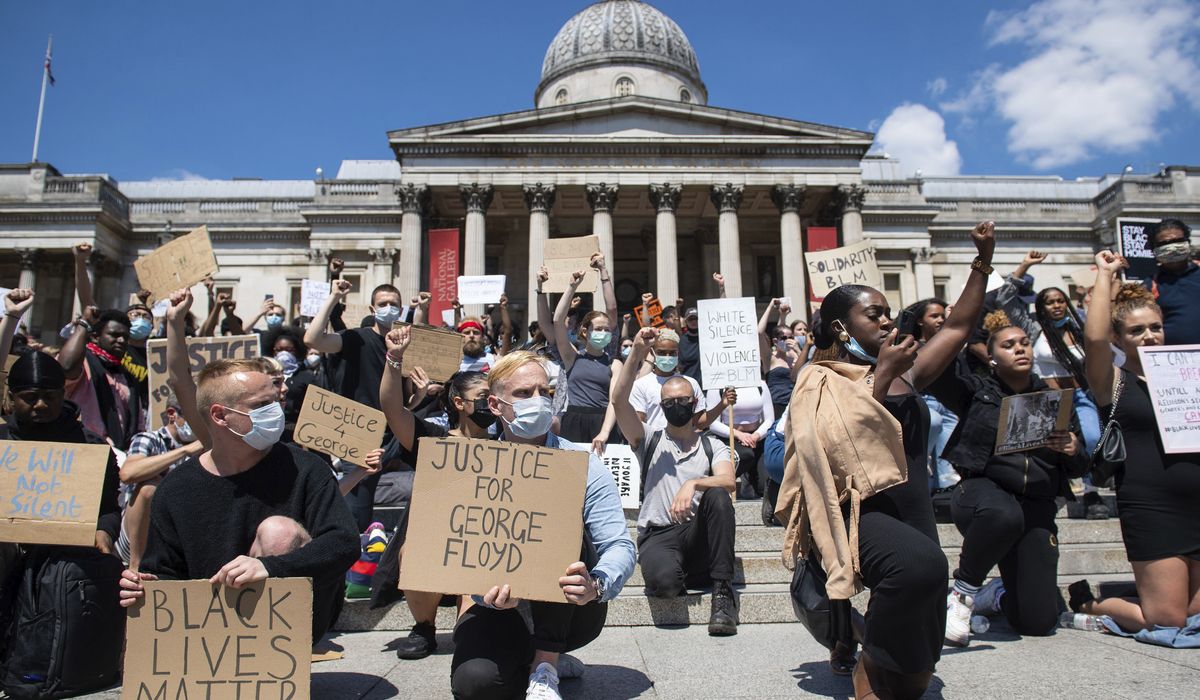 The Trump administration’s struggles to get control of violent nationwide protests has sparked comment and criticism from even some of America’s staunchest allies, potentially driving a wedge between the U.S. and its partners as demonstrations spread around the globe and the U.S. seems paralyzed by an onset of crises.

A week after George Floyd died during a confrontation with Minnesota police, the racially charged firestorm has taken hold in all corners of the world.

America’s main adversaries seem to be taking delight in the unrest. China and Iran are openly mocking the U.S. and claiming that the nation’s deep-rooted racism and ineffective political system have led to an inevitable reckoning.

Even more striking has been the criticism from friends and traditional allies. Officials in Britain and Germany took subtle swipes at American leaders Monday, and leading newspapers in Australia declared that the U.S. is “tearing itself apart” and that the American political system has failed spectacularly.

Top British officials publicly called on the U.S. to cease all harassment of journalists trying to cover the growing protests. British photographer Adam Gray reportedly was arrested in New York City on Sunday while covering the demonstrations.

“The reporter’s arrest and incident are very concerning. Journalists around the world must be free to do their job and hold power to account without fear of arrest or violence,” a spokesman for British Prime Minister Boris Johnson told Business Insider. “It’s the consistent position of the U.K. that journalists must be able to do their jobs without fear of arrest or violence.”

In Germany, top officials seemed to mock President Trump’s plan to declare the group Antifa as a terrorist organization. The far-left group, which considers itself “anti-fascist,” has been responsible for some of the violence across major U.S. cities in recent days, the president has said.

Germany’s center-left Social Democratic Party, a junior partner in Chancellor Angela Merkel’s governing coalition, described itself on Twitter as “157 (years old) and Antifa. Naturally.” The tweet refers to the country’s strong stand against all fascist and neo-Nazi elements in the post-World War II era.

The European Union issued a statement with language aimed at Washington that is more typically reserved for autocratic nations in the developing world.

The EU said it hoped “all the issues” related to the protests in the U.S. “will be settled swiftly and in full respect for the rule of law and human rights.”

Overseas press coverage, even in friendly capitals, has been particularly harsh.

Sydney Morning Herald political editor Peter Hartcher argued in a Monday column that the U.S. is forfeiting the moral high ground to China and other competitors because it has failed to address festering problems.

“The U.S. is tearing itself apart,” he wrote. “America’s problems are not intrinsic to liberal democracy. They are American failures. … The U.S. today is in such a poor state because its biggest problems never get solved — they just accumulate.”

Amid such criticism, the U.S. is racing to head off other potential headaches around the world, some self-inflicted. In Zimbabwe, government officials summoned the U.S. ambassador Monday to explain comments from White House National Security Adviser Robert O’Brien a day earlier. Mr. O’Brien told ABC News on Sunday that Zimbabwe is one of several nations using social media to stoke discord in the U.S.

Officials in Zimbabwe rejected the allegation.

“We prefer having friends and allies to having unhelpful adversity with any other nation, including the USA,” said Nick Mangwana, a spokesman for the Zimbabwean government.

Meanwhile, large-scale protests in support of Mr. Floyd have erupted across Europe and even as far as New Zealand. Major demonstrations haven’t broken out in Africa, but U.S. embassies on the continent seem to be taking proactive approaches to tamp down brewing anger.

“We are deeply troubled by the death of Mr. George Floyd in Minneapolis,” the U.S. Embassy in Nairobi, Kenya, said in a Twitter message over the weekend. “The U.S. Department of Justice is conducting a full criminal investigation as a top priority. Law enforcement officials must be held accountable in every country.”

For America’s chief adversaries, the increasingly violent protests have offered a golden opportunity to twist a knife into the U.S. at its most vulnerable moment.

No country has been more overt in its attacks than China, which seems to view the volatile situation as a chance to exact payback after the White House pinned much of the blame on Beijing for the global COVID-19 pandemic and has launched a global campaign criticizing Beijing’s crackdown on pro-democracy movements in Hong Kong.

State-sponsored media outlets in China have piled on in recent days and alleged that Mr. Floyd’s death and the subsequent chaos should prove that Washington is wrong to view Beijing as the enemy and should instead look within.

“In pursuing an all-embracing vilification of China, the White House and its supporters are deceiving the public as to not only what America’s true problems are, but what they always have been — that is that the United States is a deeply unequal and divided country with staggering levels of wealth inequality, structural racism and underwhelming poverty unprecedented within the developed world,” reads a piece published Monday by the China Global Television Network. “The violent unrest stemming from Floyd’s killing is a marked demonstration of these issues, illustrating the frustration and despair felt by many in the country.”

Top administration officials sought to keep the focus on China’s human rights abuses, including its harsh crackdowns in Hong Kong.

“These are the kinds of actions that authoritarian regimes take, and they have a real impact not only on the Chinese people there in China and Hong Kongers in Hong Kong, but a real impact on people all around the world,” Secretary of State Mike Pompeo said on a podcast hosted by the American Enterprise Institute. “And the United States has a responsibility and the capability to push back against that, ensure that the American people are properly served by a foreign policy that recognizes the threats that emanate from China today.”

Chinese officials have also gleefully pointed to what they say are contradictions in Washington’s lectures on tolerating protests in Hong Kong while trying to control unruly crowds in the U.S.

On Chinese social media sites, the phrase “Bunker Boy” was trending. It was a mocking reference to Mr. Trump’s refusal to meet with demonstrators outside the White House after the administration urged Chinese President Xi Jinping to talk personally with Hong Kong’s protesters.

Mr. Pompeo has had to directly confront other American adversaries seeking to capitalize on the problems gripping the U.S.

Iranian Foreign Minister Javad Zarif, a frequent thorn in the side of the administration who routinely blasts Mr. Pompeo and Mr. Trump on social media, took to Twitter over the weekend to accuse the U.S. of oppressing minorities.

“Some don’t think #BlackLivesMatter,” he tweeted. “To those of us who do: it is long overdue for the entire world to wage war against racism. Time for a #WorldAgainstRacism.”

U.S. leaders also have targeted Russia for promoting violence and unrest. Former White House National Security Adviser Susan E. Rice said Sunday that foreign actors are pushing violence and that the incendiary rhetoric across social media is “right out of the Russian playbook.”

The accusations led to a harsh response from Moscow. Officials echoed their Chinese and Iranian counterparts in claiming the U.S. is ignoring its own problems.

“The United States has certainly accumulated systemic human rights problems: race, ethnic and religious discrimination, police brutality, bias of justice, crowded prisons, and uncontrolled use of firearms and self-defense weapons by individuals, to name a few,” the Russian Foreign Ministry said in a statement.

“We are urging the U.S. authorities to take effective measures to improve the current state of affairs” and honor international commitments.