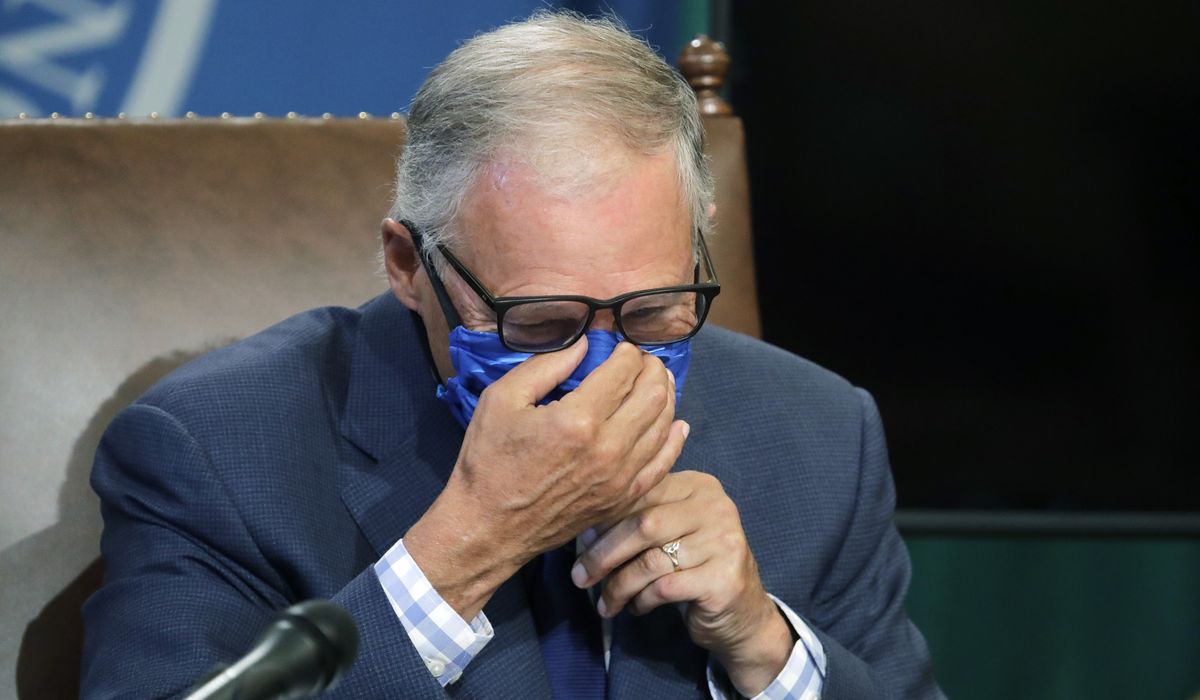 Washington joined several states Tuesday in instituting a statewide mask mandate amid an uptick in positive coronavirus cases, saying facial coverings are crucial in slowing the spread of the virus.

“I think of these face coverings, in some sense, as a statement,” Mr. Inslee said at a press conference, People reported. “It’s a statement that when you wear it, it means you care about people, because it means you want to reduce the risk that you are going to infect another person.”

“Willful violation of this order is tantamount to a misdemeanor,” he said.

Individuals who are exempt from the order include children younger than 5 and those who are deaf or hard of hearing.

The move came after Yakima County, located just southeast of Seattle, reported a massive shortage in both intensive care and non-intensive care beds.

“The health care system, because of COVID-19 infections, is so stressed, that there is no room at the hospital in Yakima County. There are no rooms available to people for this treatment in Yakima County,” the governor said, CBS News reported. “That means that patients are having to be shipped by ambulance outside of Yakima County to Seattle and other places. … We do not want to see that condition spread across the state of Washington.”

New York Governor Andrew Cuomo signed into law on Friday a sweeping package of police accountability measures, including one allowing the release of officers’ long-withheld disciplinary records, that received new backing following protests over George Floyd’s killing. The measures were approved earlier this week by the state’s Democratic-led legislature. Some of the bills had been… 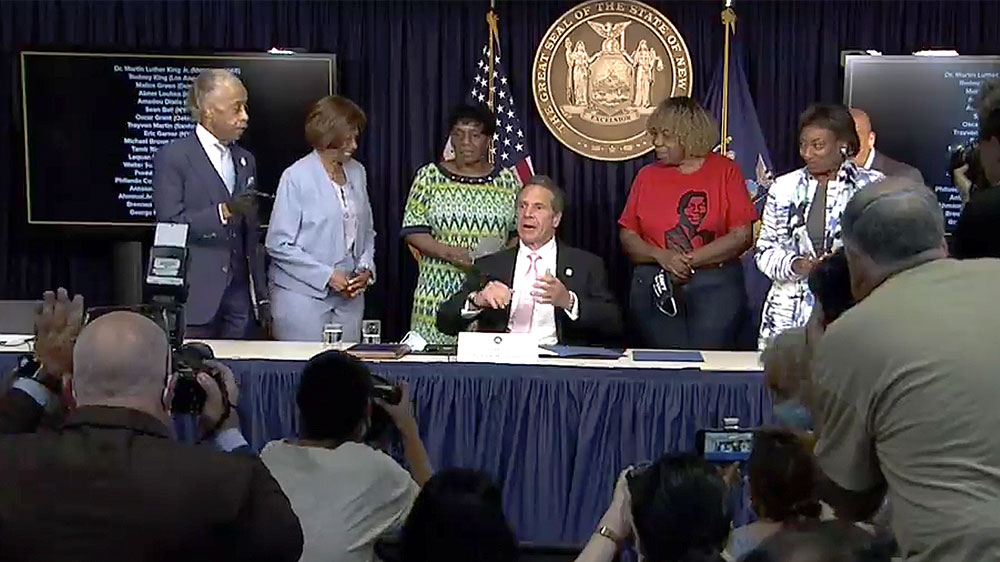 New York Governor Andrew Cuomo signed into law on Friday a sweeping package of police accountability measures, including one allowing the release of officers’ long-withheld disciplinary records, that received new backing following protests over George Floyd’s killing.
The measures were approved earlier this week by the state’s Democratic-led legislature. Some of the bills had been proposed in years past and failed to win approval, but lawmakers moved with new urgency in the wake of massive, nationwide demonstrations over Floyd’s death at the hands of police in Minneapolis.
More:

“Police reform is long overdue, and Mr. Floyd’s murder is only the most recent murder,” Cuomo, a Democrat, said.
Cuomo was joined at the signing ceremony by the Reverend Al Sharpton, Valerie Bell, the mother of Sean Bell, who was killed by an officer in 2006, and Gwen Carr, the mother of Eric Garner, who was killed by police in New York in 2014.
“It was a long time coming, but it came,” Carr said.
The laws will ban police chokeholds, make it easier to sue people who call police on others without good reason, and set up a special prosecutor’s office to investigate the deaths of people during and following encounters with police officers.
“These bills mean some substantive change, so that we won’t be sitting here going over this after the next funeral and after the next situation,” Sharpton said.

Some bills, including body camera legislation, drew support from Republicans, who opposed legislation that repealed a state law long used to block the release of police disciplinary records over concerns about officers’ privacy.
Eliminating the law, known as Section 50-a, would make complaints against officers, as well as transcripts and final dispositions of disciplinary proceedings, public for the first time in decades.
New York Police Department spokesperson Sgt Jessica McRorie said the department “will review the final version of the legislation and utilise it in a manner that ensures greater transparency and fairness”.

Minneapolis Police officers stand in a line while facing protesters demonstrating against the death of George Floyd outside the 3rd Police Precinct in Minneapolis, Minnesota [Kerem Yucel/AFP]

The state’s approximately 500 police departments will all have to come up with plans to address everything from use of force to implicit bias awareness training by next April under an executive order that Cuomo said he will issue Friday.
The governor said New York is the first to come up with such a plan and warned that police departments that fail to do so will not receive state aid.
Patrick Lynch, president of the Police Benevolent Association, New York City’s largest police union, said in a news release that Cuomo and the legislative leaders “have no business celebrating today”.
Lynch said police officers spend their days addressing the “failures” of elected officials. “Now, we won’t even be able to do that,” he said. “We will be permanently frozen, stripped of all resources and unable to do the job.”

#BREAKING: I am signing into law nation-leading criminal justice & police reform bills — including legislation that ends 50-A & bans chokeholds.Thank you to @AndreaSCousins, @CarlHeastie & the Legislature for your partnership and fast action.This is a historic moment for NY.
— Andrew Cuomo (@NYGovCuomo) June 12, 2020

Cuomo has 10 days to act on other bills passed by state lawmakers this week, including legislation prohibiting police from using racial profiling and another bill ensuring that individuals under arrest or in police custody receive attention for medical and mental health needs.
Lawmakers also passed a bill to require New York to collect and report the race and other demographic details of individuals who are charged. The legislation says police departments must “promptly report” to the state the death of any people who die in police custody and in an attempt to establish custody, and provide a demographic breakdown.
Continue Reading…

New York’s governor put out an urgent plea for medical volunteers, and a Navy hospital ship pulled into port Monday as coronavirus deaths in the city mounted and hospitals buckled in what authorities say could be a preview of what other communities across the United States could soon face. “Please come help us in New… 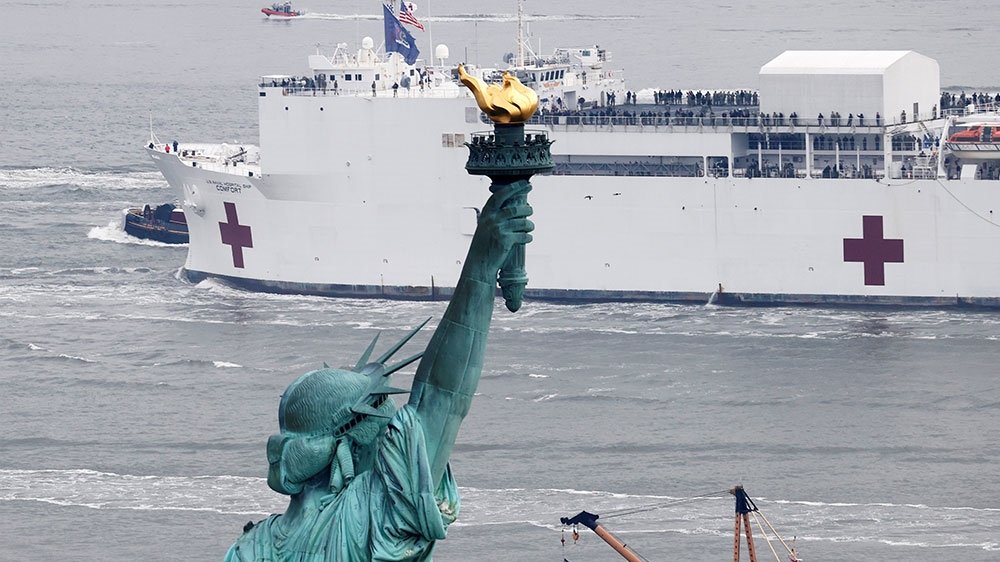 New York’s governor put out an urgent plea for medical volunteers, and a Navy hospital ship pulled into port Monday as coronavirus deaths in the city mounted and hospitals buckled in what authorities say could be a preview of what other communities across the United States could soon face.
“Please come help us in New York now. We need relief,” Governor Andrew Cuomo pleaded as the number of dead in New York State climbed past 1,200, with most of those victims dying in New York City.
More:

“Whether it’s Detroit, it’s New Orleans, it will work its way across the country,” Cuomo added.
Elsewhere around the world, hard-hit Italy and Spain saw their death tolls climb by more than 800 each even as the World Health Organization’s emergency chief said cases in the two countries are “potentially stabilising.” At the same time, he warned this is no time to let up on tough containment measures.
A US Navy hospital ship with 1,000 beds arrived in port in New York to help relieve the crisis gripping the city. The USNS Comfort – also sent to New York City after 9/11 – will be used to treat non-coronavirus patients while packed hospitals deal with those with COVID-19.

Nurses and other medical professionals who have also volunteered to help have begun arriving.
“Anyone who says this situation is a New York City-only situation is in a state of denial. You see this virus move across the state, you see this virus move across the nation. There is no American who is immune to this virus,” Cuomo said.
As he announced the latest death toll, he said, “That’s a lot of loss, that’s a lot of pain, that’s a lot of tears, that’s a lot of grief that people all across this state are feeling.”
Criticising President Donald Trump’s politicising of the crisis, Cuomo told MSNBC earlier on Monday: “The science people, the government professionals have to stand up and look the president in the eye and say this is not a political exercise. This is not press relations. It’s not optics. The tsunami is coming.”
Three-quarters of a million people around the world have become infected and more than 35,000 have died, according to a running count kept by Johns Hopkins University.
The US reported over 140,000 infections and more than 2,500 deaths, with New York City the nation’s worst hot spot.
New hotspots to ‘take off’
Dr Anthony Fauci, the US government’s top infectious-disease expert, warned that smaller cities are about to see cases “take off” the way they have in New York City.
“What we’ve learned from painful experience with this outbreak is that it goes along almost on a straight line, then a little acceleration, acceleration, then it goes way up,” he said on ABC’s Good Morning America programme.
New hotspots of the disease have started to surface in Florida, Michigan and Louisiana, as state officials seek more help in fighting the outbreak.
Fauci told CNN on Sunday that the pandemic could ultimately kill between 100,000 and 200,000 people in the US should mitigation be unsuccessful.
Meanwhile, California Governor Gavin Newsom said on Monday that the number of COVID-19 hospitalisations in the state had doubled over the past four days, and the number of ICU patients tripled during that time.
He did not immediately give figures for those totals.
Last week, the US Congress passed a $2.2 trillion emergency relief bill, promising billions to US states.

Workers throw a dock line as the USNS Comfort pulled into a berth in Manhattan during the outbreak of coronavirus disease (COVID-19), in the Manhattan borough of New York City [Carlo Allegri/Reuters]

Trump said on Sunday that he would extend the guidelines aimed at slowing the spread of the coronavirus to April 30, from his original target of Easter on April 12.
Americans are now being called on to prepare for another 30 days of severe economic and social disruption, as schools and businesses are closed, and public life is upended. One in three Americans remains under state or local government orders to stay at home to slow the spread of the virus.
Continue Reading…