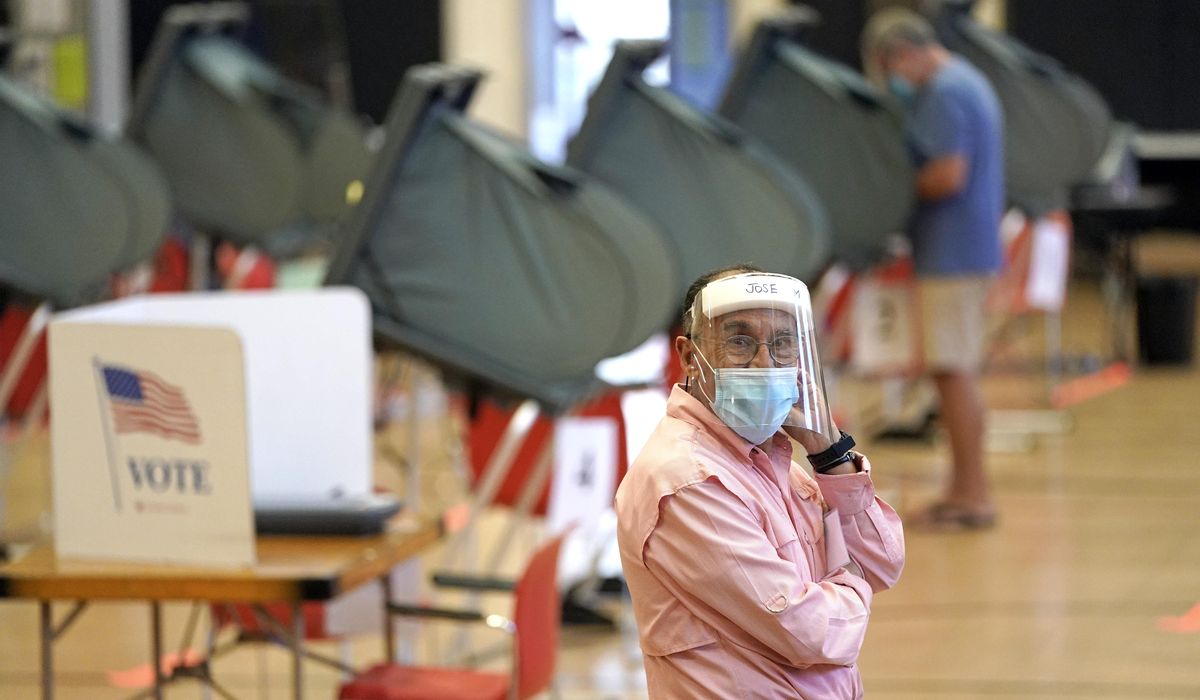 Texas’ largest county has been approving voter registrations even when people say they’re not citizens, according to a lawsuit announced Monday that found some of those people managed to cast ballots, too.

The Public Interest Legal Foundation says it uncovered dozens of examples of people who registered in Harris County over the last two decades, either admitted they weren’t citizens or left the box blank, yet were registered anyway. They were removed from the rolls after they later stated, again, that they weren’t, in fact, citizens.

The Public Interest Legal Foundation says there are others it didn’t catch, including new applicants.

It asked a state appeals court in Houston to order Harris County to deny any applicants who don’t affirmatively check the “YES” box asserting citizenship, or at least to investigate each case before approval.

“Individuals claiming to be foreign nationals should not be registered in Harris County,” said PILF President J. Christian Adams. “These failures harm citizens, but they also put those immigrants into serious jeopardy with federal officials.”

The lawsuit includes registration forms showing the citizenship box checked “NO” and includes voter registration records showing that those people were still signed up. In each case, they were later expunged because officials decided they weren’t in fact citizens.

PILF says that usually occurs when an individual responds to a jury summons by saying he or she isn’t a citizen or file a subsequent voter application.

Neither the Harris County voter registrar nor the county attorney’s office responded to requests for comment.

PILF’s lawsuit is the latest by an ally of the president to challenge election behavior in the months leading up to the Nov. 3 elections.

On Saturday the Trump campaign, Republican National Committee and GOP officials in North Carolina sued that state over new lenient vote-by-mail rules written by the Board of Elections. The Trump team has now filed lawsuits against state or county officials in at least six states.

Trump lawyers accused the North Carolina board of reaching a “backroom deal” to allow voters who cast deficient ballots, such as lacking the right signatures, to “cure” them by signing an affidavit rather than casting a new ballot correctly. The rules also allow ballot harvesting, or collecting of absentee ballots by unrelated people.

Mr. Trump’s lawsuit says the state legislature considered and rejected all of those ideas when it wrote new election laws earlier this year, yet state officials have now embraced them.

“North Carolina law specifically prohibits the practices now promoted by the Board of Elections,” the Trump team said in its lawsuit.

He also accused the Trump team of court-shopping by bringing the lawsuit in the U.S. District Court for the Eastern District of North Carolina. He said cases involving other challenges to the state’s election procedures are being heard in the Middle District, but those rulings haven’t been to the Trump team’s liking.

North Carolina marks at least the fifth state Mr. Trump and his team have sued over voting rules. The others are Montana, New Jersey, Nevada and Pennsylvania. The Trump team also sued some Iowa counties.

Republicans won challenges in Iowa, but had their lawsuit in Nevada tossed by a federal judge who said the claims were too “speculative” at this point.

Most of the challenges are over procedures for mail-in ballots, which Mr. Trump says open the door to more fraud than in-person voting.

That’s particularly true for states rushing to adopt all-mail systems, where every registered voter will be mailed a ballot. Most states use an absentee system in which those planning to vote by mail must request a ballot — and in some cases, to have a valid reason not to vote in person.

The noncitizen registration marks another form of potential fraud.

The Washington Times reported this month on six people who admitted in court cases that they weren’t citizens and cast illegal ballots in 2016, yet whose names remain on voter rolls in North Carolina.

In Texas, the PILF records span 55 cases dating to 1996. Six of them showed votes cast by people later deemed noncitizens.

Some of them may later have earned citizenship.

One 2012 registration form showed the applicant checked the “NO” box for citizenship, then wrote in later that they were a legal resident but “not yet” a citizen. That person is listed as having voted in 2012, then being canceled two years later for not being a citizen.

In each case the situation came to light because Harris County officials registered someone and then later expunged them, citing citizenship reasons.

PILF had to sue Harris County to get the records, winning a settlement that requires county officials to provide seven years of documents. PILF says it still doesn’t have all the ones it’s entitled to.