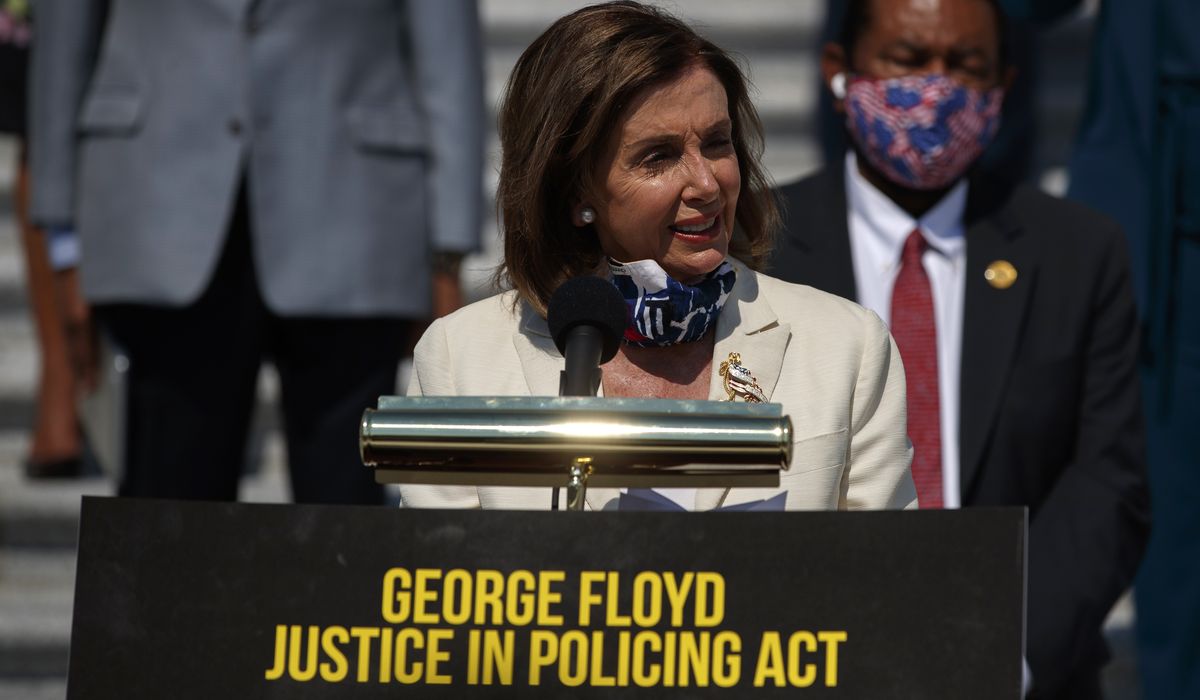 The House on Thursday passed Democrats’ sweeping overhaul of policing, with lawmakers touting new national standards for police conduct and the stripping of legal protections for officers as the only adequate response to Americans’ demands for racial justice.

Democrats rushed forward with their bill despite complaints from the left that it didn’t satisfy calls to defund the police and criticism from law enforcement advocates who say their voices have been muzzled.

The bill, which has been pronounced dead on arrival in the Republican-run Senate, would ban practices such as chokeholds and “no knock” warrants in federal drug cases. It also would impose federal mandates on police training and reporting of police misconduct.

“It will save lives,” Mrs. Pelosi said.

The bill would create a national police misconduct registry and mandate local police departments to issue reports on “use of force” broken down by race, sex and age.

It also would end the qualified immunity that shields police officers from civil lawsuits over violating individual rights in the line of duty. The protection currently applies to all government officials.

The House voted one month after George Floyd, a Black man, died in the custody of Minneapolis police. A White police officer knelt on Floyd’s neck for nearly nine minutes during his arrest.

Floyd’s death sparked protests across the county and around the world. The officer, who was fired from the force, was charged with second-degree murder.

Republicans said it didn’t make sense to press forward with a bill that cannot survive in the Senate.

Mrs. Pelosi also poisoned the well, they said, when she accused Republicans of “trying to get away with murder — the murder of George Floyd” with Senate Republicans’ package of police changes.

Senate Democrats blocked the Republican bill Wednesday with a filibuster, clearing the way for the House Democrats to be the first to pass a racial justice plan.

“This is actually a new low for Speaker Pelosi when it comes to just trying to score points with her newly radical base,” Mr. McCarthy said.

The plan from Sen. Tim Scott of South Carolina, the only Black Republican in the chamber, did not include federal bans or national standards of conduct.

Instead, it would have offered federal funding as an incentive for police departments to end chokeholds. It also would have ramped up reporting requirements on the use of no-knock warrants.

Mr. Scott said the two versions had roughly 70% in common.

Democrats dismissed his offer as “weak tea” that wouldn’t change anything.

Liberal activists said the House should have been more aggressive in dismantling police, as have several U.S. cities including New York and Los Angeles.

“I think it was a missed opportunity and a missed obligation, really, on the part of the House Democrats not to deal with the issue of funding,” said Kumar Rao, who oversees justice policy and campaign work for the Center for Popular Democracy.

He said that instead of leveraging federal law enforcement funding to try to force changes in behavior, the money should be redirected to other priorities.

“The House bill, I would say, is more palatable than the Republican bill,” he said. “But also it doesn’t go far enough and really leaves entirely unaddressed the issue of funding.”

Law enforcement officials said they are tired of being scapegoated over high-profile incidents such as Floyd’s death.

They said their voices are getting lost in the shuffle.

“It’s like saying they’re going to reform hospitals but refusing to even ask doctors, nurses and administrators how hospitals work in the first place,” Mr. Johnson said. “Let’s be clear: It’s not as if the authors of this bill sought input from actual police officers, considered it, and then felt they needed to reject it for any reason. They instead did not even seek to know what’s going on from the officers’ point of view.”