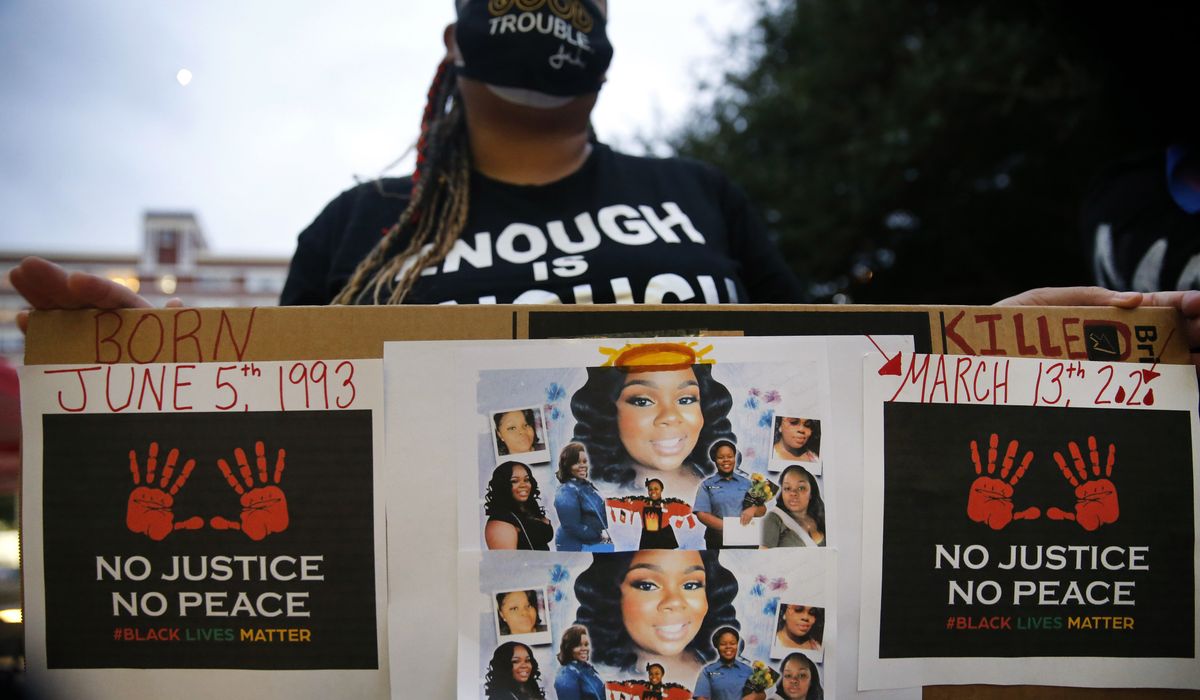 House Democrats on Thursday proposed solving the riots, bloodshed and looting plaguing American cities with more federal investigations of police departments, saying that getting the cops in line would remove the impetus for civil unrest.

They want the Justice Department to crack down on police departments with investigations known as pattern-and-practice probes, which were a hallmark of the Obama administration’s efforts to change police culture.

The Trump administration abandoned the inquiries. He said they were unfair to cops and a waste of taxpayer dollars.

“We continue to see injustice and we continue to see civil unrest because of the desperation that exists in this country around racism and around injustice and lack of accountability. We just saw it yesterday in the Breonna Taylor case,” Rep. Veronica Escobar, Texas Democrat, said at a Judiciary Committee hearing Thursday on the federal response to violent protests.

Ms. Escobar made the comments a day after a grand jury indicted only one of three Louisville, Kentucky, detectives involved in the shooting death of Breonna Taylor, who has emerged as a martyr of the Black Lives Matter movement.

The charges, which are minor and are not related to the death of Taylor, applied only to an officer who fired wildly and put Taylor’s neighbors at risk. The other officers were not charged because they were fired upon first by Taylor’s boyfriend when they entered the apartment with a search warrant.

The announcement sparked a new round of demonstrations in cities across the country. In Louisville, two officers were shot just hours after the protests began.

On Thursday, police identified Larynzo Johnson as a suspect in the shooting and said the officers are expected to recover.

All told, 127 people were arrested in Louisville in the protests, police said.

The Louisville protests are the latest to erupt in U.S. cities as anger over the death of unarmed Black men and women, including Taylor and George Floyd, touched off violent demonstrations that included torched vehicles, looted stores and assaults on police officers.

Floyd, a Black man, died while in police custody in Minneapolis on Memorial Day, touching off the nationwide protests.

At the hearing on Capitol Hill, Democrats and their witnesses insisted that federal investigations of police departments could have prevented the violence.

“If business leaders want their businesses to be protected and they want to ensure the community is at peace, then they too should want the Justice Department to bring their resources in and conduct a pattern and practice investigation,” Sherrilyn Ifill, president and director of the NAACP Legal Defense and Educational Fund, told lawmakers.

Ms. Ifill said the Louisville Police Department was ripe for a pattern-and-practice investigation because it “had problems for many, many years.” She said the probe would create a path forward for the community.

“That will help protect businesses as well because it will bring some order, some vision and a road map for public safety in Louisville,” she said.

Republicans pushed back on the idea of more police investigations. The probes end with consent decrees that, they said, hinder officers’ ability to fight crime.

A consent decree is an agreement in which a local department promises the Justice Department that it will make changes to its procedures. Critics point to a rise in crime in cities that have enacted decrees.

Baltimore and the Justice Department entered into a consent decree in 2017 after a federal investigation in the case of Freddie Gray, who was fatally injured while in police custody.

By 2019, Baltimore recorded one of its deadliest years on record with 348 homicides and more than twice as many shooting injuries.

“If he had not done it, we’d have more of this massive property destruction all across the country,” Mr. Johnson said. “He ought to be applauded for taking a strong stance on that because if he hadn’t, the safety of every single American is in jeopardy.”

The lone Republican witness at the Judiciary Committee hearing was Sam Mabrouk, an Egyptian immigrant who came to the United States over a decade ago. His store in Columbus, Ohio, was looted during the May protests of Floyd’s death.

The loss of merchandise from the store was estimated to be over $70,000 and was not covered by insurance. Mr. Mabrouk told lawmakers that he lost 10 years of savings and hard work in two hours as looters pilfered his store.

Mr. Mabrouk was threatened twice with being shot that night.

“I have been living the American dream, along with all the blood, sweat and tears that it requires,” he said. “Then one day, I woke up to a nightmare of loss and destruction. But I am not a quitter, and I’m ready to work harder than before to get my small business back to where they were before that horrible night of May 29, 2020.”

He said local and state officials failed to adequately ensure his safety and expressed frustration that no one had been prosecuted for the damage to his store.

When asked whether state and local officials protected his property or liberty, Mr. Mabrouk said, “I did not see that.”

Rep. Steve Cohen, Tennessee Democrat, expressed sympathy for Mr. Mabrouk but used his testimony to respond to Republican criticism that Democratic lawmakers haven’t forcefully condemned the violence and destruction across the country this summer.

He said Democrats did not respond earlier this summer when Mr. Barr asked them to condemn the violence during an appearance before the full committee.

Mr. Cohen responded that it was not the “appropriate time.”

“We are against looting and unlawful behavior,” he said.