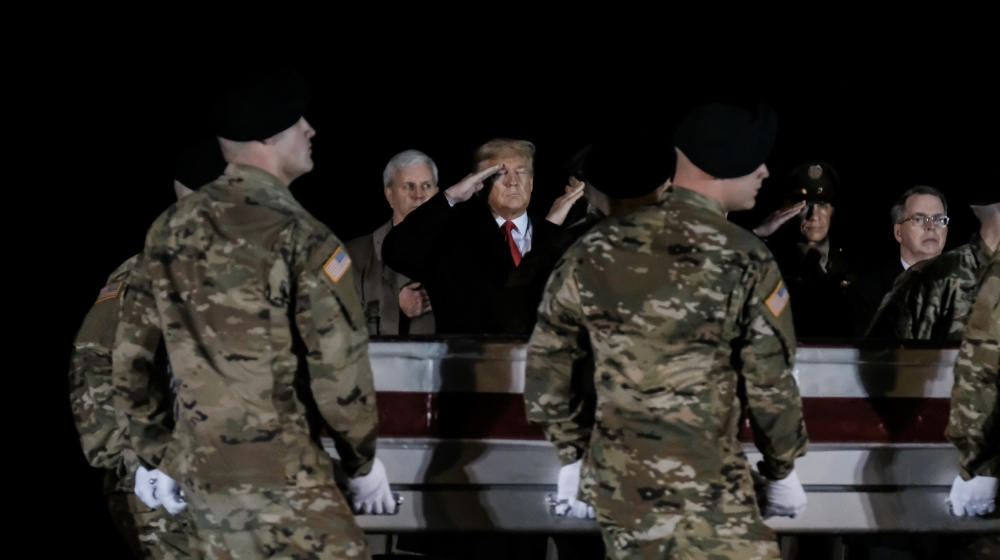 Top officials in the White House were aware in early 2019 of classified intelligence indicating Russia was secretly offering bounties to the Taliban for the deaths of Americans, a full year earlier than has been previously reported, according to United States officials with direct knowledge of the intelligence.
The information came out overnight from White House officials who reiterated the president was unaware,  according to the Associated Press news agency (AP).
The assessment was included in at least one of President Donald Trump’s written daily intelligence briefings at the time, according to the officials. Then-National Security Adviser John Bolton also told colleagues at the time that he briefed Trump on the intelligence assessment in March 2019.
‘Disown everything’
The White House has said Trump wasn’t – and still hasn’t been – briefed on the intelligence assessments because they have not been fully verified. However, it is rare for intelligence to be confirmed without a shadow of a doubt before it is presented to top officials.
Bolton declined to comment on Monday when asked by the AP if he had briefed Trump about the matter in 2019. On Sunday, he suggested to NBC that Trump was claiming ignorance of Russia’s provocations to justify his administration’s lack of response.
“He can disown everything if nobody ever told him about it,” Bolton said.
The New York Times reported that officials provided a written briefing in late February to Trump laying out their conclusion that a Russian military intelligence unit offered and paid bounties to Taliban-linked militants to kill US and coalition troops in Afghanistan.

Mitch knew, and held Trump’s hand as he abandoned our service members. I’ve had family serve in each branch, and it is unspeakable that these two crooks would sacrifice our loved ones in endless wars. At home and abroad, they don’t care if we die.https://t.co/8YyHmOWzOm
— Charles Booker (@Booker4KY) June 27, 2020

The revelations cast new doubt on the White House’s efforts to distance Trump from the Russian intelligence assessments. The AP reported  on Sunday that concerns about Russian bounties also were in a second written presidential daily briefing this year and that current National Security Adviser Robert O’Brien had discussed the matter with Trump. O’Brien denies doing that.
On Monday, O’Brien said that while the intelligence assessments regarding Russian bounties “have not been verified”, the administration has “been preparing should the situation warrant action”.
Russia relations
Democratic lawmakers who were briefed on the matter on Tuesday at the White House emerged from the meeting calling on new sanctions against Russia to deter what they called “malign” activities.
Congressman Adam Schiff, chairman of the House Intelligence committee, said Trump should not be courting Russian President Vladimir Putin by inviting him to a Group of Seven (G7) summit of leading industrial nations but rather should impose costs on Moscow.
“The president of the United States should not be inviting Russia into the G7 or G8. We should be considering what sanctions are appropriate to further deter Russia’s malign activities,” he told reporters after the White House briefing.
The administration’s earlier awareness of the Russian efforts raises additional questions about why Trump did not take punitive action against Moscow for efforts that put the lives of American service members at risk.
Officials said they did not consider the intelligence assessments in 2019 to be particularly urgent, given Russian meddling in Afghanistan is not a new occurrence.
The officials with knowledge of Bolton’s apparent briefing for Trump said it contained no “actionable intelligence”, meaning the intelligence community did not have enough information to form a strategic plan or response. However, the classified assessment of Russian bounties was the sole purpose of the meeting.
The intelligence that surfaced in early 2019 indicated Russian operatives had become more aggressive in their desire to contract with the Taliban and members of the Haqqani Network, a militant group aligned with the Taliban in Afghanistan and designated a “foreign terrorist organisation” in 2012 during the administration of then-President Barack Obama.

US Congress leaders: Did Trump know about Russia and the Taliban

Late Monday, the Pentagon issued a statement saying it was evaluating the intelligence but so far had “no corroborating evidence to validate the recent allegations”.
“Regardless, we always take the safety and security of our forces in Afghanistan – and around the world – most seriously and therefore continuously adopt measures to prevent harm from potential threats,” said Pentagon spokesman Jonathan Hoffman.
Bounties
Concerns about Russian bounties flared anew this year after members of the elite Naval Special Warfare Development Group, known to the public as SEAL Team Six, raided a Taliban outpost and recovered roughly $500,000 in US currency. The funds bolstered the suspicions of the US intelligence community that Russians had offered money to Taliban militants and linked associations.
The White House contends the president was unaware of this development, too.
The officials told the AP that career government officials developed potential options for the White House to respond to the Russian aggression in Afghanistan, which was first reported by The New York Times. However, the Trump administration has yet to authorise any action.

BackPage 1 of 2Next →
In this article:House, White