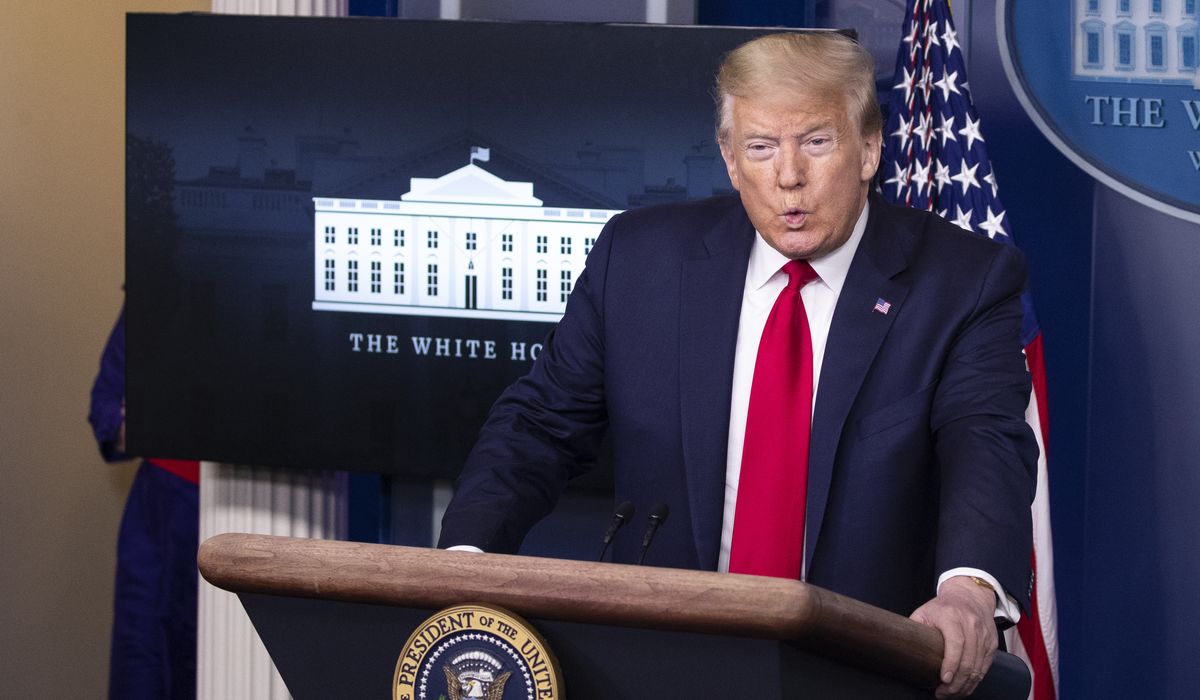 President Trump on Sunday announced he was suspending travel into the United States for non-U.S. citizens who have recently been in Brazil, a new coronavirus hot spot, as top administration officials warned Americans that they aren’t out of the woods in the fight against the pandemic.

The Brazil announcement followed similar restrictions on travel from China, Iran and the United Kingdom as Mr. Trump looks to stem an increase in cases in the U.S.

“Today’s action will help ensure foreign nationals who have been in Brazil do not become a source of additional infections in our country,” said White House press secretary Kayleigh McEnany.

The president made the announcement as Americans hit the road and flocked to beaches over the Memorial Day weekend, stoking fears in some quarters of a potential resurgence of cases.

Dr. Deborah Birx, the U.S. coronavirus response coordinator, said Sunday that it’s an open question on whether the country will need to shut down again if COVID-19 cases spike in the coming months.

“It’s difficult to tell, and I really am data-driven, so I’m collecting data right now about whether governors and whether states and whether communities are able to open safely,” Dr. Birx said on ABC’s “This Week.”

She said officials will be learning more through May, June and July and are preparing for a potential resurgence in the fall.

“I think we’re trying to learn right now very carefully about how you reopen safely. We act like we’ve actually done this before,” she said.

With images of crowded beaches and pools over the holiday weekend, she said she is concerned when people don’t maintain proper social distancing.

Dr. Stephen Hahn, commissioner of the Food and Drug Administration, said Sunday that measures such as social distancing, hand washing and mask wearing “protect us all.”

“With the country starting to open up this holiday weekend, I again remind everyone that the coronavirus is not yet contained,” Dr. Hahn said in a Twitter message. “It is up to every individual to protect themselves and their community.”

All 50 states have moved to relax restrictions as trends on COVID-19 cases and deaths improve in many spots.

Mr. Trump, who has been itching for the country to reopen, also cheered positive trends Sunday as he hit the links at his private golf club in Virginia for the second straight day.

“Cases, numbers and deaths are going down all over the Country!” he said on Twitter.

Mr. Trump suggested last week that economic lockdowns won’t return even in the event of another wave of COVID-19 cases.

The U.S. has had more than 1.6 million cases and more than 97,000 deaths related to COVID-19, the disease caused by the new coronavirus, according to a tracker from Johns Hopkins University.

In announcing the Brazil restrictions, Ms. McEnany said they would not apply to the flow of commerce.

“We hope that’ll be temporary,” Mr. O’Brien said on CBS’s “Face the Nation.” “We’re concerned about the people of the Southern Hemisphere and certainly the people of Brazil. … We’ll take a look at the other countries on a country-by-country basis, for sure.”

Brazil now has more than 347,000 reported COVID-19 cases, which is the second-highest total worldwide behind the U.S., according to a tracker from Johns Hopkins University.

Health and Human Services Secretary Alex Azar said the U.S. now has the tools for testing and contact tracing in place to open the country safely if people take proper precautions.

“We can get back to work, back to school and back to worship in safe ways because of President Trump’s historic response here,” Mr. Azar said on Fox News’ “Sunday Morning Futures.”

Though the curve in cases and hospitalizations is starting to flatten in many locations, it has spiked recently in some states such as Arkansas and North Carolina as businesses reopen.

Arkansas Gov. Asa Hutchinson, a Republican, said state officials don’t see a connection between a relaxing of restrictions and the increase in cases and noted that the positivity rate on testing is running lower than 5%.

“You manage the risk by increasing the testing,” Mr. Hutchinson said on “Fox News Sunday.” “We see [increased numbers of cases] because we are testing more and we’re following and tracing where those are coming from, and they’re not coming from the fact that we’ve lifted some of the restrictions.”

The economic fallout from the lockdowns has been substantial. Close to 40 million Americans have filed for unemployment benefits in recent weeks.

White House senior adviser Kevin Hassett said the unemployment rate could be in the double digits in November even as the economy slowly improves.

“Yes, unemployment will be something that moves back slower,” he said on CNN. “I think it could be better than that. But you’re going to be starting at a number in the 20s and working your way down.”

He said the U.S. unemployment rate for May could be above 20%, which rivals the 24.9% peak rate during the Great Depression.

After months of historic lows, the unemployment rate ticked up to 4.4% in March before spiking to 14.7% in April as the economic fallout from coronavirus-related lockdowns took hold.

Congress is eyeing tweaks to a popular small-business lending program for the next round of federal relief, but Mr. Hassett indicated that quick agreement on a broader package might be trickier.

He said the White House is considering another round of direct payments to Americans but that the popular payments of up to $1,200 might be junked in favor of items such as cuts to payroll and capital gains taxes that Democrats are likely to oppose.

Asked about more money for states and localities, a key Democratic demand, Mr. Hassett said significant aid already has been allocated for that purpose.

“I think that a lot of the requests for state and local bailouts that you’re seeing out there up on the Hill are radically, radically more money than the expected shortfall for the year,” he said. “We’re analyzing the numbers right now, and the requests are kind of absurd.”

He said a lot of Republicans are also concerned that the plussed-up unemployment benefits in the $2.2 trillion package that passed in March have made it more lucrative for many Americans to simply take the benefits rather than work.

“We look forward to working with people on potentially reforming that,” he said.

The Democrat-led House recently passed a more than $3 trillion bill that included another round of direct payments to millions of Americans, close to $1 trillion in additional money for states and localities, and an extension of the boosted federal unemployment benefits through January.

The White House and Senate Republicans have said the package isn’t going anywhere and that it includes extraneous items tied to immigration, elections and marijuana.

Many public health experts have said that a return to “normalcy” won’t really be possible until a vaccine is widely available for the public.

Mr. Azar said an end-of-year time frame for a coronavirus vaccine is a “very credible objective.”

“We just signed a deal with AstraZeneca for the Oxford vaccine where by October we could have a hundred million doses of vaccine and 300 million doses by early next year,” he said.

Mr. Azar said the ongoing debate about reopening the country isn’t necessarily a trade-off between public health and economic concerns.

“It’s actually an issue of health versus health,” he said. “By being locked up in our homes, there [are] very real health consequences.”

He said social and economic dislocation leads to adverse outcomes such as suicide and mental illness, fewer cancer screenings and treatments, and missed opportunities for children’s regular vaccinations.