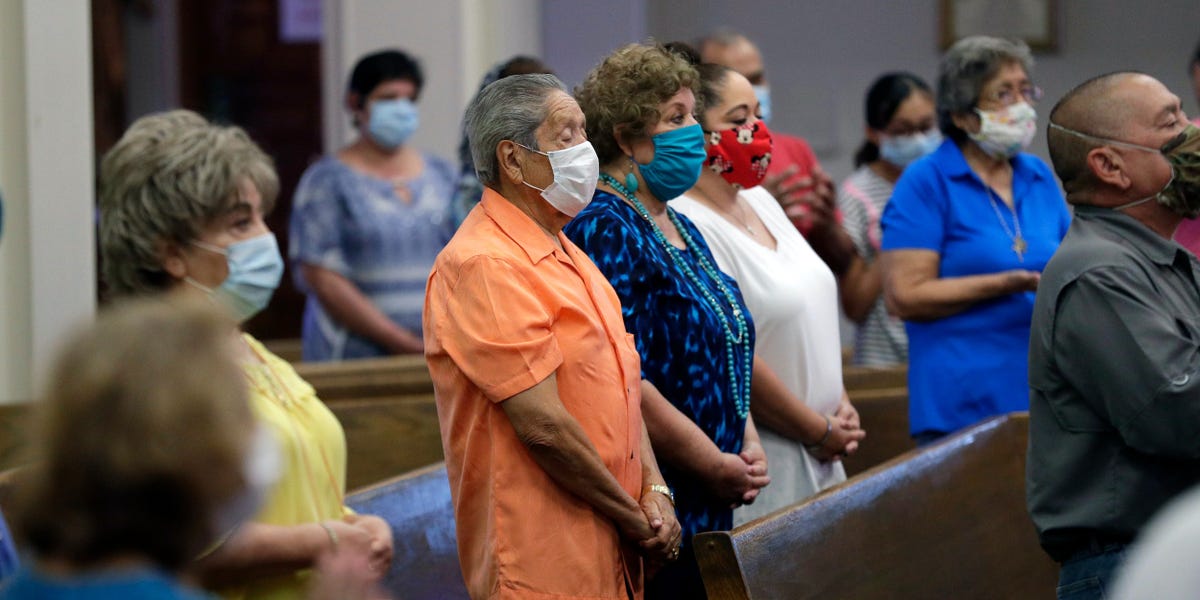 “I call upon governors to allow our churches and places of worship to open right now,” he said during a Friday announcement at the White House. Trump added that he wouldn’t hesitate to “override” state governors that refused to comply.

Although many people want to return to houses of worship, especially during a scary and stressful time, mounting evidence shows these places to be among the riskiest for coronavirus spread.

Clusters of infections can often be traced back to a super-spreader event, in which one person infects an atypically large number of people. So far, these events have shared a few key characteristics: They’ve mostly been indoors and put lots of people from different households in close, extended contact. That’s precisely the type of gathering that churches, mosques, and synagogues facilitate.

“You can’t have a super-spreading event unless there are a lot of people around, so you have to be very careful still about gatherings of people of any size — that includes religious services,” William Schaffner, an infectious-disease expert from Vanderbilt University, told Business Insider.

“The virus doesn’t respect any religions,” he added.

Research has found time and again that the risk of coronavirus transmission is much higher indoors, in poorly ventilated spaces where lots of people have sustained contact. That’s because it primarily spreads via droplets that fly through the air when an infected person coughs, sings, talks, or sneezes.

“Any gathering, from the point of view of the virus, is ideal,” Schaffner said. “People congregate, hug each other, exchange stories, and thank you very much, the virus is going to go from me to you.”

A recent study found that talking loudly can produce enough droplets to transmit the coronavirus, and that those droplets could linger in the air for at least eight minutes. Vigorous singing, too, has been linked to the virus’ spread.

That’s what makes religious services dangerous. Trump indicated that it’s up to religious leaders to minimize these risk factors.

Super-spreader events at churches and a synagogue

In early March, a 57-year-old Arkansas pastor and his wife attended church events and a bible study group a few days before they developed coronavirus symptoms.

Of the 92 people they came into contact with at the church, 35 got sick. Seven had to be hospitalized. Three died.

Contact tracers from the Arkansas Department of Health then discovered 26 more cases and one other death among people who reported contact with the churchgoers. According to a recent CDC report chronicling that super-spreader event, “group gatherings during church events” could be a source of widespread coronavirus transmission.

“These findings underscore the opportunity for faith-based organizations to prevent COVID-19 by following local authorities’ guidance,” the authors wrote.

The story of Lawrence Garbuz, the 50-year-old attorney from New York’s Westchester County, underscores that point.

Garbuz was hospitalized with the virus in late February, and was among the state’s first confirmed cases. A week later, New York had confirmed another 170 cases, including Garbuz’s wife and two children.

Most of those cases were linked to him. The neighbor who drove Garbuz to the hospital got sick, as did the rabbi from his local synagogue and many congregants he’d interacted with during a bat mitzvah and a birthday party.

According to the CDC, houses of worship might therefore facilitate coronavirus transmission “beyond household contacts into the broader community.”

That’s also what happened in Chicago in February, when a person with not-yet-diagnosed coronavirus attended a birthday party. There, the individual sickened seven others, three of whom then attended church services a week later and infected at least one other person.

A person sick with the coronavirus can infect two to 2.5 other people on average, according the World Health Organization. But super-spreader events lead individuals to buck that average.

In mid-February, a 61-year-old woman attended church services at the Shincheonji Church of Jesus on February 9 and 16 in Daegu, South Korea. Soon after, she tested positive for the coronavirus — then so did dozens of others. South Korea’s coronavirus case count quickly jumped from 29 cases on February 15 to more than 2,900 two weeks later.

The 61-year-old super-spreader, dubbed “Patient 31,” may have infected at least 43 people after she attended services, authorities said. Followers of the fringe religious faction were asked to remove protective masks to pray.

The super-spreader label, therefore, doesn’t necessarily indicate that a person is more contagious than others, or that they’re shedding more viral particles. Rather, they have access to a greater number of people in spaces that facilitate infection. A 2011 study found that a small percentage of a population — 20% — was responsible for 80% of disease transmission during an outbreak.