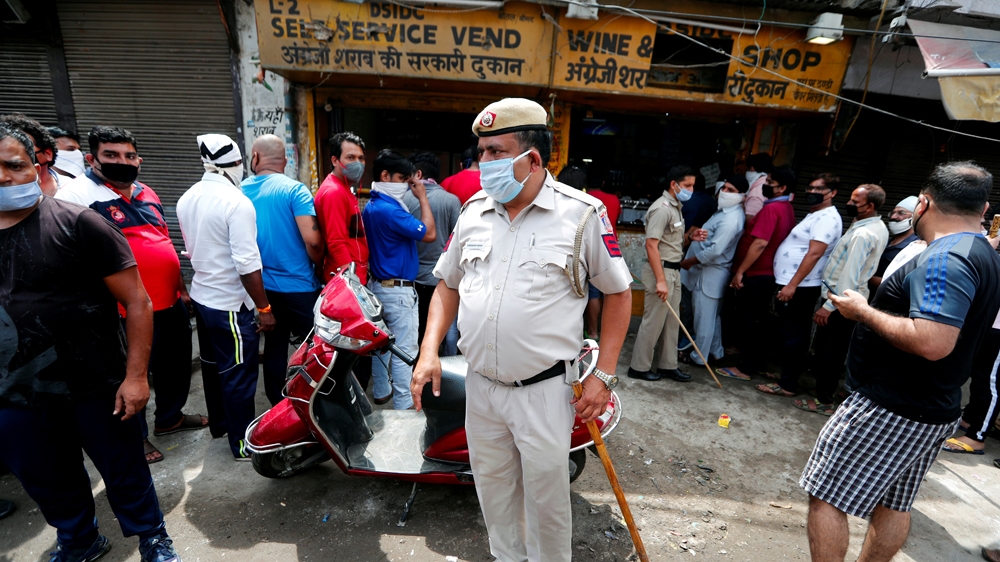 Britain will introduce a 14-day quarantine for almost all international travellers from June 8, interior minister Priti Patel has said, with anyone breaking the rules facing a $1,218 (a 1,000 pound) fine.

Some 80 million infants could be at risk of vaccine-preventable diseases like diphtheria, measles and polio due to disruption of routine immunisation caused by the pandemic, UN agencies have warned.

Spanish authorities have announced that they will partially lift the lockdown restrictions in Madrid on Monday, after the pace of the coronavirus contagion in the region slowed down.

India has registered its biggest jump of coronavirus cases in 24 hours with 6,000 new infections as the country loosens a nationwide lockdown.

Russia has reported 150 new deaths, a record daily rise, taking the country’s official national death toll from the virus to 3,249.

Here are all the latest updates:
Friday, May 22
17:20 GMT – Cyprus ends passenger flights ban from June 9 with conditions
Cyprus will reopen its airports to commercial flights from June 9 after nearly three months of lockdown, Transport Minister Yiannis Karousos has said.
The phased reopening will initially allow passengers to fly to the small EU state from about 20 countries. But the island’s two largest tourist markets, Britain – which accounts for a third of all arrivals – and Russia, are not on the initial lists, amid fears the new coronavirus has not been sufficiently contained.
A second phase of easing restrictions will begin on June 20, the minister said.
17:00 – Nicaragua-Costa Rica pandemic dispute stalls hundreds of trucks at border
Hundreds of freight trucks have been stuck on the border between Costa Rica and Nicaragua as the two countries remain locked in a squabble over measures to contain the coronavirus.
A queue of trucks from across Central America, which a Reuters witness estimated at nearly 1,000 vehicles, sat waiting on both sides of the Penas Blancas border post on Friday.
Costa Rica has criticised Nicaragua for what some have called a lax response to the pandemic and tightened its border controls. Nearly 40 coronavirus cases in Costa Rica stem from infected truck drivers entering the country, authorities say.
On Monday, Nicaraguan President Daniel Ortega ordered the closure of the border in retaliation for Costa Rican measures that disrupted movement of goods, including forcing truck drivers to take coronavirus tests before entering.

16:45 GMT – UK to impose 14-day quarantine for international arrivals from June 8
Britain will introduce a 14-day quarantine for almost all international travellers from June 8, interior minister Priti Patel has said, with anyone breaking the rules facing a 1,000 pound ($1,218) fine.
The government said there would be some exemptions, including road haulage and freight workers, medical professionals travelling to help with the fight against the coronavirus and those coming from Ireland.
“Now we are past the peak of this virus, we must take steps to guard against imported cases triggering a resurgence of this deadly disease,” Patel said at the government’s daily news conference.
16:20 GMT – Trump lashes out at the scientists whose findings contradict him
The US president called one study “a Trump enemy statement”.
He called another “a political hit job”.
As President Donald Trump pushes to reopen the country despite warnings from doctors about the consequences of moving too quickly during the coronavirus crisis, he has been lashing out at scientists whose conclusions he dislikes.
Read more here.

Trump speaks during a roundtable in the State Dining Room of the White House [File: Doug Mills/Getty Images/AFP]

16:00 GMT – Italy daily death toll dips, new cases steady
Italy has recorded 130 new deaths from the COVID-19 epidemic against 156 the day before, the Civil Protection Agency said, while the daily tally of new cases rose marginally to 652 from 642 on Thursday.
The total death toll since the outbreak came to light on February 21 now stands at 32,616, the agency said, the third highest in the world after those of the United States and Britain.

15:40 GMT – Spain death toll rises by 56 to 28,628
Spain’s overnight death toll from the new coronavirus has risen by 56, raising the total to 28,628, the health ministry said.
The number of diagnosed cases rose to 234,824 cases from 233,037 on Thursday, the ministry added.
The daily increase in the death toll and the number of cases is not directly comparable to the previous day due to various regions reporting their recent data with delays.
15:20 GMT – 80 million children at risk of measles, polio as vaccines disrupted: WHO, UNICEF
Some 80 million children worldwide could be at risk of vaccine-preventable diseases like diphtheria, measles and polio due to disruption of routine immunisation during the COVID-19 pandemic, UN agencies and the GAVI vaccine alliance has said.
Data shows that “provision of routine immunization services is substantially hindered in at least 68 countries and is likely to affect approximately 80 million children under the age of 1 living in these countries,” the WHO, UN Children’s Fund (UNICEF) and GAVI said in a joint statement issued ahead of the Global Vaccine Summit set for June 4.
Travel restrictions, delays in vaccine deliveries, reluctance among some parents to leave their homes amid fear of exposure to coronavirus, and a lack of available health workers were behind what it said may be “unprecedented” disruption on a global scale since such expanded programmes began in the 1970s.

15:00 GMT – UK: ‘Stay at home for Eid’ messages slammed as patronising
As Eid approaches, Muslims in the United Kingdom are being bombarded with messages through the media to celebrate at home and observe social distancing measures to avoid spreading the novel coronavirus.
The stream of advice from government, celebrities, and local health and law enforcement officials have been described by some as patronising, as many noticed a double standard.
Social media users expressed their disappointment, saying that there were fewer warnings regarding other recent celebrations such as the VE Day anniversary.
Read more here.

A Muslim woman walks past balloons outside London’s National Hospital for Neurology and Neurosurgery as the spread of the coronavirus disease (COVID-19) continues [File: Simon Dawson/Reuters]

14:45 GMT – Virus deaths five times higher among poor in Spanish region
The coronavirus mortality rate among some of the poorest Catalans is five times higher than among the wealthiest residents of the Spanish region, a study showed, in the latest evidence of how COVID-19 hits the needy hardest.
The northeastern region of Catalonia, which makes up a sixth of Spain’s 47 million population, has the second highest number of registered coronavirus cases and deaths among regions. Spain has been one of the worst-hit countries with nearly 28,000 deaths.
The study by a regional health department institute cross-checked Catalonia’s coronavirus cases and fatalities up to May 7 against age and incomes.
14:30 GMT – Unemployment rose in all 50 US states in April: Labor Department’s BLS
Unemployment rates rose and total employment fell in all 50 US states and the District of Columbia in April as efforts to contain the coronavirus pandemic forced businesses to close across the United States, the Labor Department has said.
The department’s Bureau of Labor Statistics said 43 states set record-high levels of unemployment last month, with the highest being in Nevada, the state with the greatest reliance on the hard-hit food services and hospitality industry. The rate in Nevada surged 24.2 percentage points to 28.2 percent – nearly twice April’s national employment rate of 14.7 percent.

US small businesses: Innovating to survive virus slow down

14:15 GMT – Not ‘everything has gone perfectly’, says NHS England chief executive
Britain should have learned more from other countries who were tackling coronavirus outbreaks earlier, the head of NHS England Simon Stevens has said, acknowledging that not everything with the response had gone perfectly.
Asked by lawmakers on a parliamentary committee whether Britain should have learned lessons on things like the provision of protective equipment, Stevens, chief executive of the National Health Service in England, said: “I’m sure the answer to that is definitely yes.”
“I don’t think everything has gone perfectly, in a way how could it? There are clearly things that we will want to learn from and do differently in future,” he told the Public Accounts Committee.
More:

Food supply chains do not care if people go hungry

Opinion: The price of America’s quest for an external enemy

14:05 GMT – Malaria drug touted by Trump tied to increased risk of death: study
The Malaria drug hydroxychloroquine, which US President Donald Trump says he has been taking, was tied to increased risk of death in a study in 96,000 COVID-19 patients, according to a paper published in the Lancet.
The study found that people treated with hydroxychloroquine, or the closely related drug chloroquine, had higher risk of in-hospital death when compared to those who had not been given the drug.

13:50 GMT – Czechs say epidemic under control, further lockdown easing on Monday
Czech health authorities believe the spread of the new coronavirus is under control despite a tick-up in cases in recent days, as the country prepares to open pubs, hotels and relax mask-wearing rules on Monday.
The Czech Republic took early action in March to close borders, schools and much of the services sector and has also been eager to relax many of the restrictions. Most retail and sports grounds have already reopened and from Monday public events for up to 300 people will be allowed and swimming pools and schools will reopen.
Health Minister Adam Vojtech said an initial easing of restrictions from May 11 had not had an adverse effect. The country has confirmed 8,757 cases of COVID-19 by Friday morning, with 306 deaths.
“There are no negative trends noted, it is still valid that the Czech Republic has managed the situation very well,” he told reporters.

A worker in a protective suit disinfects the statue of first Czechoslovak President T. G. Masaryk at Hradcanske Square in Prague in March [Martin Divisek/EPA]

BackPage 1 of 2Next →
In this article:India, reports