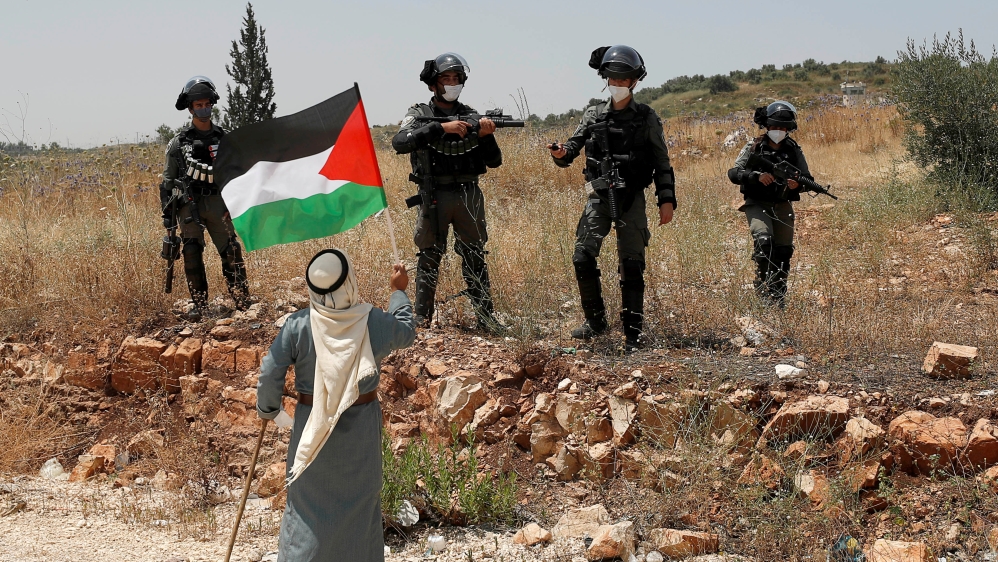 Israeli Prime Minister Benjamin Netanyahu has said he will begin to annex one third of the already illegally occupied West Bank, including parts of the strategic Jordan Valley, in line with US President Donald Trump’s controversial so-called “Middle East plan”.
The plan, announced in January, proposes to establish a demilitarised Palestinian state on a patchwork of disjointed parts of the Palestinian territories.
This does not include occupied East Jerusalem, which the Palestinian Authority (PA) claims as the capital of a state it seeks.
Trump’s Middle East plan has been largely met with scepticism and was rejected by Palestinian leaders, but Israel has taken it as a show of support for its plans to seize and extend its sovereignty over the occupied land.

What does annexation mean?
Annexation is a term used when a state unilaterally incorporates another territory within its borders.
Annexing the Jordan Valley would mean that Israel would officially consider it part of its state.
“International law is very clear: Annexation and territorial conquest are forbidden by the Charter of the United Nations,” said Michael Lynk, the UN independent expert on human rights in the Palestinian territories.
The West Bank is seen as occupied territory under international law, making all Jewish settlements there – as well as the planned annexation – illegal.

The US has rejected the consensus that Israeli settlements on Palestinian land are illegal.
“Decisions about Israelis extending sovereignty to those places are decisions for the Israelis to make,” Secretary of State Mike Pompeo told reporters last week.
What has the international reaction been?

The United Nations and the European Union say the plans threaten the possibility of reaching a peace agreement in the long-running Israeli-Palestinian conflict.
Arab countries have also warned the planned annexation could affect security in the region.
What are the consequences?
The planned Israeli annexation would deprive Palestinians of key agricultural land and water resources, especially in the Jordan Valley region.
It would also effectively kill the two-state solution to the Arab-Israeli conflict that was based on the idea of land for peace.
But many Palestinians would argue that the annexation is merely a formality for what has already been happening on the ground in the occupied West Bank for years.
Increased settlement construction over the past years, along with Jewish-settler-only roads that connect to Israel, have carved the territory up, resulting in non-contiguous Palestinian cities, towns and villages that now exist in cantons.
How has Palestinian leadership reacted?
Mohammad Shtayyeh, the prime minister of the Palestinian Authority (PA), called the annexation plans an “existential threat” and said Palestinians will respond with their own measures.
In May 2019, the PA said it will cancel all bilateral agreements with Israel and the US.
Palestinian Foreign Minister Riyad al-Maliki warned any annexation would be a “crime” and lead to immediate and tangible repercussions.
The Gaza-based Hamas government has called for unity among Palestinians and popular acts of resistance against Israeli plans to annex parts of the occupied West Bank.
Continue Reading…