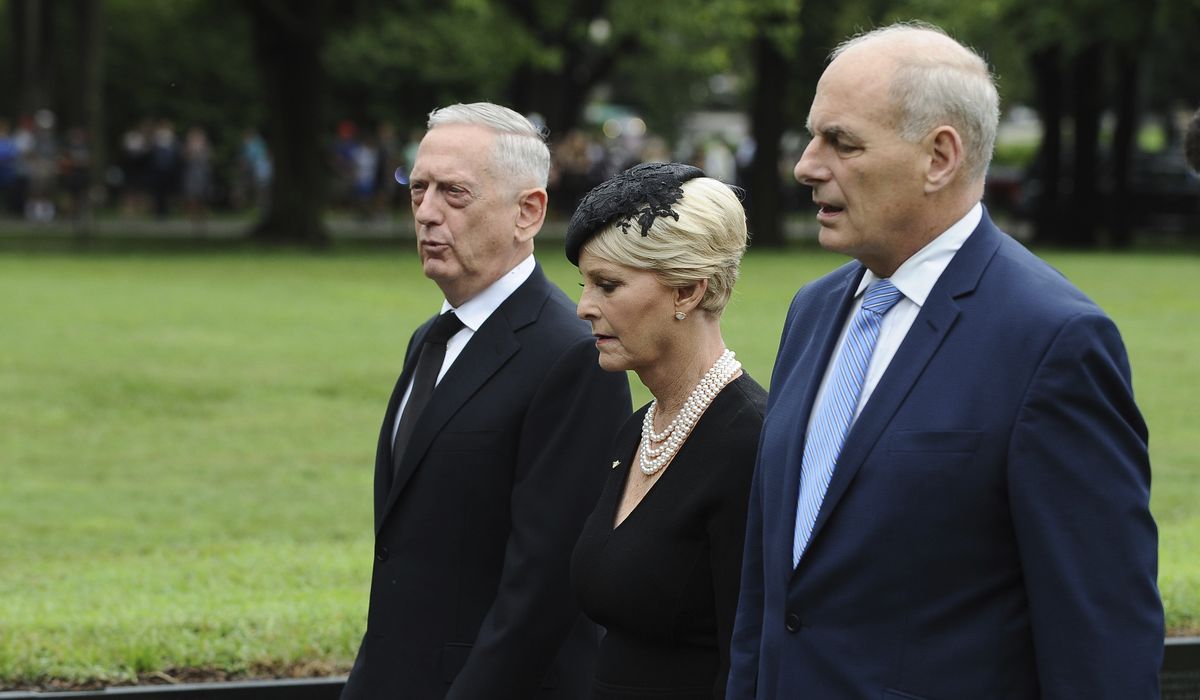 The ranks of what President Trump once called “my generals” is getting smaller by the day.

In an extraordinary break with tradition, a slew of recently servicing senior brass — capped by retired Marine Gen. James Mattis, Mr. Trump’s ill-starred first secretary of defense — have gone public with their criticisms of the commander in chief and their concerns he is dragging the military into partisan waters.

And Mr. Trump, a mold-breaking president in so many ways, is giving as well as he gets, firing a Twitter broadside personally attacking Gen. Mattis Wednesday evening. The White House also left current defense secretary, Mark Esper, twisting in the wind Thursday about his job security after he broke with the White House on the need for active-duty troops to help quell racially-charged protests on the streets of Washington D.C. and other cities.

Trained from the time they enter the service to salute and obey their civilian leadership, the open revolt by military figures has sparked a sharp debate over the decision to go public with their dissent.

Just this week, Mr. Mattis, two former heads of the Joint Chiefs of Staff, a former NATO commander, a former head of U.S. special forces, and a former commander of the U.S. mission in Afghanistan are among those who criticized Mr. Trump’s leadership or his idea to deploy active-duty troops to help deal with domestic political protests and violence.

“I have not seen anything like this since the height of the Vietnam War,” said Mark Cancian, senior adviser at the Center for Strategic and International Studies, retired Marine Corps colonel and former Pentagon official. He said many of the generals and admirals were moved to act to protect the military as an institution, one that enjoys some of the highest approval ratings in popular surveys.

“I think all of them objected to Trump’s attitude and style, but that’s not enough,” Mr. Cancian said. “His attitude and his style have been on display for three years now. People didn’t like it, but nobody was writing letters.”

Particularly searing for his critics was Mr. Trump’s decision to clear protesters from Lafayette Square across from the White House so the president and his aides could be photographed at the riot-damaged St. John’s Church. Mr. Esper, who has given confusing accounts of what he knew of Monday evening’s events, was in the photo, and Joint Chiefs of Staff head Gen. Mark Milley, wearing fatigues, accompanied the presidential entourage part of the way.

Retired Marine Gen. John Kelly, who lasted 18 months as Mr. Trump’s second White House chief of staff, on Thursday became the latest ex-general to break with the president and side with Mr. Mattis.

In an interview with The Washington Post, Mr. Kelly challenged the president’s contention on Twitter that he had fired the “overrated” Mr. Mattis in 2018, saying, “Jim Mattis is an honorable man.”

“I didn’t like his ‘leadership’ style or much else about him, and many others agree. Glad he is gone!” the president wrote.

Debate on the Hill

As many at the Pentagon feared, the debate on Mr. Trump and the military has now spilled over to Capitol Hill, with lawmakers both defending and attacking Mr. Trump’s right as the commander in chief to deploy U.S. forces as he sees fit.

“You don’t quite understand that from the time President Trump wakes up until he goes to bed, there’s an effort to destroy his presidency,” Mr. Graham told “Fox and Friends” Thursday. “It is so fashionable to blame President Trump for every wrong in America.”

But moderate Sen. Lisa Murkowski, Alaska Republican, sided strongly with Mr. Mattis and said the whole incident had caused her to doubt her own support for the president.

“I was really thankful,” Ms. Murkowski told reporters on Capitol Hill Thursday. “I thought General Mattis’s words were true and honest and necessary and overdue.”

Gen. Mattis, who had largely refrained from commenting on his relationship with Mr. Trump — even in a memoir he published last year, let loose in a essay to The Atlantic Wednesday night that was simultaneously emailed to numerous reporters.

He denounced the St. John’s visit as a “bizarre photo op” and called out military leadership — without naming Mr. Esper or Gen. Milley — for being at the scene.

“We must reject any thinking of our cities as a ‘battlespace’ that our uniformed military is called upon to ‘dominate.’ At home, we should use our military only when requested to do so, on very rare occasions, by state governors,” he said.

The reference to Mr. Esper in the comment was obvious. In an earlier phone call with governors, the secretary urged them to “dominate the battlespace” when dealing with nationwide protests. Following a barrage of criticism, Mr. Esper said he regretted using the term in the conversation.

Gen. Mattis wasn’t the first retired military leader to publicly denounce the president. Adm. William McRaven, a retired Navy SEAL who led the mission that killed Osama bin Laden, has written several articles lambasting Mr. Trump — including one that said he would welcome having his security clearance revoked if it meant adding his name to the list of those who have criticized him.

But the cascade of attacks this week had some comparing the clash to the public break between President Truman and Gen. Douglas MacArthur on the right strategy for the Korean War.

On June 2, retired Navy Adm. Mike Mullen, a former chairman of the Joint Chiefs, wrote that he was “sickened” to see the National Guard and other security personnel forcibly clear a path in order to accommodate the president’s visit to St. John’s Church.

Gen. John Allen, another retired four-star Marine Corps general, wrote in Politico that June 1 — the day President Trump gave a tough law and order speech in the Rose Garden and then crossed Lafayette Park — “may well signal the beginning of the end of the American experiment.”

President Trump and his allies would likely brush off some of the criticism as partisan politics.

The president had already accused Adm. McRaven of being a Hillary Clinton supporter during the 2016 campaign, a charge the admiral rejected. Gen. Allen, now head of the Brookings Institution think tank in Washington, D.C., did endorse Mrs. Clinton and castigated then candidate Trump at the Democratic convention in Philadelphia.

But the broadside from Gen. Mattis stings. He had been part of the Trump Administration and even after leaving, the “Warrior Monk” kept studiously silent about any misgivings he might have had about President Trump.

“He made a good faith effort after leaving not to speak up after every tweet or every little thing that happened. My sense is he really wanted to keep quiet,” said Bradley Bowman, senior director of the Center on Military and Political Power at the Foundation for Defense of Democracies.

Mr. Bowman, a former Army officer who had taught politics at West Point, said he imagines Mr. Mattis’ was besieged with comment anytime President Trump made a controversial statement on military policy.

“He would have chosen time and time again to respectively decline,” he said.

Support in the ranks

Mr. Trump has spoken of his strong political support in the military, citing record defense budgets and pay raises he has won for the rank and file.

But that may be slipping since the 2016 election. A poll of active-duty troops by Military Times in December 2019 said 50 percent of them hold an unfavorable view of the president — compared to 37 percent during the election. Commissioned officers were most likely to be against President Trump.

Ret. Navy Adm. James Stavridis, supreme allied commander of NATO during the Obama Administration,wrote this week in Time magazine about being “hurt” when he spotted military troops while protesters were being ejected from Lafayette Park before Mr. Trump’s walk.

The military, he wrote, “are not meant to be turned against their fellow citizens. Our Founding Fathers feared the use of a standing army that could be used to further the aims of a dictator.”

Mr. Cancian at the Center for Strategic and International Studies, said military troops “make lousy policemen” because in most cases they aren’t appropriately trained to deal with civilians in a law enforcement capacity.

As a result of their training and background, the military is traditionally more willing to use firepower to resolve a situation, Mr. Cancian said.

“It’s just the way they’ve been trained — the kind of adversaries they are trained to face,” he said.

Left unresolved is the fate of Mr. Esper, amid reports Mr. Trump’s advisers were unhappy with his performance this week and the mixed messages emanating from the Pentagon. Active-duty troops dispatched to the Washington area as a precautionary measure were first reported to be heading home, but then Wednesday evening were told to remain for the time being.

Senate Majority Leader Mitch McConnell and other Republican lawmakers expressed qualified support for the embattled defense secretary, while others, such as Sen. Mitt Romney, Utah Republican and frequent Trump critic, said they hoped he stayed on to essentially check the president’s worst impulses.

“I hope that having a different point of view is not a disqualification for being in this administration,” he told Politico Thursday.

Added Sen. Graham, “There’s no reason to let him go. That’s all just a bunch of chatter.”

— This article was based in part on wire service reports.