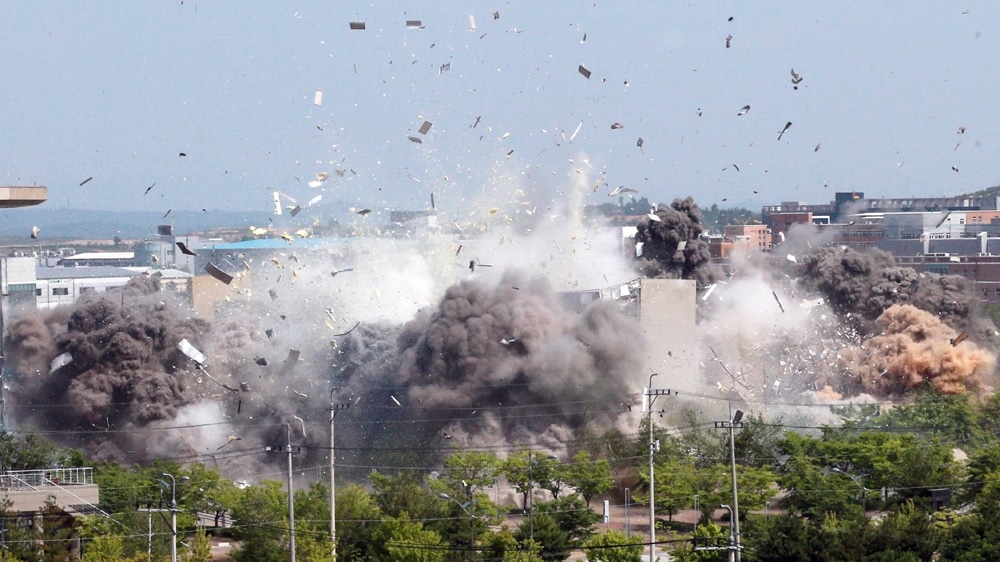 North Korea said on Wednesday that it would redeploy troops to demilitarised border areas, rejecting South Korea’s offer to send special envoys to ease tensions and effectively ending 2018 reconciliation efforts.
The moves, reported by state news agency KCNA, came a day after Pyongyang destroyed the joint liaison office that had been set up in the border town of Kaesong as part of the peace agreements, and drew a strong rebuke from South Korea’s presidential office.
More:

South Korea’s President Moon Jae-in had on Monday offered to send his national security adviser Chung Eui-yong and spy chief Suh Hoon to Pyongyang as special envoys, and urged Pyongyang to return to dialogue.
But Kim Yo Jong, the sister of North Korean leader Kim Jong Un and a senior governing party official, “flatly rejected the tactless and sinister proposal,” according to KCNA.
Kim ridiculed Moon’s offer and accused him of using envoys to tide over crises and suggesting “preposterous proposals.” KCNA said.
“The solution to the present crisis between the North and the South caused by the incompetence and irresponsibility of the South Korean authorities is impossible and it can be terminated only when the proper price is paid.”
In response, Moon’s office said the South would no longer accept “unreasonable behaviour” by the North.
Yoon Do-han, a spokesman for the presidential Blue House, said Kim’s criticism of Moon was rude and senseless and “fundamentally damaged the trust built by the two leaders.”

South Korean army soldiers on the back of trucks in Paju, near the border with North Korea on Wednesday amid rising tensions between the two countries [Ahn Young-joon/AP Photo]

The escalation, undoing cross-border peace deals linked to economic development, would be a major setback to Moon’s bid for more lasting reconciliation with North Korea, and would further complicate already stalled US-led efforts to persuade Pyongyang to abandon its nuclear and missile programmes.
Kim Yo Jong also harshly criticised Moon in another KCNA statement, saying he had turned inter-Korean ties into a “US puppet.”
“In the eyes of the Kims, Moon’s administration gave too much false hope that it would defy US pressure to move their relations forward,” Chun Yung-woo, a former South Korean nuclear envoy, told Reuters news agency.
Troop moves
In a separate KCNA report on Wednesday, a spokesman for the General Staff of the (North) Korean People’s Army (KPA) said the country would dispatch troops to Mount Kumgang and Kaesong near the border, where the two Koreas previously carried out joint economic projects.
Police posts that had been withdrawn from the heavily fortified Demilitarized Zone (DMZ) would be reinstalled, while artillery units near the western sea border where defectors frequently send leaflets would be reinforced with the readiness alert heightened to the level of “top-class combat duty”, the spokesman said.
South Korea’s defence ministry warned of the dangers of military action.
“These moves thwart two decades of efforts by South and North Korea to improve inter-Korean relations and to keep peace on the Korean peninsular,” Jeon Dong-jin, director of operations at the Joint Chiefs of Staff was quoted as saying by Yonhap news agency. “If the North actually takes such a a move, it will certainly pay the price for it.”

The KPA said on Tuesday that it had been studying an “action plan” to re-enter zones that had been demilitarised under a 2018 inter-Korean military pact and “turn the front line into a fortress”.
Seoul’s defence ministry has urged North Korea to abide by the agreement, under which both sides agreed to cease “all hostile acts” and dismantled a number of structures along the DMZ.
Monday marked the 20th anniversary of the first inter-Korean summit. Moon expressed regret that North Korea-US and inter-Korean relations had not progressed as hoped.
Continue Reading…