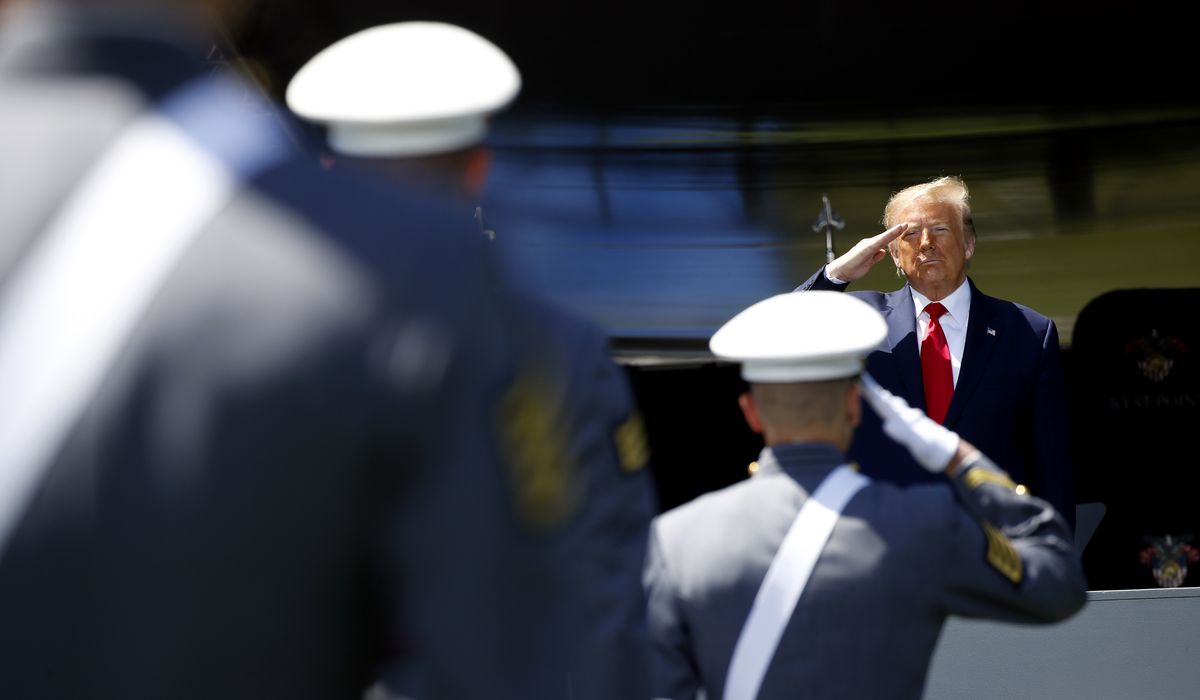 This year’s U.S. Military Academy at West Point graduating class will continue a proud “legacy purchased with American blood” as they continue their careers in the armed forces, President Trump said Saturday during a commencement ceremony at the historic site.

In an address to the 1,107 West Point graduates, the president praised the role the Army has played throughout U.S. history, from the American Revolution to more recent conflicts in Afghanistan and Iraq. Mr. Trump also gave a nod to the recent unrest that has swept the nation following the death of George Floyd two weeks ago, saying that the military as an institution stands strong in the midst of the “the passions and prejudices of the moment.”

“When times are turbulent, when the road is rough, what matters most is that which is permanent, timeless, enduring and eternal,” Mr. Trump said. “The Army exists to preserve the Republic, and the strong foundations upon which it stands: Family. God. Country. Liberty. And justice.”

Mr. Trump’s decision to speak at Saturday’s West Point ceremony drew criticism from some lawmakers who said that assembling the class amid the COVID-19 pandemic was dangerous and unnecessary. Military officials, however, took great precautions to ensure social distancing at the event. No family or friends were present at the ceremony and the cadets were seated several feet apart from one another.

The president seemed to relish the chance to escape Washington and speak to a military audience.

“This is your history. This is the legacy that each of you inherits,” he said. “It is the legacy purchased with American flood at the crest of Little Round Top, on the crimson beaches of Normandy, in the freezing mud of Bastogne, and the dense jungles of Vietnam. It is the legacy of courageous, selfless, faithful patriots who fought for every inch of dirt with every ounce of strength and every last scrap of heart and drive and grit they had. And they did it because they believed in the undying principles of our founding.”

Mr. Trump mostly avoided politics during his speech. Most notably, he steered clear of recent clashes with top military leaders who decried the White House’s plan to activate U.S. troops to quell unrest in the streets following Mr. Floyd’s death.

The plan was ultimately abandoned amid a wave of criticism. Top military officials in recent days also have expressed regret for their role in a photo-op Mr. Trump held last week in front of St. John’s Episcopal Church at Lafayette Square — an event that was preceded by the aggressive disbanding of protesters in front of the White House.

Joint Chiefs of Staff Chairman Gen. Mark A. Milley apologized this week for being present at the event and giving the perception that the military was wading into domestic politics.

“Like many, I am concerned about politicization of the military. But today is all about these exceptional young officers,” Sen. Jack Reed, Rhode Island Democrat and ranking member on the Senate Armed Services Committee, said in a statement honoring the West Point graduates.

Mr. Trump also did not mention a dispute with top military leaders over the possible renaming of Army bases named after Confederate generals. The president opposes such a move, while Pentagon officials have said they’re open to the idea.

The president did, however, reiterate a key foreign policy principle that’s driven decisions throughout his time in office: That the young men and women graduating from West Point should not put their lives on the line to wage “endless wars” in the Middle East.

“We are restoring the fundamental principles that the job of the American soldier is not to rebuild foreign nations but to defend and defend strongly our nation from foreign enemies,” he said. “We are ending the era of endless wars. In its place is a renewed, clear-eyed focus on defending America’s vital interests. It is not the duty of U.S. troops to solve ancient conflicts in far away lands that many people have never even heard of.”

John Thompson Jr., the larger-than-life Georgetown University and D.C. legend, is credited — and rightly so — with breaking down barriers for Black coaches, for making his hometown a better place and for serving as a protector, mentor and role model for generations of young men and women. But for former Georgetown basketball great Allen… 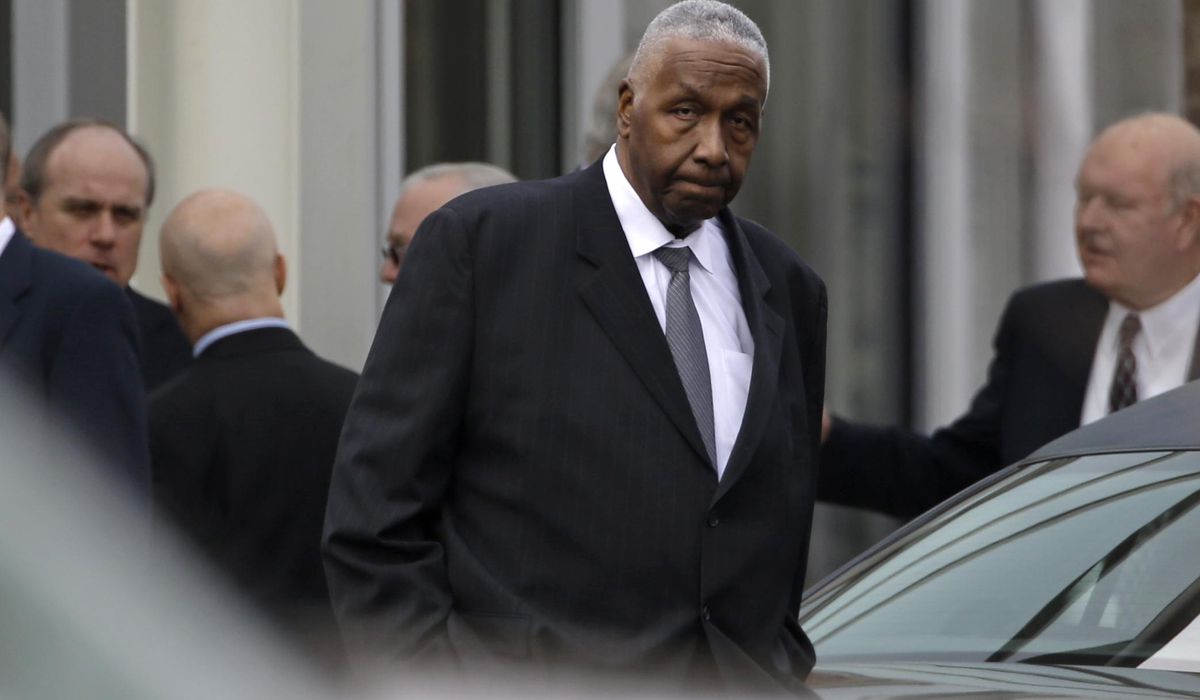 John Thompson Jr., the larger-than-life Georgetown University and D.C. legend, is credited — and rightly so — with breaking down barriers for Black coaches, for making his hometown a better place and for serving as a protector, mentor and role model for generations of young men and women.

But for former Georgetown basketball great Allen Iverson, it goes even further: The NBA Hall of Famer thanks Thompson for his very life.

The onetime Virginia high school basketball phenom remembers that when he lost his scholarship offers after a four-month prison stint in 1993, no one but Thompson was willing to give him an opportunity.

“My mom went to Georgetown and begged to give me a chance,” Iverson, fighting through tears, said at his Hall of Fame induction ceremony in 2016. “And he did.”

Thompson’s influence on Iverson and hundreds of others in sports, politics and other walks of life could be seen in the collective nationwide outpouring of grief Monday when it was announced that he had died at the age of 78.

No official cause of death has been announced.

A towering 6-foot-10-inch former member of two championship Boston Celtics squads, Thompson returned home to the District to coach high school basketball before taking over the Hoyas in 1972. He soon turned the sleepy program into a perennial powerhouse. Along the way, he became the first Black head coach to win an NCAA national championship in a major sport.

During games, he directed his teams with his booming baritone voice and paced the sidelines with a signature white towel tossed over his right shoulder. Off the court, he was a champion for his players. He was determined to mold them into men and show them the possibilities an education could provide.

Thompson and star center Patrick Ewing led the Hoyas to the 1984 national title, which culminated in an 84-75 win over Houston in the championship game. Georgetown also reached the 1982 and 1985 title games but lost, the latter to Villanova in what many consider to be college basketball’s biggest upset.

Thompson coached Georgetown from 1972 to 1999 and compiled a 596-239 record. He abruptly resigned midway into the 1998-99 season, citing personal issues during a lengthy divorce settlement with his wife, Gwen.

After Georgetown joined the Big East Conference in 1979, the Hoyas qualified for the NCAA Tournament 17 times in 20 seasons. Thompson also coached USA to the bronze medal in basketball at the 1988 Summer Olympics and was inducted into the Naismith Memorial Basketball Hall of Fame in the class of 1999.

“He has done so much to impact my life and the people he has coached and mentored along the way,” Ewing said in a statement. “However, his reach went well beyond just those who he knew personally. He changed the world and helped shape the way we see it. He was a great coach but an even better person and his legacy is everlasting.”

Thompson grew up in the era of segregation and spoke out against racism throughout his career. Early in his tenure as a college coach, he faced a banner hanging in a gym calling him the n-word. He also faced accusations that he himself was racist because most of his recruits were Black.

Through it all, Thompson grappled with the topic of race. Before winning the 1984 title, Thompson became the first Black coach to lead a team to the Final Four in 1982. When a reporter asked him about that achievement, Thompson said he “resented the hell out of” the question.

“It implies that I am the first Black man to be accomplished enough and intelligent enough to do this. It is an insult to my race,” Thompson said. “There have been plenty of others who could have gotten here if they had been given the opportunity they deserved.”

He wasn’t afraid to take a stand. In 1989, he famously walked out of Georgetown’s game against Boston College just before tipoff as a way to protest Proposition 48, an NCAA rule that aimed to deny financial aid to recruits who did not meet minimum scores on standardized tests. Thompson said he believed the requirement was negatively affecting minority students.

Thompson was a fearless advocate for his players. In the 1980s, he told D.C. drug lord Rayful Edmond, who had befriended several members of the Hoyas, to stay away from his players, including future NBA star Alonzo Mourning.

“Rayful didn’t want any harm to come to any of my players,” Thompson later said in an interview. “And I wanted to make sure no harm came to them — including guilt by association.”

Before making his mark as a coach, Thompson played at Providence College. He then joined the Celtics, where he won NBA titles in 1964-65 and 1965-66, coming off the bench for Bill Russell.

Thompson’s eldest son, John Thompson III, coached the Hoyas from 2004 to 2017. Thompson III took the Hoyas to the Final Four in his third season, but the team’s postseason results slacked off after that. He was succeeded in the 2017-18 season by Ewing. It was the former star player’s first head coaching gig.

Both Thompson III’s and Ewing’s coaching tenures at Georgetown illustrated how intertwined the basketball program is with the legacy of the elder Thompson. The university dubbed him “head coach emeritus” not long after his resignation.

Later in life, Thompson worked as an NBA and college basketball television commentator, hosted a local sports radio program and sat on the Nike board of directors.

As a commentator, he once said he would be happy to coach the disruptive DeMarcus Cousins with the memorable quip, “You can calm down a fool before you can resurrect a corpse.”