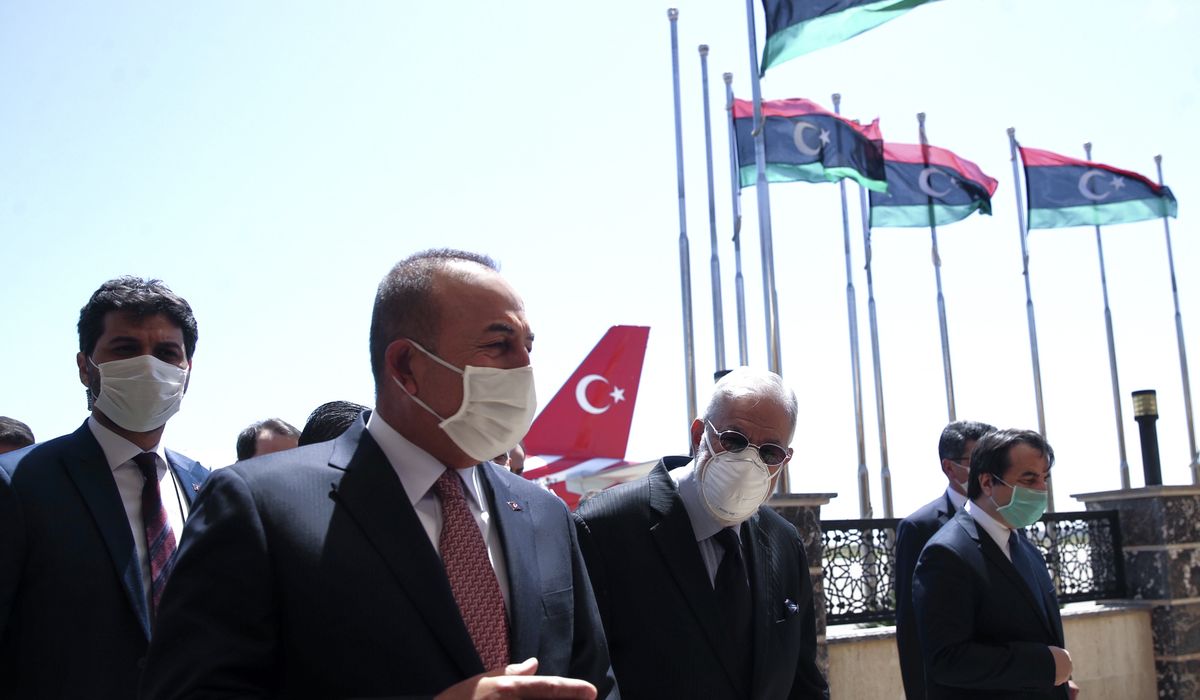 Libya’s slow-burning civil war is boiling over once again as an expanding proxy war between Turkey and Russia, each of which is seeking greater influence in the oil-rich North African nation and across the region in the absence of a clear U.S. policy or role in the conflict.

While Turkey has sought to pull the Trump administration into an alliance in Libya and the Pentagon has escalated its warnings about Russian mercenary activity there, the White House has spent the past three years trying to avoid getting sucked into the power vacuum left by the overthrow of strongman Moammar Gadhafi nearly a decade ago.

The effort may have succeeded in keeping the U.S. out of another Middle East “forever war,” but critics say the administration is essentially engaged in an Obama administration hands-off balancing act that has allowed a messy war — complete with heavy civilian casualties, refugees and mass graves — to draw in countries across the region and make a political settlement unlikely.

Washington over the past year has shifted away from Russia-backed Libyan rebel leader Khalifa Haftar, a former Libyan army colonel with alleged CIA ties, to align increasingly with a U.N.-recognized government in Tripoli supplied by Turkey and defended by Turkish-supplied Syrian militants, all the while complaining of Moscow’s increasing military and political stake in the fighting.

Libya’s power vacuum has drawn other players into the fight. The United Arab Emirates, France and Egypt have lined up with Russia behind Gen. Haftar, while Qatar and Italy have aligned with Turkey in backing the Tripoli government.

Striking recent gains by the embattled Tripoli government, driving back Gen. Haftar’s forces from the outskirts of the capital with the help of Turkish military drones, have scrambled the situation once again. Russian Foreign Minister Sergey Lavrov said Wednesday that Moscow would now welcome any help by the Trump administration to influence Turkey into accepting a truce.

A day later, Turkey, a NATO ally, insisted that Turkish defense and intelligence agencies are eager to work more with their U.S. counterparts toward reaching a solution in Libya, even as the U.S. commanders in Africa issued another warning about Russian support for the rebel forces.

Foreign Minister Mevlut Cavusoglu said Thursday that Turkish President Recep Tayyip Erdogan recently offered to President Trump to collaborate in Libya, and that Mr. Trump responded positively. “We would like to further expand our cooperation areas,” he said in a webinar with the U.S.-based Turkish American National Steering Committee, according to Turkey’s Anadolu press agency.

The White House is notably quiet about the foreign meddling in Libya roughly 14 months after Mr. Trump made headlines by holding a cordial phone call with Gen. Haftar, saying he “recognized” the insurgent leader’s role as a force against terrorists in Libya.

The public image of 76-year-old Gen. Haftar, who was reportedly once close to Gadhafi and played a key role in the coup that brought the obscure army colonel to power in 1969, has since taken a beating in the Western media.

The Tripoli government’s forces this week said they had uncovered nearly a dozen mass graves in the Libyan town of Tarhuna just after the general’s “Libyan National Army” and its Russian backers pulled out of the town. According to Voice of America, more than 150 bodies, including women and children, were exhumed, prompting calls for a U.N. inquiry into possible atrocities.

Libya represents a tempting but double-edged opportunity for outside actors: an oil-rich nation that sits on some of the prime migration routes from North Africa to Europe. The chaos since Gadhafi’s fall has also sparked concerns that a lawless Libya would be a prime base for jihadi groups.

U.S. officials have resisted supporting Turkish military efforts to embrace the Tripoli government because some of the fighters Turkey has sent to Libya are believed to have ties to al Qaeda and the Islamic State. Analysts say Turkey’s aggressive presence in Libya is driven by the Erdogan government’s desire to expand its influence militarily and economically throughout the eastern Mediterranean.

Can Kasapoglu at the Center for Economics and Foreign Policy Studies (EDAM), a Turkish think tank, said Libya is “yet another brick” in an aggressive foreign policy strategy that Ankara has been pursuing in recent years from Syria to the Horn of Africa to now the heart of the Maghreb.

“It is yet another manifestation of Turkey’s expeditionary posture,” he said in a webinar this week hosted by the Jamestown Foundation, adding that Libya is viewed with particular interest by the Turkish military because of its strategic naval location.

“As we see right now,” he said, “one quarter of the Turkish entire frigate arsenal is actually operating in Libya.”

It’s a presence that has been welcomed by the Government of National Accord in Tripoli, which has spent the past seven months trying to warn the U.S. and Europe that the alternative could be an expanded and perhaps permanent Russian presence in Libya.

Government of National Accord Interior Minister Fathi Bashagha told The Washington Times in November that Russia’s successful intervention in favor of President Bashar Assad in Syria’s civil war had emboldened the Kremlin to expand its operations into Libya with the goal of supplanting American and Western influence there.

President Vladimir Putin’s goal, Mr. Bashagha argued, was to exploit Libya’s chaos to expand Russia’s military footprint in the Mediterranean beyond the sole naval base it operates in the Syrian port of Tartus.

U.S. officials were initially skeptical of such warnings. But the growing presence of Russian mercenaries in Libya over the past year has triggered mounting unease at the Pentagon, which made the unusual move of going public with charges in late May that Moscow was shipping Russian MiG-29 fighter jets into Libya to help Mr. Haftar’s forces.

U.S. military officials elevated the warning Thursday, saying Russian MiG-23 jet fighters and Su-24 attack aircraft have also been flown from Russia to Libya via Syria, where their Russian markings were painted over to camouflage their origin.

The jets, which were moved in violation of a recently announced U.N. arms embargo relating to Libya, are being flown by mercenary pilots and being used to support private military companies sponsored by Moscow, the officials said.

About 2,000 employees of the Russian-backed Wagner Group security firm are believed to be operating in Libya, and the Pentagon warned Thursday that their presence is likely only to delay political negotiations that the U.S. and others have called for between the Government of National Accord and the rebel forces.

Air Force Gen. Jeffrey L. Harrigian warned that the insertion of Russian jet fighters into Libya could change the nature of the conflict and intensify risks facing civilians caught up in the confusing struggle.

Gen. Harrigian told reporters the pilots being used by Moscow are likely retired military aviators who were pressed into service.

“They’re working on their basic flying skills,” he said, adding that their apparent inexperience is a danger when operating in a country such as Libya with congested urban settings.