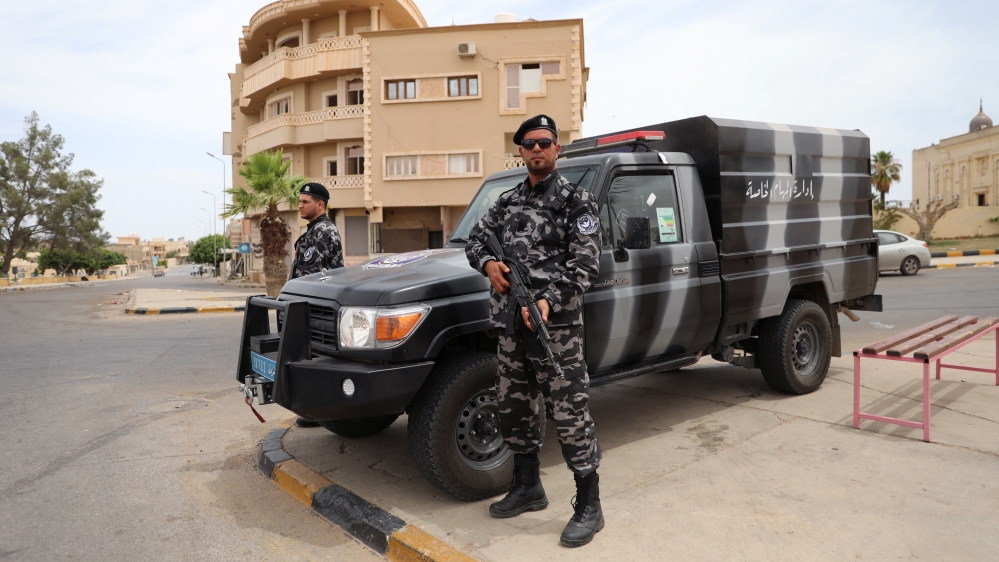 Libya’s internationally recognised government has denounced Egyptian President Abdel Fattah el-Sisi’s threats of military intervention, saying his comments were akin to “beating the drums of war”.
El-Sisi on Saturday warned forces loyal to the Government of National Accord (GNA) based in Tripoli not to cross the current front line between them and forces loyal to renegade commander Khalifa Haftar, whom Cairo backs.
More:

Is Libya’s Khalifa Haftar on the way out?

The Egyptian president, who visited an airbase in Matrouh near the Libyan border, alluded to the possibility of sending “external military missions if required” adding that “any direct intervention in Libya has already become legitimate internationally”.
Abdurrahman Shater, a member of the GNA-allied Libyan High Council of State, said his country’s security and democracy have been in danger since el-Sisi insisted on bringing in military troops that Libyans did not accept.
“Take your hands off us, do not repeat the tragedy in Yemen,” he tweeted.
Shater also said Egypt has intervened in Libya’s internal affairs for four years.

Translation: El-Sisi’s speech in front of a crowd of his army near the border is beating the drums of war. Egypt has intervened for four years, which he denied and claimed his concern for Libya’s security. Libya’s security has been in danger since Egypt’s insistence on undermining democracy and installing a military man whose master we have previously rejected and brought down. Take your hands off us. And do not repeat your tragedy in Yemen.
El-Sisi told his army to “be prepared to carry out any mission here within our borders, or if necessary outside our borders”.
“Sirte and Jufra are a red line,” he said.

Conflict in Libya: Another initiative

Forces loyal to the GNA, which is headed by Prime Minister Fayez al-Sarraj, have driven Haftar’s self-styled Libyan National Army (LNA) from large swaths of territory in the west of the country as well as strategic towns near the capital, Tripoli.
GNA forces have now launched a campaign, moving eastwards, to capture the Mediterranean city of Sirte from forces loyal to Haftar, who was forced to offer a ceasefire after facing a string of defeats in recent weeks.
The ceasefire, backed by Cairo, has been rejected by the GNA and its backer Ankara, which on Saturday demanded that the LNA withdraw from Sirte.
The Egyptian president stressed “any direct interference from Egypt [in Libya] has now acquired international legitimacy, either with the right to self-defence or at the request of the only legitimate elected authority in Libya, which is the House of Representatives [Tobruk].”
With Turkish support, the GNA has reversed a 14-month assault on the capital by the forces loyal to Haftar, who is backed by Russia, the United Arab Emirates and Egypt.
Both Saudi Arabia and the United Arab Emirates have expressed their support for the Egyptian president’s statements.
“Saudi Arabia stands by and supports Egypt on the right to protect its borders and people,” Saudi Arabia official news agency said in a statement.
Additionally, the UAE foreign ministry said it supports all actions by Egypt to ensure its stability and security.
The LNA still controls eastern and southern Libya, including most of the country’s oil facilities, and the city of Sirte, at the centre of a recent military escalation.
Continue Reading…