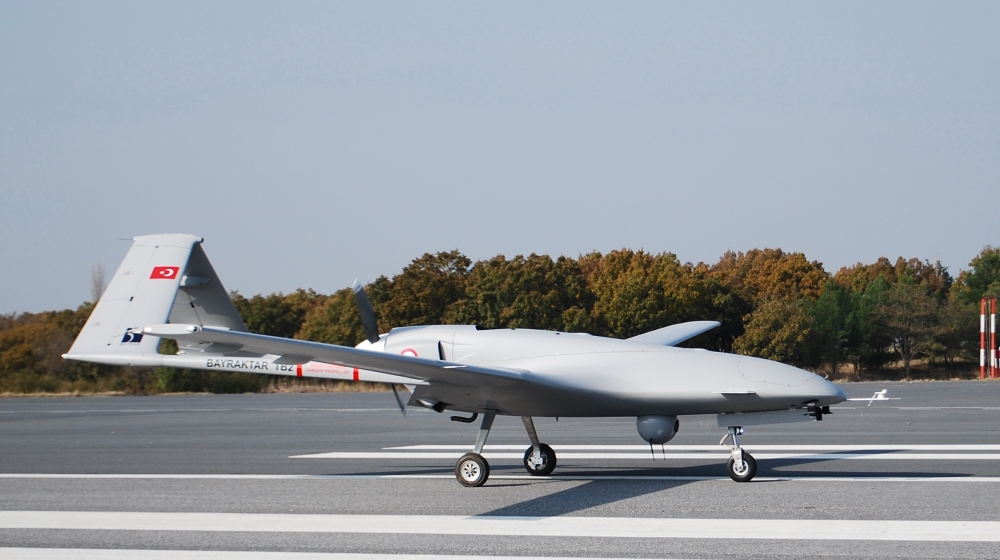 Air power has played an increasingly important role in the Libyan conflict. The relatively flat featureless desert terrain of the north and coast means that ground units are easily spotted, with few places to hide.
The air forces of both the United Nations-backed Government of National Accord (GNA) and eastern-based commander Khalifa Haftar and his self-styled Libyan National Army (LNA) use French and Soviet-era fighter jets, antiquated and poorly maintained.
More:

Is Libya’s Khalifa Haftar on the way out?

While manned fighter aircraft have been used, for the most part the air war has been fought by unmanned aerial vehicles (UAVs) or drones. With nearly 1,000 air strikes conducted by UAVs, UN Special Representative to Libya Ghassan Salame called the conflict “the largest drone war in the world”.
UAVs are useful for several reasons. Not only do they provide valuable information about the enemy that can be spotted a long way off, but they are able to attack any targets immediately with a far higher rate of success. In the event the drone is shot down and destroyed, the pilot is safe, back at base and able to pilot the next drone that takes off.

Russian fighters flown out of western Libya after Haftar retreat

Initial GNA success
The arrival of Chinese-made Wing Loong drones in 2016 made a significant difference to the LNA’s military capabilities. First used in the battle for Derna in eastern Libya, the drones had a decisive impact on the outcome as forces loyal to Haftar battled fighters from the Shura Council of Mujahideen in a brutal battle for the city.
These Chinese-made drones – operated by pilots from the United Arab Emirates (UAE) and flown out of the Al Khadim airbase in the east – have a combat radius of 1,500km (932 miles), meaning they can deliver precision-guided missiles and bombs, striking anywhere in the country.
These drones were used to great effect in the battle for Tripoli, which General Haftar announced in April 2019 against the GNA. Government forces were repeatedly pushed back into a tight pocket as the capital was besieged by the LNA. For all the talk of “precision” air strikes, the civilian casualty toll mounted as targets were hit in increasingly built-up urban areas.
There were now doubts that the UN-recognised GNA, led by Prime Minister Fayez al-Serraj, could hold out much longer, despite support from Italy and Qatar.

Su-35 long-range fighter jets were among those flown into Libya this month [File: Ilya Naymushin/Reuters]

Turkey’s intervention
That all changed in December 2019 when Turkish President Recep Tayyip Erdogan confirmed Turkey would sharply increase its military support for al-Serraj and the GNA.
Along with troops, Erdogan sent Turkish-made armed drones, namely the Bayraktar TB2. Smaller and with a much shorter range than the Wing Loong, the Bayraktar was still able to engage and destroy the LNA’s ground targets, harass its supply lines, and attack forward air bases that were once considered safe. Pro-government ground troops could now advance with air cover, the enemy’s positions known to their commanders.
This, combined with the timely arrival of Hawk missiles, among other air defence systems, meant the main LNA airbase at Tripoli’s Mitiga airport could now operate without fear of attack.

Will setback to Khalifa Haftar change the course of Libya’s war?

The effect was dramatic as the GNA launched a counteroffensive and in a lightning strike seized the coastal towns of Surman, Sabratah and Al-Ajaylat along with the border town of Al-Assah. This was followed up by repeated attacks on the Al-Watiya airbase, which Haftar’s forces were using as their main point of operations.
The airbase was finally retaken on May 18, a severe blow to Haftar’s ambitions in western Libya as not only was it the LNA’s principal headquarters there, it was also his supply and logistics hub.
LNA units were forced to retreat, especially as their Russian-made, UAE-supplied, Pantsir S-1 air defence units were being comprehensively destroyed, leaving the retreating forces with little to no protection from air attacks. Media reports claimed sophisticated Turkish jamming gear was responsible for disorienting the Pantsir’s radar, leaving it vulnerable to air strikes from the Bayraktar drones.

Further advances to the south and east of Tripoli significantly loosened Haftar’s grip on the capital, as forces loyal to him have been forced to retreat. Hundreds of mercenaries from the Russian military contractor Wagner Group have been evacuated from Bani Walid airport.
In an ominous turn of events, the United States Africa Command said Russian fighter jets flew from its Khmeimin airbase in Syria to the LNA-held facility at Jufra, in central Libya, to bolster Haftar’s forces and their allies. Multirole MiG-29s and two Sukhoi Su-24 ground attack fighters were sent along with an escort of at least two Su-35 advanced 4.5 generation long-range fighter jets, in a clear signal to Turkey and the GNA that Haftar’s defeat should only go so far.
The US’s reaction to this has been sharp – the issuing of satellite photos an indication of its concern.

They are flown by Russian military members & escorted by Russian fighters based in Syria to Libya, landing in Eastern Libya near Tobruk for fuel. At least 14 newly unmarked Russian aircraft are then delivered to Al Jufra Air Base in Libya. (2/2) pic.twitter.com/bB9g66pVUc
— US AFRICOM (@USAfricaCommand) May 27, 2020

The potential threat is that Russia could “seize” bases on the Libyan coast and “deploy permanent anti-access, area denial capabilities” creating, according to US Air Force General Jeffrey Harrigian, “very real security concerns on Europe’s southern flank”.
While airpower can at times turn the tide in a military conflict, it has also been used in Libya as a threat-level indicator, a diplomatic tool, and a warning of potential escalation if events are left unchecked.
Continue Reading…

Will the tense India-China standoff at Himalayan border escalate? |NationalTribune.com