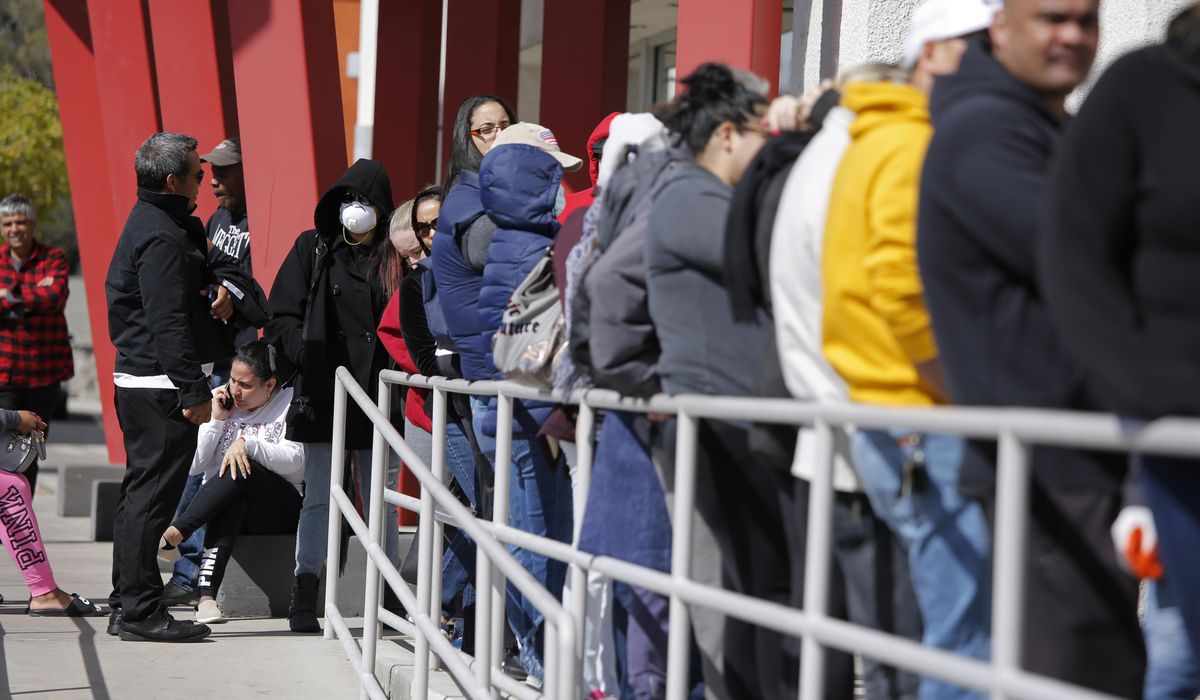 More than 2 million unemployment claims filed last week brought job losses to more than 40 million since the coronavirus shutdown began in March, but the Trump administration and leaders across the country voiced optimism Thursday that the economy will bounce back.

The 2.1 million new claims for unemployment benefits, while historically high, continued a series of weekly declines after the numbers spiked to 6.87 million in late March.

Labor Secretary Eugene Scalia acknowledged that the COVID-19 pandemic has created challenges for workers, but he saw a positive sign in long-term “continuing claims” that were lower than expected.

“I think we can make a lot of headway this year,” Mr. Scalia said on Fox Business. “I think we can start now. … Part of the good news is that we’re not seeing, as of now, the spikes in the return of the virus in those states that have reopened.”

The federal government reported that the U.S. economy shrank at an annual rate of 5% during the first three months of the year, which was slightly worse than the previous estimate, which was made when the bulk of the virus-related economic carnage hadn’t fully materialized.

But even places that experts projected as new coronavirus hot spots, such as the Washington region, are relaxing restrictions as leaders say they have made enough progress on key health metrics.

Most regions in New York, the hardest-hit state with about a quarter of the more than 101,000 deaths in the U.S., are at least partially open for business.

New York Gov. Andrew Cuomo, a Democrat, said a big focus now is getting New York City up and running, though he cautioned that the reopened economy won’t bounce back instantly for everyone.

Mr. Cuomo has come under intense pressure to reopen more of the state after his most dire projections of cases and hospitalizations failed to materialize.

New York Mayor Bill de Blasio, a Democrat, said the city is in a position to start the first phase of reopening next month.

The announcements were made amid mixed economic signals.

The National Association of Manufacturers reported that 34% of its members had a positive view of their company’s prospects, the lowest level in its quarterly survey since 2009.

“Manufacturers have led the country through the COVID-19 response, and America is counting on our industry to lead our recovery and renewal,” said NAM President and CEO Jay Timmons.

With the pandemic stunting domestic and international travel, the airline industry is in acute distress.

American Airlines this week announced plans to cut more than 5,000 jobs, or about 30% of its workforce. Delta and United also are weighing layoffs.

On the other hand, Amazon said it plans to offer 125,000 full-time jobs to the 175,000 people it hired at its warehouses as orders surged during the pandemic. Sales also have picked up at several fast-food chains, including Burger King and Popeyes, as demand for quick, cheap food options soars. Dollar Tree and Dollar General reported strong sales during the pandemic.

Some signs showed home sales picking up in recent weeks after plummeting in April, but market analysts said it is too soon to gauge the damage.

Data on mortgage delinquencies and foreclosures could take longer to digest because of moratoriums on evictions and payments that Congress and various states approved, said Todd Teta, chief product and technology officer of ATTOM Data Solutions.

Mr. Teta said the Northeast and the South had the highest concentrations of at-risk housing in March.

“Those regions generally had home prices that were less affordable to local workers, above-average levels of foreclosure activity and less homeowner equity built up compared to other parts of the country,” he told The Washington Times. “Those are all factors that make a housing market vulnerable to a fall.”

Amid the warning signs for an economy trying to regain its footing, all 50 states have relaxed stay-at-home orders and/or business restrictions imposed to slow the spread of the coronavirus.

“The county leaders aren’t really paying attention to the state plan,” he said. “They’re kind of making up their own metrics.”

Montgomery County Executive Marc Elrich, a Democrat, was jeered as he announced that the county, the state’s largest and the jurisdiction with the most COVID-19-related deaths in Maryland, would move to phase one of reopening on Monday.

Northern Virginia jurisdictions were on track to start the phase one reopening Friday after leaders in the populous region asked for more time.

“We feel comfortable moving forward, but we will obviously be watching the numbers,” said Gov. Ralph Northam, a Democrat.

Other signs show the broader economy inching back to life.

Current, a mobile banking app, has been tracking how its customers have been using their federal stimulus payments.

The company found that the most “immediate” needs of their users, such as getting cash, paying bills and paying back friends, appear to have eased.

Lawmakers are at odds over provisions in the next federal rescue package, but the Democrat-led House on Thursday approved some tweaks to a popular small-business lending program created in a $2.2 trillion rescue package.

The bill gives businesses applying for money through the Paycheck Protection Program up to 24 weeks to use the money for the loan to be forgiven, up from the current eight-week time frame.

Under the bill, businesses also have to use at least 60% of the money for payroll expenses, down from a 75% threshold when the program was approved as part of the $2.2 trillion relief package in March.

“With this new flexibility, our communities will be one step closer to fully recovering from this pandemic,” said Rep. Joe Wilson, South Carolina Republican.

The Trump administration said Thursday that more than 4.4 million loans have been approved and more than $510 billion worth of loans are accounted for.

While popular, the program has been marred by technical glitches and complaints from small-business owners about the limited access to the funds, even as loans were approved for major companies such as Ruth’s Chris Steak House and Shake Shack.

In response to public outcry, some of those larger businesses said they would return the money.