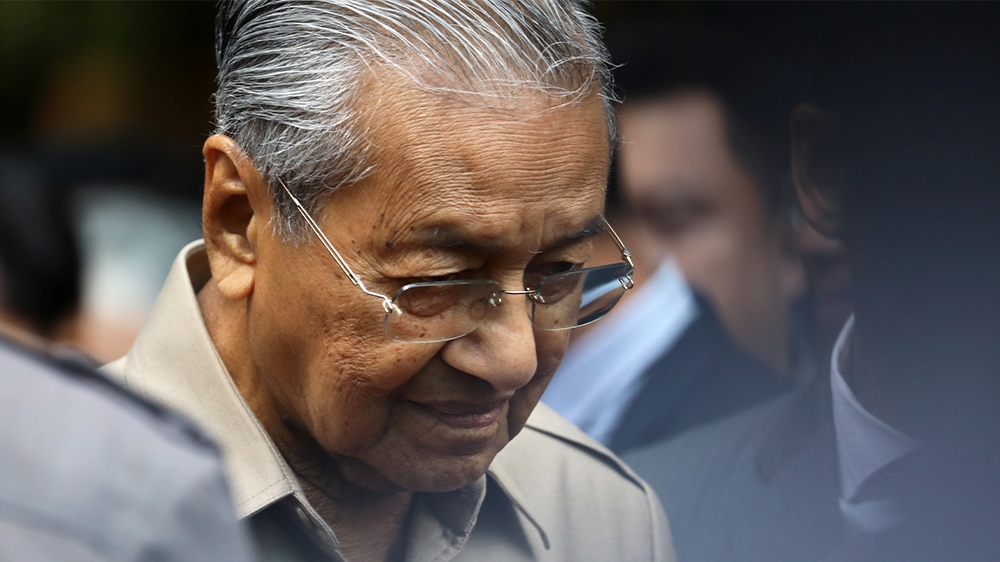 Malaysia’s former Prime Minister Mahathir Mohamad has been sacked by the political party he co-founded after sitting on opposition benches during a May 18 parliamentary session.
A statement on Thursday from the United Indigenous Party of Malaysia, known by its Malay acronym Bersatu, said Mahathir’s membership had been “revoked with immediate effect”.
More:

Is it game over for Malaysia’s Mahathir Mohamad?

Mahathir gives up on confidence vote against new Malaysia PM

Mahathir, who was party chairman, was fired for not supporting Malaysia’s government, which is headed by Prime Minister Muhyiddin Yassin, the Bersatu president.
In a letter circulated widely on social media, the party stated that Mahathir automatically ceased to be a member after he made a show of rejecting Muhyiddin’s leadership as prime minister and party president by sitting with the opposition when parliament met last week.
An aide to Muhyiddin confirmed the letters were authentic.
Mahathir’s office declined an immediate response to a request for comment as it had not yet seen the letter itself, an aide said.
Muhyiddin’s move is being widely seen as an attempt to consolidate power as he faces a possible challenge to his nascent premiership.

Mahathir, now nearly 95, was the world’s oldest government leader until he unexpectedly quit in February, sparking a frantic weeklong power struggle.
The crisis ended with Muhyiddin, who founded Bersatu with Mahathir before joining a four-party alliance that won 2018 elections, being nominated as the prime minister.
Muhyiddin heads a new coalition backed by the United Malays National Organisation, the party once led by Najib Razak, who is on trial over corruption charges dating to his tenure as prime minister up to 2018.
Mahathir, who decided shortly after resigning that he wanted to be prime minister again, bitterly opposed the new government and denounced his former ally as a traitor.
Mahathir sought a confidence vote in Muhyiddin on May 18 but the parliamentary sitting was restricted to an address by King Abdullah, prompting a furious Mahathir to claim “democracy is dead” in Malaysia.
Four other legislators were removed from Bersatu along with Mahathir, including his son, Mukhriz, who earlier this month was deposed as head of the regional administration in Kedah, a state in northern Malaysia, by the same alliance-shifting that handed Muhyiddin the top job.
Continue Reading…