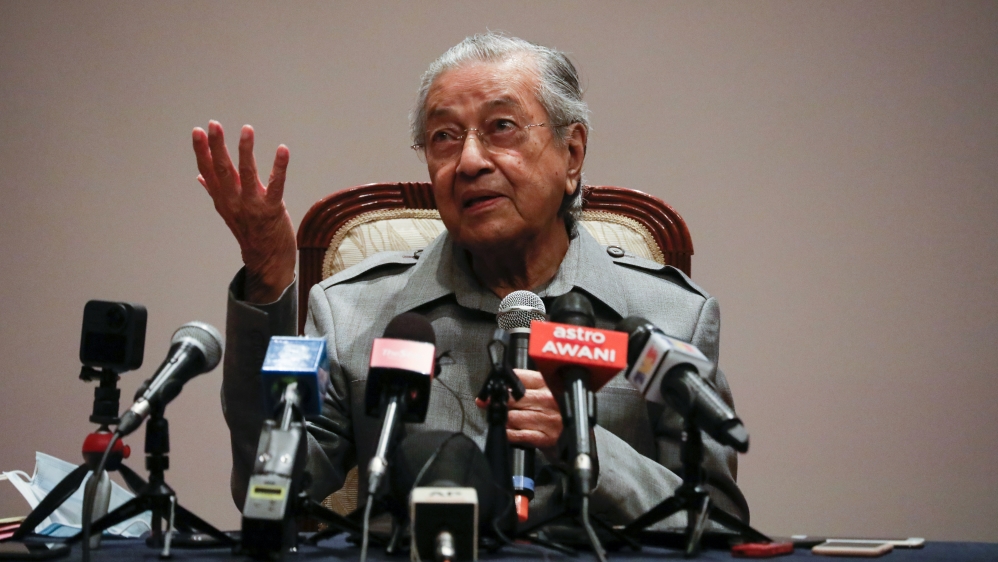 Mahathir Mohamad speaks during a news conference in Putrajaya, Malaysia [File: Lim Huey Teng/Reuters]
Malaysia’s former Prime Minister Mahathir Mohamad and four other former members have promised to challenge their removal from the Bersatu party.
Mahathir, 94, along with his son and three other senior members, were expelled from the Bersatu party on Thursday in the latest twist in a power struggle with his successor.
More:

Is it game over for Malaysia’s Mahathir Mohamad?

“The unilateral action by Bersatu’s president to sack us without valid reason is due to his own fears in facing party elections as well as his unsafe position as the most unstable prime minister in the history of the country’s administration,” a joint statement by Mahathir and the four others said.
The party has been split into two camps since intense political wrangling led Mahathir to resign as prime minister in February and the king to appoint fellow party member Muhyiddin Yassin as his replacement despite Mahathir’s objections.
Mahathir’s son, Mukhriz Mahathir, has since challenged Muhyiddin as party president in a vote that has been postponed due to the coronavirus pandemic.
Mahathir co-founded Bersatu with Muhyiddin in 2016, and the party joined an alliance that claimed a stunning victory in the 2018 polls, leading to the first change of government since independence.
The ruling alliance collapsed after Muhyiddin pulled Bersatu out to work with the former government, which has been accused of massive corruption. Mahathir, a two-time prime minister, resigned in protest.
Mahathir said he still has the majority support of legislators and has called for a no-confidence vote against Muhyiddin.
In their statement, Mahathir and the other expelled members said they may take legal action to challenge their termination and ensure Bersatu is not used as a vehicle for those crazy for power.
Party letters sent to the five said their membership had ceased as they sat with the opposition bloc during a half-day parliament sitting on May 18. But the letter was signed by a lower official who Mahathir’s group and others said had no power to remove them.
Muhyiddin had earlier unsuccessfully tried to reconcile with Mahathir.
The current government includes the party of ex-Prime Minister Najib Razak, who is on trial on charges related to an enormous financial scandal.

Rivalries challenge UN as it marks 75 years since founding |NationalTribune.com

World leaders came together, virtually, on Monday to mark the 75th anniversary of the United Nations, as the coronavirus pandemic and economic disruption challenge the effectiveness and solidarity of the organisation that was set up after the horrors of World War II. Millions of people were forced into lockdown and economies were devastated as COVID-19 began to… 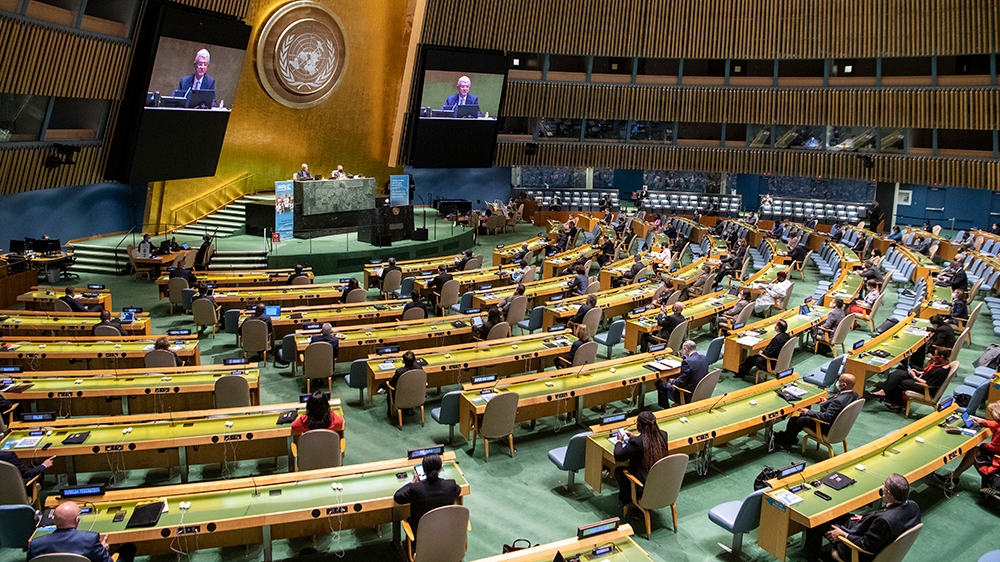 World leaders came together, virtually, on Monday to mark the 75th anniversary of the United Nations, as the coronavirus pandemic and economic disruption challenge the effectiveness and solidarity of the organisation that was set up after the horrors of World War II.
Millions of people were forced into lockdown and economies were devastated as COVID-19 began to spread around the globe earlier this year. Now, some countries find themselves facing a second wave and the 193-member UN has struggled to assert itself in the face of a distrustful United States, an assertive China and a growing rivalry between the two.
On its own website to mark the anniversary, the UN said the event was taking place at a “time of great disruption for the world, compounded by an unprecedented global health crisis with severe economic and social impacts”.
The coronavirus has intensified long-simmering tensions between the US and China. Washington accuses Beijing of a lack of transparency over the outbreak, which began in the Chinese central city of Wuhan late last year.
In an apparent swipe at Washington, China’s President Xi Jinping said on Monday: “No country has the right to dominate global affairs, control the destiny of others, or keep advantages in development all to itself. Even less should one be allowed to do whatever it likes and be the hegemon, bully or boss of the world. Unilateralism is a dead end.”

Xi’s remarks were not in the video he recorded for the meeting. They were included in a longer statement that the Chinese UN mission said was submitted to the world body.
China has portrayed itself as the chief cheerleader for multilateralism after US President Donald Trump’s disregard for international cooperation led to Washington abandoning global deals on climate and Iran, and leaving the UN Human Rights Council and the World Health Organization (WHO).
‘Reasons for concern’
Trump was listed as the first speaker among member states on the UN’s agenda for the event. Instead, it was US Acting Deputy Representative to the UN, Cherith Norman Chalet, who spoke in the General Assembly hall.
The world body had in many ways proven to be a “successful experiment”, she said, but added that there were “also reasons for concern”.
“The United Nations has for too long been resistant to meaningful reform, too often lacking in transparency, and too vulnerable to the agenda of autocratic regimes and dictatorships,” she said.

Al Jazeera’s diplomatic correspondent James Bays said Trump’s absence raised eyebrows.
“People are asking whether this was a deliberate snub or an indication of how important the US feels the UN is in its priority list,” he said, speaking from outside the UN headquarters in New York City.
Other leaders spoke of the need for countries to work together on issues such as climate change and the pandemic, and lamented the rivalries that were undermining the UN and international cooperation.
“Our shared home is in disarray. Our foundations are crumbling,” French President Emmanuel Macron told the assembly.
“Wars of annexation, chemical weapons use, mass detention are all occurring with impunity,” he continued. “Our international system is held hostage by rivalries. It is being weakened by its inability to prosecute individuals responsible for these abuses.”
But Trump chose the moment of the UN’s anniversary to impose sanctions on Iran for violating a UN arms embargo and demanded enforcement by US allies, despite his decision in 2018 to unilaterally withdraw the US from the six-power agreement. Allies says he has no authority to make such demands.
Reform calls
UN Secretary-General Antonio Guterres said the pandemic had exposed the world’s fragilities.
“We can only address them together. Today we have a surplus of multilateral challenges and a deficit of multilateral solutions,” he said. “No one wants a world government – but we must work together to improve world governance.”

The 15-member Security Council took months to back a call by Guterres for a global ceasefire – to allow countries to focus on fighting COVID-19 – as a result of bickering between China and the US.
Several leaders called for reform of the UN and the Security Council in particular, arguing it was unfair that the US, Russia, China, France and the United Kingdom were the only permanent veto-wielding powers.
“A council structure that leaves the fate of more than seven billion people to the mercy of five countries is neither fair nor sustainable,” Turkey’s President Recep Tayyip Erdogan said.
The one-day special event on Monday took place ahead of the annual meeting of world leaders at the UN, which starts on Tuesday. No presidents or prime ministers will be physically present in New York because of the pandemic and all statements have been prerecorded for broadcast in the General Assembly hall.
The UN was created after World War II when countries decided to come together to prevent another such conflict. While there has not been a war of that scale since, leaders adopted a statement on Monday acknowledging “moments of disappointment”.
“All this calls for greater action, not less,” the statement said.
Continue Reading…