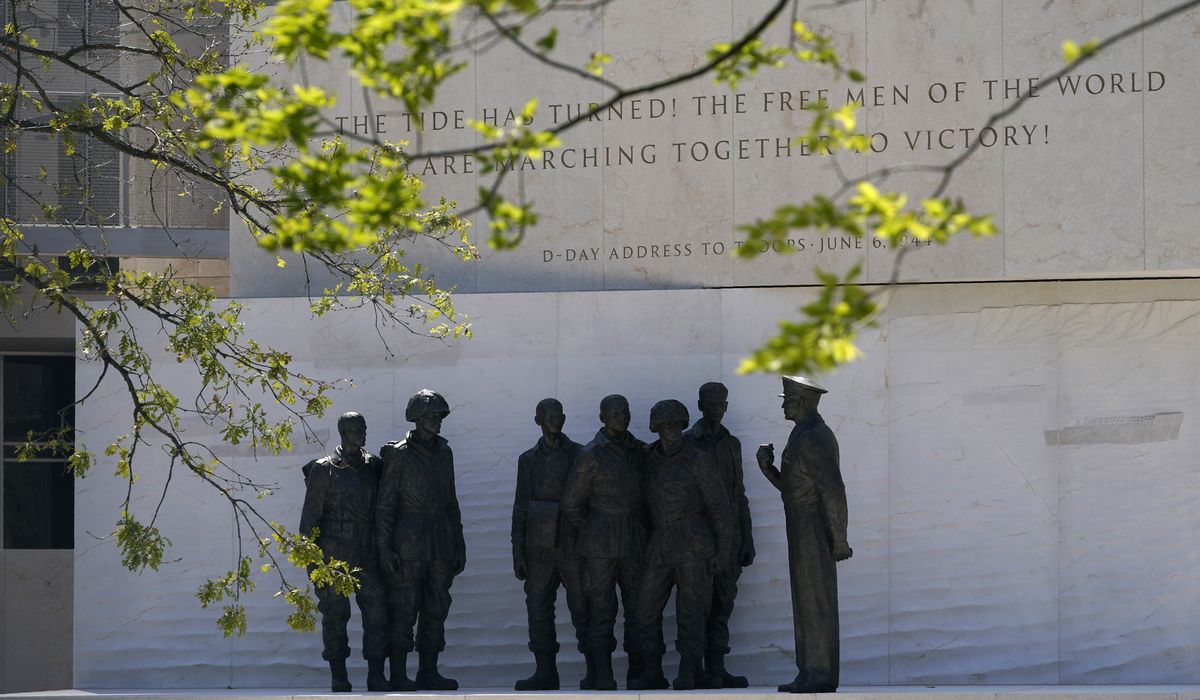 It took less time for Gen. Dwight D. Eisenhower to defeat Nazi Germany as supreme commander of the Allied armies in World War II than it did to design and construct the memorial to him that will be dedicated Thursday in Washington.

A divisive fight over one of America’s least-divisive presidents is over, and the nation’s capital will have a permanent memorial to the man known as “Ike.”

Despite the frustrating delays, Susan Eisenhower, the Republican president’s granddaughter, said the tribute could be coming at just the right time for an unsettled nation.

The $150 million memorial, commissioned by Congress in 1999, pays tribute to the five-star general who led the Allies to victory and later served two terms as the 34th president of the United States.

One big reason for the 21-year gestation period for the $150 million monument was a deep conceptual disagreement between the Eisenhower family and architect Frank Gehry, 91, known for such projects as the visually striking Guggenheim Museum in Bilbao, Spain, and the Walt Disney Concert Hall in Los Angeles.

Mr. Gehry’s initial artistic vision highlighted a sculpture of Eisenhower as a boy, surrounded by giant metal tapestries featuring images of his home state of Kansas.

Eisenhower’s family said the design didn’t adequately address the former president’s full legacy and contributions to America as a soldier and a statesman.

After years of conflict, former Secretary of State James A. Baker III was called in to settle the dispute. He helped cobble together a design compromise that eventually satisfied all parties.

“It turned into a much better end product and a much better end result,” Susan Eisenhower, the former president’s granddaughter, said in an interview. “It’s really a wonderful green space and a lovely place for people to go and meet their friends or have a family outing.”

The memorial is located on a tricky site: an isolated 4-acre public park adjacent to the National Mall and across the street from the Smithsonian National Air and Space Museum. It features bronze sculptures by Sergey Eylanbekov that depict Eisenhower speaking to the paratroopers of the 101st Airborne Division just before D-Day and later as president, flanked by his White House staff in the Oval Office.

“In both of the statues, as wartime leader and then president, he’s not alone,” Ms. Eisenhower said. “It wasn’t all about him. Great events unfold because of teamwork. Everybody in an effort has a role to play.”

The tapestry replaced the scenes of Kansas with an illustration of Pointe du Hoc in Normandy, site of the D-Day invasion. The barefoot little boy who was the focus of Mr. Gehry’s original concept has been preserved but moved to a modest perch at the edge of the memorial.

Ms. Eisenhower said she liked the clean lines and uncluttered look of the memorial. It conveys a simplicity of design that her grandfather would have appreciated, she said.

Sen. Pat Roberts, Kansas Republican and chairman of the Eisenhower Memorial Commission, said he was proud to have been a part of the effort to honor his state’s favorite son.

“The Eisenhower Memorial not only commemorates the life and legacy of an extraordinary man; it also stands as a symbol for all generations of the promise of America and what our values make possible here and around the world,” Mr. Roberts said.

Scholars rate Eisenhower as perhaps the most nonpartisan president since George Washington, said Ms. Eisenhower, who recently published a book, “How Ike Led: The Principles Behind Eisenhower’s Biggest Decisions.”

Despite the sometimes sleepy image of the era, the Eisenhower administration spanned a turbulent time in the nation’s history, marking the dawn of the Space Age and of the civil rights movement. President Eisenhower created NASA and sent Army troops to Little Rock, Arkansas, to protect Black students from a racist mob.

“It was really a transformational time,” Ms. Eisenhower said.

Like most other public events during the COVID-19 pandemic, the dedication of the Eisenhower memorial has been scaled back for health reasons. Social distancing will be enforced for those at the invitation-only event. The dedication will be livestreamed for those unable to attend.

“It’s important to note that Eisenhower’s legacy, as honored through the memorial, transcends one moment in time and must be shared with the world,” said Victoria Tigwell, deputy executive director of the Eisenhower Memorial Commission.

While Eisenhower remains an iconic, almost mythical figure to most of the world, his granddaughter has a more intimate memory of the man. She recalled accidentally leaving a corral gate unlocked while visiting Eisenhower at his farm in Gettysburg, Pennsylvania, after he left the White House. The horses pushed open the gate and stampeded straight for his beloved putting green, Ms. Eisenhower said.

It took about an hour to replace the divots and round up the horses.

“Then I had to go in and face the music. I was frankly terrified,” she said. “Not only did I ruin his golf green, but I was late for dinner.”

Although her grandmother, former first lady Mamie Eisenhower, was mortified, the former president was unflappable as usual.

“He had stayed very calm and watched it all. He looked at me and said, ‘I haven’t seen horses run like that since I was a kid in Abilene,’” she recalled. “He knew that I was not only devastated and apologized but I took responsibility.”

Because she owned up to her mistake, the matter was never mentioned again — even though the putting green had to be taken out the next year.

“He was clearly a disciplined person who could carry a tremendous burden and still focus on other people,” Ms. Eisenhower said. “That was at his core.”

President Trump, current and former military leaders, members of Congress and members of the Eisenhower family are expected to attend Thursday’s dedication. Afterward, the National Park Service will assume responsibility for the memorial.

The memorial opens to the public on Friday.